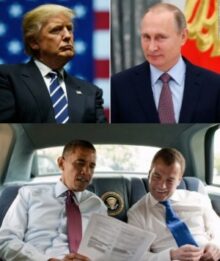 On October 19th, the Jordan Center and the Harriman Institute convened for the latest in their New York City — Russia Public Policy Series. Panelists included Rose Gottemoeller, Thomas Graham, David J. Kramer, and Evelyn N. Farkas, who continued the discussion they began in August at Politico in articles “It’s Time to Rethink Our Russia Policy” and “No, Now Is Not the Time for Another Russia Reset.”

Moderators Joshua Tucker and Alexander Cooley opened the discussion with a question: “What do you think is or are the most important issue(s) in US relations moving forward and how do the two perspectives differ in how they would approach these issues?”

Gottemoeller argued that nuclear conflagration represents an existential threat that the US must counter in any way possible. She insisted that the US doesn’t negotiate with the Russians as a reward for good behavior but because the US must prevent nuclear war. She suggested that other existential threats like climate change and terrorism are common ground where the US and Russia can work together.

She reiterated that diplomacy isn’t a reward for good behavior and argued that military tools can’t be the only tools in the US toolbox and the US must do its best to restore diplomacy in order to deliver tough messages and make Russia understand US redlines.

Graham pointed out that all four panelists can agree on two propositions: that US-Russia relations are at a post-Cold War low; and that current US policy toward Russia lacks coherence and direction.

He divided policy approaches into two camps: the normative approach and the pragmatic approach. Those who take the normative approach, he explained, believe that nothing will change as long as Putin is in power. The pragmatists, on the other hand, are results centered and look for “good enough” resolutions that leave room for later advancements. They have no illusions about the character of the Russian state but can’t wait for a better Russia to emerge.

He identified areas of common ground for both approaches. They both see value in rebuilding ties with allies in Europe and Asia and retaining a deterrent posture, especially through NATO.

They disagree on sanctions. While the normative approach supports sanctions as a response to misdeeds in and of itself, the pragmatists believe sanctions can only be part of a larger diplomatic response.

During the Cold War, he argued, “it is fair to say pragmatism set the course for American policy toward the Soviet Union behind a veil of ideologically charged moralist rhetoric.” Post-Soviet pragmatism, he argued, has been overwhelmed by normative goals. He argued that during the Cold War, pragmatism enjoyed bipartisan support and effectively confronted a rival that was much more dangerous across all dimensions than Putin’s Russia.

Kramer addressed the argument that “We must deal with Russia as it is, not as we wish it to be.” He explored the misdeeds of the Putin regime, including the invasion of its neighbors; support for authoritarian regimes in Belarus, Syria, and Venezuela; bounties on American heads in Afghanistan; interference in US elections and public discourse; use of banned radioactive and chemical agents against its critics inside Russia and beyond its border; support for brutal domestic leaders like Ramzan Kadyrov in Chechnya; arrests of American on spurious charges; rigging of domestic elections; violations of arms control agreements; dangerous behavior toward US aircraft and ships; and violations of the territorial integrity of NATO member states.

He argued that the US hasn’t suffered from a lack of talking with Russia but that negotiations with Russia have gone nowhere. He agreed that US-Russia relations are at a low point.

He argued that Putin is more interested in portraying the US as a threat than improving bilateral relations and prefers to blame the US for Russia’s problems.

He outlined his seven stop signs, as a guide to what the US should stop doing:

He concluded that the US should talk about arms control.

Farkas argued that the biggest issue posed by Russia is its challenge to democracy, the international system, and the rule of law. She agreed about the need for diplomacy and leaving the door open to future opportunities to work together, but, she argued, Russia presents not a “challenge” but a “threat,” and an immediate one.

She argued that diplomacy is not episodic but sustained. She challenged the original writers to outline their proposal.

She argued that the distinction between the normative and pragmatic approaches is artificial and exists only academically. She said the real question is not which approach is best but how do we use all of the tools that we have effectively in order to create the likelihood that maybe Russia will be more cooperative or see us through with minimal risk?

During the response portion of the discussion, Gottemoeller agreed with Kramer’s stop signs. She recounted her time at NATO, saying she brought the Russians to the table and used the venue to deliver tough messages to Russia about Ukraine and Georgia.

She discussed the diplomatic process, arguing that in addition to high level summits, the constant day-to-day interaction is where you deliver tough messages. She pointed out that results don’t always materialize, but the US needs to maintain pressure in the day-to-day slog and iterate and reiterate red lines.

Graham agreed that the US must have a sustained dialogue at the highest levels. He argued that the US is unlikely to get results if dialogue is only episodic.

He argued that he and other pragmatists are not advocating for a reset or Detente but managing a dangerous relationship to avoid an escalation that neither side wants and leaving the door open for future cooperation. He characterized the dialogue as one between competitors rather than partners.

Kramer argued that Russia is not interested in diplomacy. The Russian embassy, he said, is full of spies; its role is not to pursue a constructive dialogue. Conversely, he argued, the American embassy seeks to improve relations but must contend with problems like the prosecution of American citizens. The problem, he insisted, is not a lack of dialogue.

Farkas argued that the “highest levels,” the President and Secretary of State, don’t have time for fruitless negotiations, but it’s important to leave the door open to future cooperation.

During the Q&A, the panelists discussed Putin’s importance to US policy towards Russia. Gottemoeller reflected on her time with the USIA Exchange program. She argued that we need to have strategic patience and imaginative hope that we are seeding a better kind of environment between the US and Russia regardless of who is in the Kremlin.

Graham said, in short, that Putin does not drive US policy toward Russia. He argued that the style of the regime may change, but the fundamental set of attitudes about how Russia positions itself in the outside world is what drives Russian policy. Russia is not a democracy; Russian foreign policy doesn’t need the support of the Russian people, though actions like the invasion of Crimea and support for Assad are popular.

Kramer argued that there is a distinction between what Putin pursues and Russia’s national interests. He said it is not in Russia’s interest that states along its border become increasingly anti-Russian as a result of actions like the invasion of Ukraine.

Farkas argued that structure and people both matter, but that Putin and his cronies want to maintain a corrupt, kleptocratic regime.

Kramer addressed the idea that the two groups have come to different conclusions because of differing assessments of the Putin regime. He said that Graham thinks that Russian foreign policy goals would remain the same with or without Putin, but he (Kramer) disagrees. He argued that Putin has created and enabled a dangerous environment that allows things like the assassination of Nemtsov to happen and that Putin bears most if not all responsibility for Russian misdeeds even if he has not explicitly ordered them.

Graham also addressed post-election relations. He argued that in the US, Russia has become a domestic political issue. He said that he hopes that the US can devote more time to foreign policy challenges after the election and argued that that is more likely to happen if there is a clear result. If Biden wins, he said, it would make sense to set up an interagency to find common ground. He said that engagement should be broad, and the administration should designate a senior official to oversee the relationship and be the primary point of contact for the Russians.