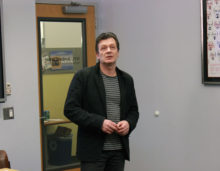 On March 8, 2017, the Jordan Center for the Advanced Study of Russia at NYU held a lecture, “The Golden Age: Anton Chekhov And The Moscow Art Theater,” featuring Aleksey Burago, a world-renowned Russian stage director. Burago, who was introduced by Michael (Misha) Danilin from the NYU Department of Russian and Slavic Studies, is a graduate of the Moscow Academy of Theatre Arts (GITIS) and a protégé of the world famous Russian director Pytor Fomenko. His latest production was an adaptation of Dostoevsky’s Crime and Punishment at the West End Theater in New York.

During his talk, Burago discussed a lesser-known Chekhov and his influence on the Moscow Art Theater. He opened his talk with a clip from French filmmaker Jacques Tati’s 1953 comedy, Les Vacances de Monsieur Hulot. Highlighting Tati’s humility, sense of humor and modesty, “[w]hatever we can find to describe Jacques Tati, we can say the same about Chekhov,” Burago said. “The most important quality of Chekhov is his sense of humor.” Despite the melancholic and depressing tone of Chekhov’s work, “an analysis of events exposes a very funny structure [in his plays],” he added. Based on his experience working in Russia and in the U.S., Burago noted that Chekhov is interpreted differently in both places. In America, the writer is predominantly known as a playwright—and, more importantly, a gloomy one. “Characters often make the choice to drink tea or to kill themselves,” Burago joked. But a more holistic approach to Chekhov’s body of work—including his short stories—as well as a look at his biography, uncovers a more nuanced perspective and tone.

Today, anyone interested in Chekhov and his relationship to his work can read extensively on the writer’s life and take advantage of his published letters and memoirs. To Burago, there is an imperative to explore Chekhov’s world for directors and actors. “Without it, you will fail,” he said. “Your experience is not enough to create what Chekhov meant.”

Much of Chekhov’s work was inspired by the Russian impressionists, including Isaac Levitan and Konstantin Korovin. “He watched Korovin paint and thought, ‘This is the theater I want to do,’” Burago relayed, adding that the playwright wanted to reflect life to its fullest like the colors, contradictions and complexity on his friends’ canvases.

Chekhov’s 1895 theater debut of The Seagull at the Alexandriisky Theater in St. Petersburg was disastrous. But with the support of Vladimir Nemerovich-Danchenko, one of the co-founders of the Moscow Art Theater, founded in 1898 along with the famed director Konstantin Stanislavski, Chekhov gave his unsuccessful play another try. He went on to transform the theatrical experience, as well as the work of Stanislavski. “There is a huge misunderstanding that Stanislavsky created the world of the theatre,” Burago said, “but Chekhov changed his life.”

Before Chekhov, theater was based on the structure of Ancient Greek drama: the cast was comprised of an antagonist, a protagonist and a chorus. Even Shakespeare continued with this same model. “But Chekhov created the ensemble,” Burago said. “It required a new kind of training; it’s like a family.” In fact, Burago added, the theater director, playwright and historian of the Moscow Art Theater, Aleksandr Popov, has said that “Chekhov is impossible to do without family.” The Seagull, for example, portrays the familial bonds in Chekhovian literature. “It’s an intertwining of many difficult relationships,” Burago said. Symbolism also plays an integral role, particularly given the fact that “whatever the characters are saying is not true,” he added. With Chekhov, it is always necessary to remember that his words are open to many interpretations, Burago also noted.

When the lecture opened for questions, Burago was able to speak on his current projects: a production of Chekhov’s Three Sisters and The Swan Song. “What moves you to do these plays now?” one member of the audience asked. “What’s happening in the political realm, […] the unfairness and the ugliness, pushed me [to want to do Three Sisters],” Burago responded. “We have to create more sensitivity for the people we love [and] in Three Sisters, people come together to try to make each other feel better. It’s about life and it’s about partnership.”

The director parted with a few Chekhov-inspired words. “The entropy of life is stronger than our intentions,” he said. Chekhov’s work is grounded in making sense of all the madness, so one can find greater meaning in life. And, Burago added, the playwright’s humor is “a vibration of hope.”