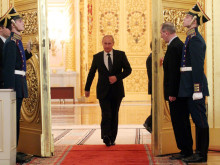 Arutunyan, who was born in the Soviet Union but raised in the United States, is a graduate of the NYU Arthur L. Carter Journalism Institute. Having moved back to Russia in 2002, she worked for the now defunct English-language newspaper The Moscow News. She contributes to a variety of international publications and has just published The Putin Mystique, a book that explores the figure and popularity of Putin among the Russian population. “It gives what is actually a unique perspective on Putin and Putin’s place in Russia,” Galeotti said as he introduced her.

The conversation began by highlighting the importance of understanding the psyche of the Russian people in order to unearth the reasons behind Putin’s continued popularity at home. Galeotti noted how Arutunyan herself, while not “a Putin groupie,” was “hooked on Putin.” Arutunyan went on to convey a picture of the complexities deriving from approaching a study of Putin based on his relationship with the Russian people. In particular, looking at polls, she pointed out how the interaction between state pollsters and the polled subjects is “a mix of fear and expectation of what the pollster actually wants to hear.” According to Arutunyan, Russia displays particular conditions under which fear becomes a factor in the approval rate of the leader and thus justifies a poll placing its popularity between 60 and 80 percent. “There is a difference in ratings in democratic societies and ratings in patrimonial, authoritarian societies like Russia,” she said.

Fear, however, is only part of the picture. “The mystique is a reflection of how people want to be ruled.” In Russia’s case this can be explained by a particular system characterized by Arutunyan defined as a “key duality.” Russia strives towards democratic institutions, but when the rule of law and those institutions prove to be malfunctioning, a “very primitive system of government-based power” steps in to fill a gap. In Arutunyan’s view, however, the existence of a different system doesn’t mean that Russia’s only option is a dictatorship. “I never really believed that Russians have this particular propensity towards despotism,” she said.

At same time, specific factors contributed to shape Russia in a unique way. During the talk Arutunyan mentioned how elements such as size, climate, economy, the legacy of the Tatar Yoke and Byzantium as well as its political and religious doctrine throughout history all played a role. “Take out a single factor and it wouldn’t be the same,” she said. In response to her statement, Galeotti asked: “Is it purely that they are therefore doomed by the historical legacy […] or we can look at more recent things that have ensured or have helped nudge Russia in this direction?”

Arutunyan replied that the Soviet experience and Stalinism had a particular impact and that, even though she did not cover this aspect in her book, the Stalinist period had drawn her attention before she moved back to Russia. “I was fascinated by Stalin’s period precisely because it was this ultimate display of how people fell in line and killed people in the name of this man,” she said. “What were they feeling when they fell under this system and became part of it?” According to Arutunyan Russia has not fully dealt with that particular experience, but that background is constantly present as a “cultural thread” that has been exploited by Putin.

Another issue Arutunyan commented on during the talk is the heterogeneous quality of the system established in Russia by the Russian leader. Outlining how elements of rule of law exist in specific regions, she discussed the relevance of Moscow as an outlier due to its somewhat functioning legal structures (that, as pointed out by Galeotti, is connected to the fact that the city receives a large portion of the federal budget).

Moving on, Arutunyan recalled an episode that took place in 2009 in the town of Pikalyovo. In Soviet times the city was dependent on “a wonderful little chain that functioned”: three factories producing minerals ensured jobs and survivals to the locals. In the free market economy, the factories didn’t perform equally well. Russian oligarch Oleg Derispaska, the owner of one of the three factories, was faced with economic difficulties between 2008 and 2009. As people in Pikalyovo were getting laid off and put on paid leave without receiving their salary, social unrest grew. Under those circumstances Putin proved to be the only person able to give the protection and security that they needed: the leader flew in and, in a highly publicized encounter, forced Deripaska to pay off the overdue wages. Deripaska appeared humiliated when, in a likely staged move, Putin coldly asked for his pen back after handing it to the oligarch to sign a contract to resume operations in the factory. “It was just beautiful to watch,” Arutunyan recalled.

The Pikalyovo episode revealed a deeper feature of the Putin regime. “You depend on the tsar to protect you – the peasant – from the evil boyars.” Discussing more in detail the figure of Putin, Arutunyan emphasized other qualities of the leader that are important in explaining the mystique. “He is not nearly as brutal as people imagine it to be,” she said commenting on how the leader compared favorably to the figure of the murderous Stalin. “I have actually met a lot of people who hate Putin because he is not Stalin.” The traumatic legacy of the 1990s also plays a role when, to the eyes of the people, Yeltsin failed. “Putin came in and started giving people what they wanted,” according to Arutunyan.

Another question explored by Galeotti and Arutunyan focused on the limits on Putin’s power. In Arutunyan’s words the leader “can’t fix the system, even if he wanted to.” At the same time, she admitted how the many priorities faced by Putin mean that fixing the system is not at the top of the list. Galeotti then proceeded to ask: “How far should we consider Putin a victim of the system? […] Should we feel sorry for poor little Putin?” Arutunyan’s response reflected the ambivalence of her feelings as outlined in her book. “I think that’s up to you. I don’t feel sorry for Putin. But then again, sometimes I do,” she said, highlighting the importance of recognizing the limitations of a system whose reins he was given but that he had played a minimal role in creating.

Analyzing the ways in which the people respond to Putin’s role as a leader and accept the system, Arutunyan reflected on the importance of understanding that Russians “don’t know how to live in another way” and have created an alternative model to that commonly accepted in the West. For example, corruption is not necessarily seen as an absolute evil, because people “suffer from it but also benefit from it.” She also discussed the evolution of Putin’s personality cult that started out as a spontaneous postmodern and jokey movement but has grown into a weapon exploited by the Kremlin. “I got the sense that they had to be approved by the Presidential Administration,” she commented.

To conclude, Arutunyan went on to discuss the future of Russia. She identified two major issues that are of particular relevance: the economic crisis and its worsening due to the economic sanctions, as well as the declining oil prices. Introducing the question of Ukraine and Novorossyia, Arutunyan acknowledged the role of the propaganda machine in “making people believe that this is part of Russia.” Tapping into the nationalistic force within the country to support him during his third presidential mandate, Putin has created a situation that is going to be difficult to deal with. “Putin can’t really back out,” even if he comes out as a sort of moderate in comparison to the nationalists. “Now it is not clear if he is going to be able to contain it. I don’t think he can. He is now walking on the edge of a razor blade,” she said.

In the final part of the evening, Galeotti opened the discussions for questions. A member of the audience asked what would have happened if Gorbachev had not been ousted, in response to which Arutunyan highlighted how his fall was in many ways inevitable. “Gorbachev is still reviled by a big chunk of the population for Perestroika,” she said. In response to a question regarding Crimea, she noted how in Russia, even among the staunchest figures within the opposition, many saw the annexation of the peninsula as entirely justified. At the same time she dismissed the idea according to which he might be trying to restore the Soviet Union. Once again, she emphasized the psychological elements in play, by pointing out how Euromaidan “created the danger of another neighbor of Russia joining NATO,” which might explain Putin’s reaction.

After Arutunyan equated Putin’s to a school lunch comprising potato chips and Twinkies (“you know it’s bad for you” but “it tastes good”) the discussion came to a close with a reflection on the ways in which the West interprets the situation in Russia, failing to see how Putin’s regime is “an effect the structure makes it predisposed to”, rather than a cause. “We need to stop looking at it as a problem to be fixed,” she said. “The problem is not that people want a dictator, the problem is that they want a dictator to fix these problems.”