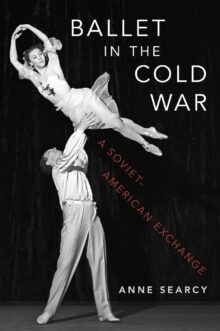 On February 5th, the Jordan Center welcomed Professor Anne Searcy for a talk on the exchange of Soviet and American ballet troupes for cultural diplomacy during the Cold War. In October 1962, New York City Ballet (NYCB) toured the Soviet Union, performing seventeen ballets by George Balanchine. Part of the Soviet-American cultural exchange, the NYCB tour was positively received by the Soviet audiences but has since been misunderstood as a sign of political protest. Searcy explored the Soviet responses to Balanchine and his company and argued that the Soviet viewers interpreted these new works through Thaw-era debates about choreography and music. The talk was hosted by Anne O’Donnell, Assistant Professor of Russian & Slavic Studies at New York University. Stream it here.

At the height of the Cold War, both the United States and the Soviet Union boarded their ballet companies – sometimes over 100 dancers, stage managers, musicians, and administrators – on jet planes and flew them around the world to give 2-3 month-long tours in other countries.

“For both governments, these tours were a way of impressing foreign audiences with their country’s artistic accomplishments,” explained Professor Searcy.

Contextualizing the cultural exchange between the two superpowers in the legacy of the 1958 Lacy-Zarubin Agreement, Searcy located a rupture in the history of ballet. It ceased being an idiosyncratic Russian art form but became a prominent arena for Cold War conflict. Commissioned by the US State Department’s fledgling cultural diplomacy program, NYCB toured the Soviet Union in 1962, making stops in both Moscow and Leningrad. Initially anticipating sharp criticisms and popular outcry against the company’s artistic director George Balanchine — an innovator in the world of neoclassical abstract ballet — the American observers of the NYCB tour were surprised by the public affirmation they ended up receiving from the Soviet audiences in multiple cities.

The Soviet people’s enthusiasm for NYCB, however, did not indicate Balanchine’s development as a choreographer or the US’ triumph in the Cold War. Instead, countering the American Cold War dance historiography, Searcy employed Soviet sources to reinterpret the Soviet praise of Balanchine as not a repudiation of the government and arts of the USSR, but as a reflection of the complexity of the Soviet aesthetics at the time.

The talk moved on to explore Balanchine’s works and the ways in which Soviet critics and audiences were able to appreciate Balanchine while reframing his works through a number of different official Soviet lenses. George Balanchine, himself born in Russia, studied at the imperial ballet school, and emigrated in 1924, was considered an outsider to the political and aesthetic climate of the USSR. A founder of NYCB, Balanchine was famous in the US for creating abstract ballets that revealed the form of musical composition, without using stories or elaborate sets or props. Searcy stressed that many contemporaries like Lincoln Kirstein considered the very basis of Balanchine’s aesthetics to be in stark contrast with realistic, narrative-driven ballets favored by Soviet companies.

Searcy even cited the American critic Allen Hughes’ New York Times article: “How will the Soviets respond to the abstractions of Balanchine’s choreography?… it will be a miracle if the Russians understand what balanchine is up to.”

However, while it may be true that the early Soviet ballets (e.g., drambalet) tended to be massive two-hour socialist realist works, the death of Stalin and the subsequent era of Thaw triggered a new generation of artists and art theory that were selectively neglected by American dance historians. Among them was a new type of dance called choreographic symphonism.

“Instead of focusing on ballet’s ties to dramatic theater and literature, choreographic symphonism wanted to turn towards its similarities to music,” explained Searcy. “Many argued that choreographers should make use of musical techniques, such as motif development and counterpoint, to create continuous dancing, rather than interruptus dancing for silent acting, as often happens in the drambalet.”

Searcy then showed video and image samples to demonstrate the resemblance of choreographic symphonism with Balanchine’s oeuvres.

Contrary to what the American critics suggested, the Soviet audiences did not fail to understand NYCB — nor did the Soviet fans of Balanchine necessarily have to abandon Soviet aesthetics or values in order to do so. They simply reinterpreted the visiting ballets within their own frames of reference to Balanchine, as Balanchine’s works explore the formal abstract beautiful properties of classical music.

“For many of the Soviet Union dance communities, the same works could explore humanist even socialist values,” said Searcy.

In the Q&A session, questions regarding government official involvement in and sponsorships of the cultural programs of the likes were brought up. Professor Searcy answered by supplementing the governments’ reactions to the exchange from both sides. “Americans were a lot more surprised than their Soviet counterparts [that] nobody said anything horrible about NYCB,” said Searcy, adding on to the significance of this event in light of the Cuban missile crisis having just recently transpired.