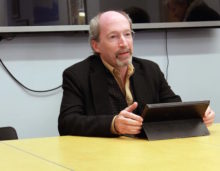 On February 22, 2017, the Jordan Center for the Advanced Study of Russia at NYU welcomed Benjamin Nathans for a colloquium entitled, “To the Success of Our Hopeless Cause: A History of the Soviet Dissident Movement,” based on a chapter, “Chain Reaction,” in his forthcoming book. Nathans, who is the Ronald S. Lauder Associate Professor of History at the University of Pennsylvania, was introduced by Yanni Kotsonis, Professor of History at NYU. The event was co-sponsored by the History Department and the Hebrew and Judaic Studies Department at NYU.

Nathans’ book takes a look at the origins of the Soviet dissident movement, who its main characters were, and what a civil rights movement looked like in the socialist world, with a time frame spanning from the late 1950s up to the early 1980s. “I will argue that we don’t know what the long term impacts of this movement would have been had Gorbachev not adopted many of its ideas and slogans and applied them from the top down,” he said. The project also incorporates a comparative component, as the Soviet dissidents were not the only civil rights movement of the time. At least chronologically parallel to the the rise of human rights nongovernmental organizations like Amnesty International and the American Civil Rights Movement, what set these Soviet dissidents and their social networks apart, Nathans said, was that “the setting was strange for a civil rights movement” and in examining the Soviet movement, their “bonds of friendship […] no longer [dealt] with a face-to-face community.” Instead, it was the product of a chain reactions, that sometimes crossed and sometimes didn’t. In Nathans’ own words: “the individual events comprising successive phases of the chain reaction were strikingly different, their effects not merely additive but transformative.”

Another time-sensitive aspect of the story that both informed and provided analytical fodder for Nathans’ thesis was that the Soviet dissident movement “unfolded during a period where we were approaching the moment of media saturation.” High-level journalistic studies of this movement, which include interviews with current and former dissidents, like Joshua Rubenstein’s Soviet dissidents: Their struggle for human rights, as well as memoirs by dissidents themselves, have provided the basic plot of the story. But, Nathans said, “we don’t know the drama behind the plot”—some protagonists have been miscast, some have been misrepresented, and others remain underrepresented. “There is a tendency to look at this story through rose-colored glasses. It’s very challenging writing about these people because there is an aura—a kind of hagiography—that surrounds most of them,” Nathans said. “What I want to do is bring these people into or back into circulation.” In closing, the historian added that he had no intention of writing a cynical history of the dissident movement, but rather a sober one. “The highest form of homage is to treat them with the seriousness that real scholarship has to bring, [to give] a deeper understanding of the human drama,” he said.

In the Q&A session that followed, Nathans answered questions that expanded upon the coherence, the lineage and the legacies of the Soviet dissident movement. Jane Burbank, Professor of History at NYU, wondered how the movement was shaped over time. “How do you conceptualize the expansion of dissident movements?” she asked. “Did [the Soviet dissidents] ever move out of the molecular society of small groups, families, and friends to something that we call a ‘public culture’?” In response, Nathans began by stating that he has tried to “push back on the classic image of totalitarian societies as atomized,” showing instead that they were based on extremely compound models. While the dissident Alexander Volpin, for example, “aspired to transcend those friendship circles (or kompaniya) based on intimate friendship and knowledge of each other,” that dream never reached fruition, he explained. In fact, the networks of distribution of dissident material were wide enough that people did not know one another—this was gratifying for Volpin, among others. Moreover, the apex of the movement’s coagulation can be seen in the periodization of samizdat with the Chronicle of Current Events. But more importantly, dissident memoirs give the sense that the movement allowed people to escape their own social circles. “So much of life was organized by work, that people often times found themselves trapped,” he said. “In the dissident movement you would meet people you never would have otherwise”—like in the psychiatric hospital, Nathans joked.

Responding to a question by Yanni Kotsonis, Nathans also touched on the lineage of the Soviet dissidents. “The dissidents themselves were eager to have a lineage and the 19th-century Russian intelligentsia was default,” he said, adding that it was not just the best, but the most plausible ancestry for the movement. Still, he said, “[t]aking [the intelligentsia] as their forebearers is significant, but I don’t see it as a continuation.” The 19th-century intelligentsia had a solid political stance, the option of going abroad, and confidence that they were on the “right” side of history, all of which were lacking when it came to the Soviet dissidents. “That ethos was adopted wholeheartedly by the Soviet state,” Nathans explained, whereas “the 1960s dissidents had a cynical view of history.”

David Engel, Professor of Hebrew and Judaic Studies at NYU, also wondered about how Soviet dissidents reacted to protest activities elsewhere in the world, particularly, the Prague Spring in 1968. Prague was an acute platform to humanize socialism—not to overthrow it—but it did not have a particularly legal bent, which stood in opposition to the Soviet dissidents, Nathans said. What’s more, Soviet dissidents differed largely from the students in Prague, and not only because they were of an older generation. “They were a tiny island in an ocean of Soviet people,” Nathans said. “They had a hopelessness—a sense that history was not on [their] side.” Many of the Soviets came from scientific backgrounds and they thought like scientists, he added. “These were not messianic figures out for symbolic victories.”

Finally, Joshua Tucker, Director of the Jordan Center, inquired as to how the dissident information network and letter-writers in opposition to that network compare to the media ecosystem after the digital revolution, especially given the presence of online Russian trolls. Tucker pointed to a quote in Nathans’ paper from a Soviet woman’s vitriolic letter to the physicist and dissident Pavel Litvinov, after “accidentally” hearing him expose threats made by the KGB on the Voice of America. “Do you think this was individually motivated or was there any sort of coordination of this letter writing by agents of the state, agents of the party?” Tucker asked. Nathans argued that both dissidents and their opponents wrote letters to state officials and to the Soviet population, and that at least in this example, he regards the words as completely sincere—“we, at our peril, regard that as a ‘troll’ operation” only in the contemporary moment, he said. Further, and in regards to modern media, “the Internet is good at establishing thin connections, but not maintaining them over time or under pressure,” Nathans argued, which highlights “how relatively protected from state penetration samizdat was.” There were only a handful of KGB forgeries—which can be likened to today’s “fake news”—and people smoked out those documents very quickly. “Ironically,” Nathans concluded, “the Internet seems to be more susceptible to the state.”