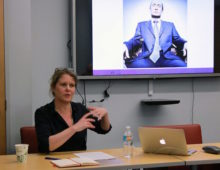 On Friday, April 28th 2017, the Jordan Center for the Advanced Study of Russia hosted a panel event entitled, “The Use of History in Shaping Identity: Russia under Putin.” The panel featured Flemming Splidsboel Hansen and Cecilie Felicia Stokholm Banke from the Danish Institute for International Studies (DIIS) and was moderated by Joshua A. Tucker, the Jordan Center Director.

Flemming Hansen, Senior Researcher in International Security at DIIS, started off the panel with a presentation based on his work on Russian identity politics, which focused on the concept of “ontological security,” contemporary Russian understanding of self, and the sustainability of this identity.

Hansen started off by defining “ontological security,” a concept from security theory that has to do with the security of the self, or “the feeling that something exists.” In social sciences, Hansen explained, this self is used to refer to an inner core of the individual. The concept has been used in psychology for decades and the term has been applied in security theory for the past decade, Hansen said. At the individual level, this sense of self is formed “in the first years of existence,” although if not established then by the primary caretaker, it may never develop. Because ontological security is “maintained through stable relationships and predictable roles,” Hansen said, “people who lack it are often confused about their own roles, as well as the roles of others.”

Crucially, just as individuals need a continuum between norms, identity and interests, Hansen argued, the same goes for states. This point, when a concept that’s used on the individual level is brought up to the level of the state, had been controversial according to Hansen, who thus encouraged the audience to join in the debate. “Some might think it’s unacceptable to take something individualistic and apply it to states and even groups of people,” Hansen said, bringing up his earlier phrasing that Germany as a country had committed suicide and had to reinvent itself.

In the case of Russia, where Hansen applies his argument, the sense of ontological security is based on earlier identities (such as Russia’s Soviet past), and is constantly renegotiated. Hansen argued that “Putin has given Russians a much clearer understanding of what it means to be Russian today,” adding that this can have both positive implications (contrasted with the “ontological confusion of the 1990s,” for instance) and negative ones, because this ontological security has mostly been acquired through conflict.

The sense of ontological security under Putin has been achieved through meta-narratives and smaller ones derived off of it, according to Hansen, who noted that today “many European countries suffer from a lack of meta-narratives, even at the level of the European Union.” In order to illustrate how these meta-narratives serve contemporary Russian identity, Hansen turned to state-controlled Russian media, which he said “plugs into the meta-narrative and subsequently smaller narratives built on that basis.”

Putin’s, and Russia’s, meta-narrative is “constant conflict with the West,” Hansen argued. Russia sees itself as a victim of non-linear warfare by the West with no clear starting point and no end in sight. Thus, “existential wars” like the Second World War, for which Victory Day celebrations were reintroduced by Putin, or even history dating as back as the Russo-Polish War could be evoked as part of this conflict. Hansen also referred to [Russia’s Chief of General Staff Valery] Gerasimov Doctrine, which stipulates that “non-kinetic operations,” non-combative, non-linear war that includes kompromat or other media operations should be at a four to one ratio to kinetic operations. In this way, the Russian population is told that “they are at war even if nobody is shooting at them,” Hansen said.

“There is a political instrumentality to this,” according to Hansen. Thanks to a vision of Russia as under pressure from the West, “being Russian in the world today means to be in constant struggle,” he said. The paradox, he pointed out, is that increasing identity or ontological security requires a decrease in material security in this model.

Cecilie Banke, Senior Researcher at the DIIS in Foreign Policy, said her presentation, titled “History and the Politics of Memory in EU-Russia Relations since the Crimea crisis,” would be from a European angle, putting the spotlight on how the picture painted by Hansen affects the relationship between Europe and Russia.

Banke started off by noting that to an American audience, it may seem “peculiar” to base a presentation on EU-Russia relations on the memory and discourse of the Second World War, but that the event’s memory carried meaning for “Europeans that might be missing in America.”

Banke’s central argument was that both Russia and the West instrumentalized historical memory during the Ukraine crisis, but the main result was a challenge from Russia to the EU’s claim to be representing Europe with a certain set of norms and values. Banke argued that Europe was already suffering from a crisis of legitimacy prior to the (unforeseen) conflict, which ended up not only deepening the rift between Russia and the EU, but created “sincere disenchantment with Europe, not just in the EU but outside of it, with aspiring member states.”

As Ukraine proved to be the most severe crisis since the end of the Cold War, the EU quickly discovered, Banke said, that including Ukraine within European norms and values was not going to be easy, but the crisis “challenged their role as a global player” further. The internal split on how to deal with Russia galvanized the reasons for the populists’ rise, while Brexit and the refugee crisis made it worst, Banke explained, leading to more isolationist and protectionist attitudes.

In explaining how Russia managed to turn the memory of the Second World War into a useful tool in its campaign against Europe, Banke said she turned to memory studies: While Russia inherited a legacy from the Soviet Union in using lessons of history to discredit other countries, Russia did the same not to discredit whole states, but the EU’s entitlement to represent true values of Europe, or Europe as a whole. History was not just instrumentalized by commentators and journalists, but by politicians, as Banke showed, as “analogies become tools in making decisions in times of crisis.”

When Russia first threatened to annex Crimea, Western leaders likened it to Germany’s annexation of Sudetenland, an analogy used by the speaker of the Czech Senate and Hillary Clinton. Saakashvili wrote in the Post warning about repetition of history, “Many in the West are talking about the need to reach some kind of compromise with Russia, an option that smacks of Munich 80 years ago.”

Similar evocations were made on the other side, Banke said, for instances with references to the sudden and violent breakup of Yugoslavia. Likewise, the historical split of Ukraine into West and East, deepened during Holodomor and then during the Nazi invasion, “feeds into the current conflict,” Banke noted, adding that the implications of the split do not just concern the boundaries of the Ukraine-Russia conflict. “Recurrent Russian references to neo-Nazis and fascists should be seen against this background,” Banke said.

World War Two wasn’t the only historical analogy employed at this time. For understandable reasons, the German chancellor Angela Merkel rather looked at the First World World, “warning her allies to not sleepwalk into a new war.” The downing of the Malaysian plane was likened to the assassination of Franz Ferdinand in 1914. Another historical analogy triggered by that event was the 1980 shooting of South Korean aircraft that killed all passengers, representing one of the iciest moments of the Cold War, Banke reminded.

Banke concluded that the Maidan protests in the end caused a deeper split between Putinist Russia and the West, with “Putin contesting EU’s hegemonic right to speak and act on behalf of the continent.” Even if Putin’s political language may seem to be of a bygone era, Banke said, it had a deep resonance, and not only in Russia.

“The constant references to the past have served to legitimize political and military actions. But they may actually be counterproductive, because when history is written backwards, the stage is set for self-fulfilling prophecies,” Banke said.