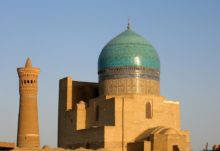 According to Pauline Jones, a key puzzle faces those who study the political economy of religion. The literature suggests that countries with religious monopolies—that is, a single, state-backed faith—might see lower levels of religious engagement. With only one kind of “product” on offer, adherents might feel less enthusiastic about “buying” it.

“The problem with this is that when you look at the predominantly Muslim world, you find that, paradoxically, religious monopolies … are ubiquitous,” Jones said. “And yet you have high levels of religiosity across the board according to very robust survey data, and you have varying degrees of political mobilization. So how do you make sense of this?”

In a talk at the Jordan Center on April 18, Jones presented a new model for classifying types of religious regulation, which might explain the monopoly versus religiosity conundrum in Muslim-majority regions like Central Asia. Jones is a professor of political science at the University of Michigan and director of its International Institute.

Rather than treating all religious monopolies the same, Jones differentiated between types of religious regulation. The first, government subsidy, is either general or targeted. General subsidies benefit all Muslims and include measures such as declaring Islam the official state religion, constructing Muslim prayer rooms in public buildings, and constructing mosques. By contrast, targeted subsidies benefit only Muslims belonging to a single, state-approved interpretation of Islam. These include the state sanctioning a particular length of facial hair, a particular color of hijab, and other markers that differentiate religious sects—or even tendencies within a single sect.

Religious regulation can also mean repression, and this, too, comes in different flavors, Jones said. Low repression means that religious restrictions are minimal or not actively enforced. Or if they are enforced, the punishment is relatively mild. Within this category, Jones included laws regulating the celebration of Ramadan or banning loudspeakers. By contrast, high repression might mean forcing men to shave beards, closing mosques, or firing imams. What matters most is actual enforcement of religious regulations, since some countries might have strict laws on their books but allow infractions to slide.

Jones emphasized that religious regulation within a country can change within months, even weeks, subject to the vagaries of state policy. For example, Uzbekistan has long tended to employ high levels of repression against those it considers to be religious dissenters, but the state’s definition of illicit religious practices has changed over time.

Given this diversity of regulatory environments, Jones predicted that citizens would respond with different forms of political mobilization. For example, in an “exclusive” environment of high repression and targeted subsidies, those in the subsidized in-group are likely to support and directly engage with the state, while those in the unsubsidized out-group are likely to exit political life, possibly by resorting to violent resistance. Switch to a “discriminatory” environment of low repression but still targeted subsidies, and those in the unsubsidized out-group become more likely to publicly oppose religious regulation, rather than retreating from politics.

With this framework as background, Jones conducted preliminary tests of her theory on the countries of Central Asia. She predicted that if religious regulation among Central Asia states becomes more similar over time, then forms of political mobilization would also become more similar. She found that, since independence, Kyrgyzstan and Tajikistan have moved closer to Uzbekistan’s “exclusive” model of high repression of dissenters and targeted subsidies for approved sects.

Since her theory predicts fewer protests and more exits from political life within an exclusive regulatory environment, Jones measured religious protests per year in each of the three countries. She found that, indeed, protests decreased as the countries converged on a similar regulatory model. Some of those choosing to exit political life, rather than protest publicly, may have made up the ranks of Central Asians who joined the Islamic State jihadist group. Indeed, citizens of Uzbekistan, the most repressive of the three countries, constituted the largest share of IS recruits.

One implication of Jones’s theory is that harsher religious regulation might create a positive feedback loop that leads to ever stricter controls. Once states “start down the path of religious regulation,” they may drive the religiously unorthodox out of political life and toward violent extremism, thereby prompting even more state repression.