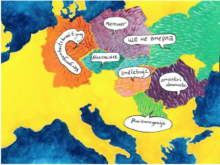 On March 11, Jordan Center’s Professor of Russian Eliot Borenstein (New York University) hosted José Alaniz (University of Washington), Martha Kuhlman (Bryant University), and Biz Nijdam (University of British Columbia) for a talk on their recently published edited collection Comics of the New Europe. This edited collection offers insights into the comics cultures of a number of post-socialist countries including the former East Germany, the Czech Republic, Slovakia, Poland, the former Yugoslavia, Hungary, Romania, and Ukraine. It shows that a new generation of cartoonists is reexamining and reevaluating not only their respective comics traditions but also their own post-1989 identities and ways of representing their complicated national histories. Editors and contributors Alaniz and Kuhlman, as well as contributor Nijdam, gave highlights of their chapters on Ukrainian author Igor Baranko, Czech authors Vojtěch Mašek and Džian Baban, and German authors Susanne Buddenberg, Thomas Henseler, and Johann Ulrich respectively. Baranko’s work reimagines Ukrainian identity through a fictional recasting of Native American history; Mašek’s work satirizes both the socialist past and the post-socialist present with wit, irony, and a hint of Kafka; Buddenberg/Henseler’s work is a documentary project on stories of crossing the Berlin Wall. Stream it here.

Alaniz began the talk by introducing the origin of the collaboration, the geographical focus of the study, and the paucity of English scholarship on the comics of the region of interest to this day. To start, he emphasized the presence of the transnational approach in many of the comicists in their inquiry. “[There are] figures like Lucie Lomová of the Czech Republic who writes in both English and Czech and who works actually all over the continent doing residencies while maintaining a blog and an online diary,” said Alaniz, adding that Lomova both speaks from a place of her Czech nationality and culture and contributes to world history and literature. He also invited the audience to participate in and supersede his and his colleagues’ work, especially highlighting the necessity to include Baltic countries in future projects.

Alaniz then introduced his own chapter on the Ukrainian cartoonist Igor Baranko, author of Jihad and Shamanism. Citing Oksana Zabuzhko’s quote from Fieldwork in Ukrainian Sex, “Ukrainian choice is a choice between non-existence and an existence that kills you,” Alaniz described the Ukrainian national identity as one of precarious nature and of “always feeling itself under under threat of invasion or intervention.” Drawing on the tumultuous contemporary history of Ukraine since the Orange Revolution, he highlighted Russia’s intrusion in Ukraine’s internal affairs and contextualized the shared theme of many of the Ukrainian comicists today. Both of Baranko’s graphic novels in Alaniz’s study explore this theme through the aesthetics of magical realism and in the form of alternate realities. Borrowing Frederic Jameson’s concept of the perforated history, among a multiplicity of the work of other literary theorists, Alaniz suggested that the comics’ “juxtapositional, imagistic, and multimodal grammar is able to deal with questions of history in sometimes explicit, startling, and unique ways.” The image of the Cossacks, for example, is a Ukrainian national symbol that is evident in the work of Ukrainian comicists other than Baranko.

Nijdam spoke about her chapter on comics like Simon Schwartz’s drüben! (The Other Side of the Wall), Claire Lenkova’s Grenzgebiete (Border Zone), and Flix’s Da War Mal Was (There was Once Something There) which all offer individual histories of the German Democratic Republic.

“These three publications visualized the experience of living in East Germany through the children that resided there. They presented the state’s oppressive politics and contradictions through anecdotes about growing up in East Germany while also relating historically accurate facts about life in the GDR through footnotes,” said Nijdam, who added that two of the graphic novels launched a movement that has since evolved into a new genre of the german graphic novel, as more comics thematizing East Germany began to appear.

Lastly, Kuhlman shared her chapter on the avant-garde aesthetics of the comics of Vojtěch Mašek and identified the common thread of many of the works discussed to be translation, transnationality, and the problem of authenticity. Mašek, with a background in filmmaking, depends heavily on collage, transnational literature, and avant-garde aesthetics in his Elephants In Marienbad. Kuhlman demonstrated that the comic is in dialogue with many contemporary Czech artists like Jan Švankmajer.

During the Q&A, the host and the audience brought up questions regarding the European comics’ interaction with Japanese and North American comics, as well as the challenges of the sustainability of the comics industry in Europe. In response, speakers reflected on the heterogeneity of the comics of the new Europe depending on periods, genres, and translation accessibility.