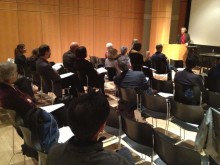 April 12 marked the opening of the two-day conference “Hegel to Russia and Back,” sponsored by the Humanities Initiative, CUNY, and the Jordan Center.

Paperno started the conference by giving an account of how Hegel’s philosophy fits into the moral philosophical aspects of Lev Tolstoy’s writing, especially to be found  in his work “What Shall We Do Then?” While pointing out that Tolstoy was extremely critical of Hegel’s philosophy and at times even caricatured it, Paperno argued that one can nevertheless see traces of Hegel’s dialectic thinking in Tolstoy. Paperno referred to Hegel’s master and slave dialectic, and how one’s meeting with the Other is essential to human life. However, while the categories of master and slave are essential to Hegel, Tolstoy moves away from this notion and instead focuses on how the encounter with the Other leads to acknowledgement of the Self, but without having to overcome the Other. The relationship between master and slave is thus dissolved in Tolstoy, but on other grounds than in Hegel’s philosophy. In Tolstoy, the Self emerges with the Other, reaching self-recognition not through domination on behalf of the Other, but through seeing one’s own place in the world clearer. In Paperno’s words, one has to become one’s own master and one’s own slave.

Love gave an interesting account of Hegel’s philosophy and (philosophical) madness, which can be defined as an instable relation between reason (intellect) and will (action). Love also argued how one can see traces of both in the works of Nikolai Fedorov. Fedorov is perhaps most known for his program on resurrecting the dead, which he thought would make it possible for the world to overcome all injustice and to finally live in peace and freedom with each other. The link to madness should not be interpreted as something negative. Instead, Love suggested that madness is at the core of all philosophy, and that there is an element of madness involved every time something new is created. This leads us to the notion of the divine, and its connection to Hegel’s Absolute. In these terms, madness also becomes freedom, which is perhaps most evident in Fedorov’s philosophy. Linking Fedorov to Hegel invokes an interesting thought process as one is tempted to question our perceptions of what is rational and what is not. At the same time, Fedorov’s ideas reject Hegel’s notion of the end of history, and are instead presented with a possible reversal and elimination of history as a whole. However, as Love pointed out, philosophical madness might also lead to the realization that there will always exist an uncrossable gulf between reason and will. This gulf may indeed lead to madness as divine creation, or instead to diabolic destruction.

Katerina Clark’s presentation dealt with the metaphor of the falling stone, and how this can offer a possible link between the works of Hegel and those of Viktor Shklovsky. Using Shklovsky’s The Sentimental Journey as an example, Clark argued for what she suggests can be interpreted as a Hegelian influence. The metaphor of the falling stone which can be found in Hegel, points to the broader questions of contingency and necessity, consciousness, free will, or the lack of such. In Shklovsky, the trope becomes a symbol of his own experiences in a country in the midst of a revolution, where he is not himself in charge of stopping the process of falling. However, Clark pointed out that one should not see the trope of the falling stone in Shklovsky as entirely negative. Through close readings, Clark argued that the process of falling can relate to the process of writing. The nature of the fall might be contingent, but how you fall can still be altered. Making art thus becomes a possible way of controlling the fall, although the fall itself does not have to be given meaning. Thus, a writer is capable of creating a conscious form around something which in its own nature is contingent. Although one cannot prove that there is a direct link between Hegel and Shklovsky, Clark’s presentation nevertheless touched upon the potential and difficulties involved in reading one philosopher’s work in relation to another thinker. It might be fruitful, but it might also lead to reading tropes or metaphors in a specific way, when in fact they may differ.

Victoria Frede gave an interesting account on Hegel’s initial reception in Russia, with Nikolai Stankevich being the very first to write about him in length. Frede argued that Stankevich and other Westernizers, including Mikhail Bakunin, in the beginning aligned with what we later have come to know as Right Hegelianism, because of the group’s reconciliation with religion. The Russian knowledge of Hegel grew after his death in 1831, and made him accessible in a completely new manner. However, it was not until 1836 that a more substantial article on Hegel appeared in Russia, translated by Stankevich. But as Frede pointed out, this translation and the ones to follow by other translators are both oversimplified and misleading. Nevertheless, they all seem to emphasize what the Russian Westernizers considered the religious aspects of Hegel’s philosophy.

Vadim Shkolnikov focused on Belinsky and his interpretation of Hegel, and how this indirectly affected the future of Russian literature. Although it has become commonplace to view Belinsky’s dealings with Hegel as misunderstood, Shkolnikov still argued that Hegel became a link between the young Belinsky and his later views on the important role of literature in society. Hegel can therefore be seen as the indirect force behind Belinsky’s personal bildung. Reading Hegel was an extremely formative experience for Belinsky and a handful of his contemporaries, and Hegel’s historical dialectics became a way of interpreting not only one’s own development, but also that of the state, culture, and society in general. An important character in Belinsky’s literary bildung is found in Pushkin, and Shkolnikov argues that Pushkin was for Belinsky what the Absolute was for Hegel. Thus, it is through literature that Belinsky came to understand Hegel’s notion of the universal.

Belinsky was also the starting point of Ilya Kliger’s presentation, although different in nature from Shkolnikov’s approach. Kliger looked at Belinsky’s interpretation of Hegel side by side with his own reading of two important Russian novels: Goncharov’s An Ordinary Story and Herzen’s Who Is to Blame? According to Kliger, Belinsky’s reading of Hegel focuses strongly on the affinity between the state and the bonds of kinship found in the family as institution. However, Kliger also pointed to the fact that Hegel acknowledges that the modern man can break free from such institutions, and instead seek out a path on his own in civil society. In Belinsky, on the other hand, the role of civil society is almost completely neglected. By investigating how this notion can be recognized in the novels mentioned, Kliger suggested that civil society as alternative to the institutions of state and family is perhaps not as prominent in early Russian realism, as it is in the realism of, for instance, Balzac.

Day one of the conference was brilliantly diverse as it included a great variety of disciplines, and traced the Hegelian influence on Russian intellectual life from its very beginning in the 1830s to the Soviet era. During the discussions which followed each of the two panels, it became clear how complicated it can be to speak about only one Hegel. As the declamations showed, it is challenging to capture Hegelian philosophy as a consistent entity, as it changes in its encounter not only with Russia as a whole, but with each individual thinker. Nevertheless, day one as a whole clearly showed how important it is to trace origins in order to see Russian history and literature in a bigger perspective. At the same time, it is evident that Hegel’s philosophy should not be ignored as an analytic tool in interpreting both history and literature.