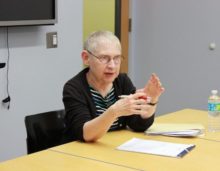 On October 28, 2016, the Jordan Center for the Advanced Study of Russia at NYU welcomed Diana Greene, a Slavic Studies librarian at NYU, for a colloquium on “Nineteenth-Century Russian Women’s Novels: Questions, Thoughts, and Speculations.” Greene, who presented a draft of the introduction to her forthcoming book on the same topic, was introduced by Ilya Kliger, Associate Professor of Russian and Slavic Studies at NYU.

Greene, a Russian literary scholar, said that her project began with a question: Why are there no canonical 19th-century Russian women novelists? This inquiry gave rise to several others: Why focus on the novel in particular? Are there, in fact, Russian women novelists, now forgotten, who are good and are worth reevaluating or recovering? What does it mean to say a novelist or novel is good? Do interpretive strategies exist that would make 19th-century Russian women’s novels legible and readable to 21st-century readers? What is a novel? Is there a woman’s novel? A man’s novel? A Russian novel? “It has become clear that in order to answer my original question, I must address all these other questions as well,” Greene said.

Greene’s previous book, Reinventing Romantic Poetry: Russian Women Poets Of The Mid-Nineteenth Century, contended that Russian women romantic poets had to reinvent male-defined poetic conventions, genres and themes in order to write their poetry. “It occurred to me that perhaps Russian women novelists […] likewise may have had to reformulate male-defined novelistic conventions in order to write their novels—that their novels may have been dismissed by the literary establishment not because they weren’t good, but because they were different,” she said.

Greene said that she narrowed the frame of her book to literature published between 1830 and 1880, but had yet to decide which authors and novels to write about. In her preliminary research, she found over 60 Russian women novelists who published during this time. Greene said that she is thinking of focusing on four novelists who encapsulate the five-decade period. She will also take an interdisciplinary approach to analyzing the literature.

Another strategy is to read Russian women’s novels against a shared women’s literary tradition. Despite the fact that several literary historians believe there is no tradition for Russian women writers, Greene said that these novelists had their own particular relationship to literary movements, which distinguishes their novels from those written by Russian men. “Women’s realism,” for instance, insists on the importance of women’s communities and the communication among female characters regardless of age, social class, physical attractiveness and marital status—“characters who told their own stories,” Greene said. She added that there was “speculation that men lacked the experience to decode women authors’ symbolic systems.”

Fundamentally, Greene’s project will use gender as a category of analysis and as a basis for signifying relationships of power. Women’s writing has often been simplified to a “marriage plot,” but whereas men’s literature commonly tells stories of adventure, enterprise and conquest, women attempted to make sense of their surrounding world, Greene explained. A few trends also populate women’s novels, like double address and double voicing, which potentially connects to the idea of women as a “muted group” in male-dominated society. “Every woman has written for men,” Greene said, speculating that double voicing might function similarly to W.E.B. Du Bois’ concept of double consciousness for the African American community in the United States.

Greene also stressed that she wants to apply her book to broader contexts to better understand what place 19th-century Russian women’s literature inhabited in literary history. “Most of all,” she said, “I’m interested in what it means to say a novel is ‘good’ and in opening my mind and perhaps readers’ minds to new and different kinds of ‘good’ in these novels.”

In the Q&A session that followed, audience members asked Greene how she would address genre and the societal limitations of female writers in her ongoing project. NYU Russian and Slavic Studies Department Chair Anne Lounsbery questioned whether Greene would only study novels that authors had themselves labeled as roman. Nikolai Gogol, she added, never called Dead Souls a novel, but it is nevertheless incorporated into the Russian literary canon. Said Greene, “I think authors get to say what they’re doing to define what they’ve done. To label someone’s work in a different genre isn’t fair.” Kliger pushed back, mentioning that ironic misnomination is common in the literary field—“Authors often do not want to be clear about what they’re doing, they want to be playful,” he said.

Some members of the audience advised Greene to consider the reception and the publication process of women’s novels. “The status of the author is being negotiated most visibly in the preface and paratextual platforms,” said Assistant Professor of Russian and Slavic Studies Rossen Djagalov, adding that in 19th-century American women’s literature, it was a common practice for a male writer to preface the book, explaining that the author was, in fact, a woman, but a literate one.

Susan Smith-Peter also wondered how Greene’s research could be tied to a larger political or historical context. “All these women are writing about regions—they’re not writing about the center,” she said. “Maybe autocracy especially disadvantages women because women have a particular place—regionalism—within a system that is centralized.” One member of the audience suggested that there might be a connection between the intensely centralized nature of the Russian state and the intensely centralized nature of the Russian literary canon. While many women’s and men’s novels are justifiably forgotten, Greene said she thinks it will be necessary to look not just at the canon, but at canonical aesthetics. “I also need to consider alternative ways that a literary work could be ‘good,’” she said. “My hope is that people will rediscover these novels and want to read them.”