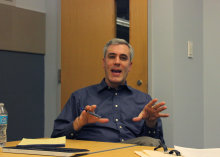 During his introduction, Yanni Kotsonis, Director of the Jordan Center, described Rogers as “the model of an anthropologist that everybody else can read and understand,” praising him for his multidisciplinary approach. The results of Rogers’ research are due for publication in the near future.

Before providing an overview of the findings of his field work in the Russian region of Perm, Urals, Rogers provided some historical context. Pointing out how oil was discovered in the region in 1929, he proceeded to discuss its role from an anthropological point of view, looking at how cultural, economic, social and political aspects interacted on a local level. “Permian oil was the world first fully socialist oil,” Rogers said. While the the discovery marked the beginning of the development of the industry in the area and “was quickly casted as crucial to the Soviet project,” Rogers discards the assumption that oil was central to the life of the city and region. “Oil did in fact play a comparatively insignificant role,” he said.

Among the reasons for this, he highlighted the fact that the industry had to compete with other sectors within the region. Drawing on Katherine Verdery’s definition of allocative power – the maximization of the capacity to redistribute – as the central drive of socialist political and economic organization, he observed how the specific dynamics regulating the economy within the region led to a concentration of allocative power in the heavy industry rather than in the energy sector.

The oil extracted in the Perm Region in Soviet times, moreover, was exported abroad, meaning that the obtained money went to Soviet central coffers and was thus not returned to the region. “They did not return directly to regional production associations, such as Permneft (the local association),” he said. “Money never flowed back to the companies,” which prevented the manifestation of an economic boom like it has been the case in capitalist societies.

Permneft, moreover, was not in charge of refining oil, which further depleted the association of its relevance. “There is not much you can do with oil, until it’s refined,” Rogers said. As the separation between oil production and refining was institutionalized, it became clear that refining industries were more much important to power dynamics than oil extraction, as they could turn crude oil into products useful to the agricultural, industrial and military structures.

However, the oil and energy sector as a whole remained largely less significant than other industries. “Of the ten telephones on the desk of the head of the regional executive committee of the party in the late Soviet period, not a single one connected him to an oil enterprise,” Rogers pointed out. Even from a symbolic and social point of view, oil was ignored in favor of images of steel and iron as emblems of power.

Moving on to the post-socialist period, Rogers focused on the influence of the Soviet legacy and importance of the period between the collapse of the Soviet Union and the privatization of the oil fields in 1993. Opening up to international markets, oil refineries were for the first time able to exchange their products independently. Quickly oil came to undergird the means of exchange in the post-Soviet period, often relying on barter. Refinery Permneftorgsintez (PNOS), for example, was known to exchange oil for products such as Chinese down jackets. The products would then be sold by PNOS workers for “crazy money” in the local market.

Rogers highlighted how the population was aware that the goods that entered the region were the result of bartered oil. “PNOS became ever more central to regional exchange,” he said. As ongoing shortages of food and fuel plagued the country, “petrobarter operations basically kept the rural areas of the Perm region from starving in the early 1990s.” A positive identification between the region and its oil developed in those days, in contrast with the tendency to view money and the ruble as an immaterial and unreliable entity.

After 1993, the oil production association Permneft was placed in the hands of Lukoil. Shortly after, Russia started sinking into its non-payment crisis, which led to delays in salary payments. As debts and tax arrears started piling up, veksels (promissory notes that entitled the bearer to a specified quantity of goods or money) became more and more common. Veksels acted as surrogate currency for paying down debts. In the Perm region, fuel veksels backed by and redeemable for a quantity of oil products issued by Lukoil were among the most popular. Rogers quoted a former state official who said that veksels turned out to be “a terrific program for reducing collective debt.” In the meantime, it allowed Lukoil to place itself at the center of the Perm region “not in production, yet, but in the sphere of circulation.”

By the late 1990s and early 2000s, as oil prices rose, money became for the first time ever closely associated with the region’s oil production. According to Rogers, under those circumstances, connections between senses of regional identity and the materiality of the oil complex did not disappear, but shifted from the sphere of circulation to what came to be known as Lukoil’s corporate social responsibility projects.

By the early 2000 the executives who had run the oil structures in the early 1990s, alongside their collaborators within the state apparatus, had successfully inserted themselves into global Lukoil. “They were in the process of becoming fantastically wealthy,” Rogers said. These individuals, however, were exposed to criticisms from all sides on various levels, including the resurgent state apparatus under the leadership of Russian president Vladimir Putin demanding that the companies invest more at home.

In response to the critiques, in 2001 Lukoil opened a new division, called Connections with Society. The division had the task of reinventing the relationship between the company and society, looking for new models for corporate relations with the population. The result was a series of  “corporate social and cultural project competitions, in which state and non-state agencies, from libraries to school to churches […] could apply for funding to run events and projects.” The company put significant funds behind this initiative, to the extent that they soon exceeded state expenditures in the field of culture. Rogers highlighted how oil played an essential role in the project on multiple levels. In particular, only organizations in oil production districts were able to apply, meaning that the link within oil and society meant an increased access to opportunities – even from a geographical point of view.

Subsequently, Rogers moved on to discuss the ways in which the materiality of oil helped drive reconceptualization of the history and culture of the Perm region through corporate funding. In particular, the majority of the funding was regularly awarded to the “Culture and Spirituality” category. Much of the money was spent on artisanal handcrafts, a decision linked to the high levels of unemployment in the region. In this sense, Lukoil advertised itself as a company working to close the gap between oil workers and everyone else within the region’s rural districts.

Rogers drew a parallel between the depths of oil and the depths of culture, noting how the funds became the primary vector for the cultural revival in the region, with Lukoil Perm becoming the “face of traditional culture” in the region. “Lukoil Perm was becoming the chief regional specialist in the geological, historical and cultural depths of the region,” he said. Moreover, the company embraced the comparison with the Stroganov family, one of the most influential noble families of the imperial period, known for its philanthropic activities.

As he proceeded to answer questions from the audience, Rogers highlighted how the level of critique coming from the federal and regional state apparatuses was particularly significant in motivating Lukoil to focus on corporate responsibility projects. Answering a question by Leonid Peisakhin, Assistant Professor of Politics at NYU, regarding the importance of context, Rogers pointed out how Perm is not representative of Russia as a whole. In the Soviet period, for example, the role of the neftianik (oil worker) in the region was not seen as a prestigious position, although it might have been in other regions where there was no other industry around, such as Siberia. Moreover, Lukoil has continued to have to compete with other economic players, meaning that the oil industry remains less significant than in other areas.

In response to another question, Rogers discussed the importance of diversity between the north and the south of the Perm region, and how the difference between the two influenced Lukoil’s strategy for corporate responsibility. Muslim influences, both Tatar and Bashkir, in the south of the Perm region meant that Lukoil aimed at focusing on national distinctiveness and tolerance, positioning itself as helping to create and support a family of nations.