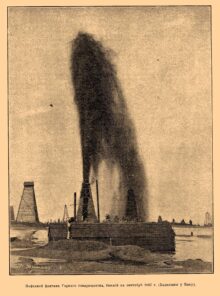 With fossil fuel use at the root of climate change, it’s no surprise scholars are taking a closer look at energy in unconventional places—literature and the arts. Much like digital humanities, energy humanities has emerged as a discipline that reflects a growing interest in interdisciplinary approaches to new technologies and modern problems. At NYU’s Jordan Center for the Advanced Study of Russia, a group of scholars drawn to the myriad ways energy is chronicled in the humanities gathered on October 25, 2019 to exchange and develop ideas. The conference, titled “Energy Aesthetics: Force, Flow, and En-tropy in Russian Culture,” was co-organized by Maya Vinokour, Assistant Professor at NYU’s Department of Russian and Slavic Studies and Jillian Porter, who is Director of Russian Graduate Studies at the University of Colorado, Boulder.

“We don’t know what anyone’s planning to do about climate change. If there’s a solution, we don’t know what it looks like, or who will be responsible for moving it forward. That’s part of what makes this field interesting and exciting,” said Professor Vinokour. “Choices that the world’s economically dominant nations have made since the extraction of large quantities of oil began have had a direct impact on climate change. Anyone who can shed light on that historical trajectory is doing something relevant to environmental humanities,” she added.

Literature, visual arts, popular science brought together Russian scholars in fields ranging from visual arts to literature to anthropology. The aim of the interdisciplinary symposium was to examine “energy as a shaping force in Russian literature, visual culture, and social practice from the mid-nineteenth cen-tury to the present.” Jillian Porter presented a paper entitled “Make It Work: Narrative Energy in Anna Karenina” which aims to show how thermodynamics, on the cutting edge of physics in the 1850s, shaped the text. “Given that Anna Karenina and many other 19th-century novels were shaped by contemporary scientific understandings of energy, ‘narrative energy’ may be a particularly useful term for thinking about how these novels work,” Porter said.

Another classic Russian text, Chernyshevsky’s What Is To Be Done?, was the subject of a paper by Konstantine Klioutchkine, Associate Professor or Russian at Pomona College. His paper examines the role of women as “energizers” of social progress, and as producers and consum-ers in the developing culture of print capitalism. “What Is To Be Done? is the most important text for the Russian In-telligentsia in the late 19th and early 20th centuries, used a blueprint for both everyday life and as a scientific metaphor as to how progress might work,” Klioutchkine said. Vinokour also examined ways pre-1917 literature became laboratories of future societal organization in a paper about the emergence of the Stalinist conjuncture of liquidity, futuristic utopianism and personal responsibility. Nikolai Fedorov (1829-1903) took the technological innovations in physics and photography of the day a step further, employing new forms of energy for a utopian project to bring back the dead. Colgate Universi-ty’s Mieka Erley argued that Fedorov should be considered a “theorist of photography” in her paper, “Radiant Images: Nikolai Fedorov’s Apparatus of Resurrection.”

Coal miners and early oil spills
Other academic works considered artistic representations of energy and modern technologies.
Jane Costlow of Bates College researched visual representation of the Volga, such as Isaac Levitan’s Fresh Wind and Ivan Aivazovsky’s Volga near Zhigulev Hills. “By the late 19th century both commercial fishermen and biologists were increasingly concerned about oil spills in the Volga… My interest in this paper is in exploring what it might mean to ‘see’ oil in the period.” Molly Brunson of Yale University developed a paper for the confer-ence on depictions of coalminers—often in darkened spaces with coal-blackened faces—in the Donbass by artists Nikolai Kasatkin and Ale-ksandr Deineka.  “It was an invitation to think abut these images through a different theoretical lens… I took it as an opportunity to think about something old in a new way,” Brunson said.  Anindita Banerjee of Cornell University presented a paper, “Red Allah’s Oil: Arts of the Revolution and the Energy of the Colo-nized,” in which she researched archives of writers, artists and filmmakers from the 1920 congress in Baku, an oil production center. This includes poet Velimir Khlebnikov’s verses written in the “Land of Fire.” William Nickell of the University of Chicago researched the unique success of Soviet-era mental hygiene which was a collective approach, ra-ther than an individual one, in his paper “On Social Condensers and Men-tal Health.” Isabel Lane, through Boston College, discussed the post-nuclear landscapes, including Rachel Carson’s Silent Spring, Chernobyl Prayer by Svetlana Alexievich and Stalker directed by Andrei Tarkovsky. Alec Brookes, from Memorial University of Newfoundland, presented research on visualizing powerlines in the post-Soviet north, drawing on paintings and film, including Andrei Zviaginstev’s Leviathan (2014). Anya Bern-stein, of Harvard University, presented findings on current religious and secular trends in post-Soviet Russia, including on cryonics in a paper called “The Future of Immortality: Remaking Life and Death Contempo-rary Russia.”

Energy questions still central
Anson Rabinbach, a conference attendee and a Germanist, said some of the information was new to him as a non-Russianist.
Themes from the conference connected directly to his book, The Human Motor, about the popularization of thermodynamics in many fields, including the science of work. “It means there’s a new approach to nature. Nature is unified around the concept of energy. Nature is productive, which means it transfers one kind of energy, heat or sunlight, into different kinds of work.” “The lessons that people drew from this is that the greatest sin is the wasting of energy. Healthy society is characterized by the conservation of energy and the increased productivity of labor,” Rabinbach said.

These same questions about energy remain relevant today. “One of the themes is what are the safest methods of conservation of energy? For example, is nuclear power superior to wind and solar pow-er? Is it positive to sacrifice the potential for danger for higher levels of productivity? I think it’s not.” “We don’t know what the jobs of the future will look like—who knows who the crucial actor for pushing policy forward will be? It may have to do with the representation of the issue—that won’t necessarily be done by a petroleum engineer. It will be done by someone able to package that in a compelling way.”