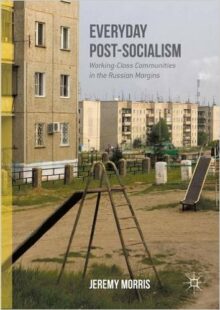 On February 21, 2020, the Jordan Center hosted Jeremy Morris, Associate Professor of Global Studies at Aarhus University, Denmark for a talk about ethnographic research he carried out in ‘small-town’ Russia and beyond since 2009. Professor Morris’ research spans the topics of social trust, the welfare state, the informal economy, class, precarity, and postsocialism more generally. The talk, held as part of the Occasional Series, was introduced by Bruce Grant, Professor of Anthropology at New York University.

In the first part of the talk, Professor Morris reviewed the main ideas in his book Everyday Postsocialism (Palgrave, 2016), which argues that even in regions buffeted by deindustrialisation, loss, and precarity, ordinary people do more than just “get by.” Instead, they actively make their environment habitable, both economically and socially. An enduring irony of life in small-town Russia, according to Morris, is that the structural causes of its fragility and decline – dependent on a single-Soviet-era company – are also the cause for its resilience. Morris referred to this phenomenon as “compressed social geography,” which emerges from the overwhelmingly blue-collar nature of this town that sustains solidarities, networks and moral values inherited from the socialist period. At the same time, these networks help inhabitants negotiate ‘new’ modes like the informal economy, new forms of labour migration, and locally-relocated multinational companies.

Everyday Postsocialism is also a close-up examination of the ‘losers’ of postsocialist transition and how they come to terms with that status – a status that remains even 30 years after the collapse. The book’s protagonists include some of the most visible losers of the transition, such as the inhabitants of Izluchino, a former mono-industrial town in the Kaluga region. While they were relatively well off during the Soviet period, these blue-collar employers of former Soviet enterprises have unsurprisingly struggled to cope with the tumultuous transformations of the last thirty years. Izluchino was a typical small monotown, rapidly growing in the 1950s and 60s as a spoke in the wheel of the larger Soviet military industrial complex. Close to the experimental nuclear reactor of Obninsk, it was ideally located to provide construction aggregate products – sand, gravel, clay, and lime.

To contextualize the working-class self-image transition “losers,” Morris presented two powerful ideas that are associated with the nostalgia for the security blue-collar work provided in the USSR: the paternalistic state and the social wage. The former can be understood as enterprise paternalism, and the latter refers to the sum of non-cash benefits associated with employment that are still positively perceived: good canteens, subsidised shops, kindergartens, and housing. From here, Morris links the objective class positioning of blue-collar workers during the Soviet era to today’s subjective sense of loss.

While existing media and scholarly coverage of former monotowns like Izluchino often focus on the ill-fated model of Soviet urban planning, Morris offers a new conceptual framework to analyze everyday life in these towns, which focuses on attempts by their citizens to reach ordinary agency. The word ‘habitability’ becomes useful: on the one hand, it was “an approximation of things that people kept repeating about how they made do with meagre resources,” while also habitability was about “how citizens reflected positively about their work, lives, and immediate environment.” For example, a woman Morris spoke with who worked at a nearly bankrupt factory referred to her experience as “we’re stewing in our own juices’.” This juice, she would add, “is both bitter and sweet – you can, after all, live on compote it has vitamins in it.” According to Morris, the citizens “talked a lot about the bitter-sweet feelings of continuing to work in declining local factories even as collectives and solidarities remained viable while the economics did not.” Local solidarities also originate in the reliability of the social environment – a ‘meta-occupational community’, as Morris calls it. People were able to reliably call on social resources from the former Soviet factory era, even though that era had come to an end.

In the second part of the talk, Morris focused on recent developments that will  feature in a new book project, which will be more diverse in terms of class-coverage and will also look at spatial diversity. Like Everyday Postsocialism, the new project aims to take a sober critical look at the idea that Russians felt a lasting sense of improvement due to the economic growth of the early 2000s, for which they thank Putin. Morris introduces a particular kind of ‘everyday’ resistance, as well as more fundamental questions about political economy: the particular nature of economic and social dispossession, the coherence or incoherence of the state, and some quite specific questions about autonomy in work and alternatives to wage labour.  Citing Wendy Larner’s (2000) theory of governmentality — the interpellation of individual workers as self-regulating subjects, Morris compares the post-Soviet industrial environment in Russia to patterns of post-Fordist maximization of human capital in the US and elsewhere. “What makes the Russian post-Soviet industrial environment so interesting for the study of governmentality is that change comes abruptly, and in varying degrees of coercion,” Morris said.  While  Fordism didn’t exist in the USSR, Morris argued that the individualization of work in present-day Russia  is imposed against long-standing expectations of “enterprise paternalism, arms-length monitoring, and creativity and autonomy in problem solving and task management in production itself.” According to Morris,  this phenomenon has been a major theme in labor sociology and economics – from Sergei Alasheev in the 1990s, to the work of Alexander Temnitsky and Alexander Prokhorov today.

But moving beyond governmentality theory, which is predicated on the recuperation of resistance, Morris deems resistance as possible and creative precisely in such places as backwater monotowns, where workplaces and labour itself serve as “the starkest and most dramatic illustrations” of the neoliberal paradigm shift. Morris tells the story of a composite ethnographic character called Sasha: a job-hopping worker, who tries and quickly fails to make the grade as a “suitably reflexive neoliberal subject.” Formerly a first-class skilled worker who encountered unjust demands as the industry privatized, Sasha then quit, claiming it was worse than an informal economy job: “Those who know how to work know many other things besides and so won’t lose out. […] They get a satisfaction from it—that they did it themselves. I suppose it’s a kind of inner happiness [dushevnyi pod’’em]. […] This is where I’m comfortable, my habitat [sreda obitaniia], and I this is where I will stay,” the subject said. It is in his resistant talk about quitting that he imagines everyday life as the search for habitability. According to Morris, this is consistent with and even more evident among female workers, who are able to build quite robust networks of mutual aid and reciprocity.

To conclude, Morris turned to what he calls “everyday political economy,” which pertains to long-term postsocialist social suffering, platforms for local protests under authoritarian regimes, and governmentality in “incoherent states.” Highlighting Russia’s “incoherent states,” Morris suggested the variety of hybrid governmentalized selves. Drawing again on the story of Sasha the informant, Morris asserted that Sasha’s moral personhood was inflected by the past legacies of labour relations, ideology and also his encounter with the new Russian capitalism. Most importantly this moral reasoning was both intellectual and embodied. “As Simon Charlesworth nicely puts it, ‘absurd inhabitation’ was written on his body. And both resistance and suffering were phenomenological, pre-conscious things,” said Morris.