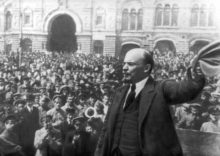 On Wednesday November 8, the Jordan Center hosted a Roundtable Discussion on “What Was 1917?” in commemoration of the 100-year anniversary of the 1917 Revolution. The panel featured Anne Lounsbery, Professor and Chair of Russian and Slavic Studies at NYU; Anne O’Donnell, Assistant Professor of History and Russian and Slavic Studies at NYU; and Joshua Tucker, Director of the Jordan Center and Professor of Politics at NYU. This was the third event in the “100 Year Anniversary of the 1917 Revolution” lecture series, co-sponsored by the NYU Department of History.

The Russian Revolution of 1917 is viewed today as a significant event, not only in a historical sense, but also from a scholarly perspective. This radical event left a lasting legacy. The panelists thus offered three different disciplinary frameworks for considering the Revolution, analyzing the event within the fields of history, political science and culture.

Professor Anne O’Donnell opened the discussion with a historical analysis of the Revolution. Before 1905, Russia was an agrarian society, governed by autocracy and composed of a population of subjects. Even in this primitive state, however, Russia conceived of itself “as a global power in the making” and ultimately “this perspective unleashed a framework for reform toward modernity.” In the years leading up to the 1905 Revolution, Nicholas II believed he needed to institute reforms, but without encouraging political power within society. The October Manifesto did, however, grant civil rights, which led to the development of a range of political parties: the Kadets, the Socialist Revolutionaries, the Bolsheviks and the Mensheviks. In the midst of these developments, the legitimacy of the monarch was diminishing and peasants were gradually mobilizing. In February 1917, Russia found itself fighting in World War I while facing internal turmoil. Bread riots spread through Petrograd, peasants stormed Nevsky Prospekt, and Petrograd militants killed civilians. The city was in revolt. Meanwhile, a new provisional government attempted to to establish national rule, forcing the tsar to abdicate in the process. Finally, on October 25, the Bolsheviks took over, ending the war with Germany and eliminating private property. The Revolution and its aftermath begs several questions: Was the system built by the Bolsheviks a planned economy or a single-party dictatorship? Moreover, was this socialism or was this a “distortion” of what socialism was supposed to be and if so, who was at fault? Even if the answers are unclear, a common perspective 100 years later is that ultimately, “the Russian Revolution mattered [as] a defining event of the 20th century.”

Professor Joshua Tucker continued the panel with a political science perspective. As a professor of Comparative Politics, Tucker considered the impact that socialism has had on contemporary political contexts. As Tucker noted, “Marxism [is] a gigantic paradigm in the field” and is re-emerging in far-left circles today. He presented the question, Without the events of 1917, how central would any of these Marxist ideas be? First, the development of international relations, particularly the escalation of the Cold War, is a direct result of the Revolution. During this period, the world came to be understood as largely “bipolar”, as two rival ideologies, socialism and capitalism, fought for domination. Such concepts as “mutually-assured destruction”, “deterrence”, “balance of power”, and “proxy wars” emerged from this conflict and still function as central aspects of international relations today. Second, our modern-day understanding of the concept of “revolution”, a central topic in the field of comparative politics, is strongly rooted in the events of 1917. Indeed, the Russian Revolution is one of four key revolutions — along with the US, French, and Chinese revolution — that inform how we think about even the general idea of revolution today.  But not only did 1917 play such an important role in the study of revolution, 1917 also led directly to 1989, which has played such a crucial role in how we think about democratization (or the lack thereof) in the aftermath of the collapse of communism. Tucker then proceeded to consider the aftermath of communism, particularly how people’s attitudes and behaviors changed after the collapse of the USSR. According to studies that he lays out in his co-authored (with Grigore Pop-Eleches) book, Communism’s Shadow: Historical Legacies and Contemporary Political Attitudes, people living in post-communist countries demonstrate less support for democracy, less support for markets,  and more support for the state provided social welfare. Employing large-scale cross-national survey analysis, the authors find that these “Soviet legacy” attitudes are most likely a result of “living through communism”, as opposed to simply “living in a post-communist country”.

Professor Anne Lounsbery presented the final part of the panel with a focus on cultural developments of the Revolution. Lounsbery suggested that art is a context in which the Bolsheviks had won. She presented several examples of art that emerged shortly after the Revolution, emphasizing the fact that such visual iconography was “radically modern” both then and today. The “ideological legacy” of this period had lasting effects. What made this art so enduring? This radical new aesthetic genre communicated the conviction that art can change the world. In addition to the genre, a new alphabet and a new calendar were devised within several years of the Revolution, thereby reshaping space, time and language and “chang[ing] people’s worldview” in the process. Lounsbery also discussed the Bolsheviks’ efforts to mythologize history. In 1920, for example, the State staged a reenactment of the 1917 storming of the Winter Palace. This reenactment was made to be a major performance and significantly more dramatic than the actual event. Thus, the Bolsheviks succeeded in “mythologizing themselves and their own actions” and thereby creating a new world. As Lounsbery noted, this “conflation of art and life” was a major factor in establishing such a powerful legacy.