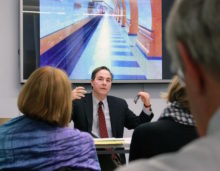 On February 17th, 2017, the Jordan Center for the Advanced Study of Russia at NYU welcomed James T. Andrews for a lecture entitled, Narrating the Soviet Metropolis: Visual Culture, Underground Architectural Space, and the Moscow Metro. Andrews, a professor of modern Russian and comparative Eurasian history at Iowa State University, was introduced by Anne O’Donnell, Assistant Professor of History and Russian and Slavic Studies at NYU.

Andrews began by sharing historical background on the Moscow metro, based on his research at the Moscow Museum archives and the Moscow Communist Party photography archive. When the subway was first proposed in 1902 to the Moscow Duma, the idea was rejected “as an abruptly conceived project and an encroachment on everything Russian people hold dear in the city of Moscow,” Andrews said, quoting a newspaper editorial from Russkaya slova. Both the steep cost of the project and its potential dislocation of city dwellers were main concerns. In fact, the subway system was not jumpstarted until the early 1930s, after the population of Moscow had surged from just over a million in 1920 to 3.6 million in the mid-1930s—a result of industrialization and urbanization under Stalin.

The metro served two purposes, one practical and one symbolic. While it worked to dissipate street traffic, it was also “a visual, architectural showcase for socialism,” Andrews said, pointing to a 1932 advertising campaign that claimed “there are no fortresses, which the Bolsheviks cannot overcome.” As the metro was constructed, photographs of new subway stations emblazoned the front pages of Pravda, applauding the great engineering feats of Soviet architecture. Using the British method of deep shaft tunneling, the stations were constructed far enough below street level that they could also be employed as bomb shelters. With help of the German company Siemens and British advisors, the city built escalators to transport passengers deep into the ground. However, the government later arrested British engineers for espionage. “They had too much intimate knowledge of the city map,” Andrews said. “After that time, all labor, art and architecture was from Soviet laborers, artists and architects.”

The metro also held a variety of social functions. While still largely in construction, stations were transformed into hospitals, clinics and schools during the Second World War. Stalin gave a number of speeches inside the metro and some babies were even born underground, including one architectural archivist whom Andrews encountered in his research.

Andrews next outlined some theoretical frameworks to help understand the narrative of the Moscow metro in the Russian context. He mentioned the French psychologist Pierre Janet, for example, who “thought of city dwellers as creating a diverse sense of humanity and mass mobility through narration. As they move through the city, they narrate their lives,” Andrews explained. He also spoke about the work of cultural theorist W. J. T. Mitchell, who developed a time-specific iconology that saw artistic spaces as speaking to the public at different generations by telling different stories. Building on these ideas, Andrews asked the audience to “[t]hink about the Moscow metro as creating spatial trajectories.”

Andrews next categorized four phases of the Moscow metro system, spanning from the late 1930s to the present moment: the early modernism and revolutionary thematics, which spanned from the 1930s to World War II; “baroque late Stalinism,” which used greater Russian national thematics from the late war era until the death of Stalin; the “period of vacuous utility” in the Khrushchev era; and finally, the Russian national thematics from perestroika to the present day. “Imagine the metro as […] preserving these architectural layers,” Andrews added, before expanding on the specifics of the four stages.

Speaking about the first modernist phase, Andrews mentioned the architect Alexey Dushkin, who, in his correspondences about metro construction, frequently returned to the topic of light and ventilation. Many of his designs, including the Revolutionary Square station built in 1948 “have large vaulted ceilings and cast large light down onto the platform,” Andrews noted. Dushkin, he added, read avidly about the psychology of fear, assuming that passengers would be afraid to go down into the depths of the subway. But with these vaulted ceilings that were bright and felt open, people “wouldn’t feel so confined […] when [they] were waiting for trains,” Andrews said.

Toward the end of the war and in the postwar period, metro architecture changed dramatically. Design took on a new ornateness and grandiosity, and the walls of new stations were peppered with heroes of the past to emphasize “the triumph of empire over old revolutionary emblems,” Andrews said. For example, the artist Alexei Shchusev brought monumentalism and neoclassical forms to his metro designs, stylizing some after 17th-century Moscow churches. Other artists, like Pavel Korin, employed iconography, creating subterranean mosaics that depicted the battle victories of Alexander Nevsky, the Novgorodian Prince, as well as the end of Mongol rule.

But by 1955, Khrushchev’s edict on the liquidation of “excesses” in construction and architecture led to yet another shift in metro design. As part of his de-Stalinization campaign, Khrushchev renamed the Stalinskaya station to Semyonovskaya in 1961—“a process of erasure,” Andrews said. In general, “Moscow stations became simpler, less ornate,” he said, adding that they were “intentionally more narrow and weren’t deep shaft.” The thousands of standardized and prefabricated Khrushchevkas, built as an antidote to an expanding city and its resulting housing crisis was also reflected in the underground.

But with the beginning of perestroika in the 1980s, Russian national thematics reemerged and continue to fuel subway architecture today. For instance, in the Park Pobedy Station, built in 2003, one wall portrays the Russian Imperial Army’s victory against Napoleon, and another depicts the Soviet victory in the Second World War. Other stations pay homage to great Soviet minds, like the Mendelevskaya station, finished in 1988, and the Dostoyevskaya station, constructed in 2010. While “[Homi K.] Bhabha noted that when nations are revitalizing, national images tend to glorify myopic views, […] is this happening in Putin’s Russia?” Andrews asked. “I hesitate to say.” Still, he added, there is no question that the metro plays an integral role in Moscow life for its almost 9 million daily riders—more than the passengers of the New York and London subways combined. The subway system, still state-run, continues to grow and the city now boasts 200 stations.

Both an “archetypal socialist space [and] a technological feat, […] the plot and narrative of the stations has changed with new themes at particular generational junctures,” Andrews concluded. But while the Soviet state saw the metro as an extension of socialism, Andrews provided an amendment: building a metro, he said, “tells the story of socialism and beyond.”

In the Q&A session that followed, Andrews was able to flesh out some of the generational differences in design and usage of the Moscow metro. In response to a question by Anne O’Donnell, Andrews articulated that the relationship between generations and metro designs could be illustrated on various levels. For example, in personal terms, “people who were born at particular times think of themselves as citizens during a particular phase of metro building [and] use that as part of their collective memory,” he said. Turning to the long term historical gaze, one can also look at transformations in the metro as a reflection of how the city changed from above—how the politics of urban space influenced the underground. Beyond that, he added, is the sociological question of how contemporary Muscovites think about the metro, adding a third level to the narrative.

Susan Smith-Peter, President of NESEEES, also asked Andrews to expand on the narrative function of the Moscow metro. “The move towards an everyday socialism in some ways can be seen as a failure of imagination,” she said. “Does [this stage of metro design, i.e. in the Khrushchev era] have something to do with the decreasing importance of socialism?” she asked. Further, Sam Casper, Writer in Residence at the Jordan Center and Ph.D. candidate at the University of Pennsylvania asked how the change in names of metro stations affected the terrain of people’s experiences.