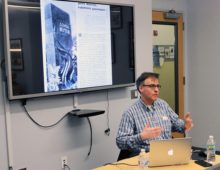 On February 24, 2016, the Jordan Center for the Advanced Study of Russia welcomed John McKay, Professor of Slavic Languages and Literatures and Film Studies and recently Chair of the Film Studies Program at Yale University, for a talk entitled, “To Dziga Vertov, Artist of the Revolution.”

McKay began his talk by placing Vertov’s understanding of Revolution, or what it means to be revolutionary or make revolutionary cinema, in context: he noted that today “one of the difficulties scholars have in conceptualizing the 1917 Revolution is increased awareness of the multi-pronged character of the revolution itself,” allowing them to talk of Revolutions. The Russian Revolution of 1917 poses “terminological issues,” McKay said, because it held multiple meanings for people based on many factors (such as where they lived or their political leanings) but also because people actually experiencing the historical period did not necessarily think of October 1917 as a “sudden opening of a radical horizon,” as we could see it retrospectively. “To be sure they knew they lived through tumultuous times,” McKay said, given millions of dead, injured and displaced, but “had the Revolution actually happened” for them? The Bolshevik government required the answer to be “an unqualified yes,” almost immediately institutionalizing the Revolution through symbols, reenactments, celebrations and holidays, and “the sense of the adjective “revolutionary” referring to ‘our revolution,’ ‘our Soviet history’ was established by 1930s,” McKay explained.

Nevertheless, McKay said, “revolution” and “revolutionary” were never temporal markers but rather “pointed to the beginnings of progress” in the Soviet Union. He singled out two main usages of “revolution.” The first, namely, the notion of revolutionizing everyday life (быт in Russian) meant a “drawn-out process of progressive change in every aspects of life, such as property relations, hygiene, education, sexuality and more.”  The other is “more punctual,” McKay said, indicated in Vertov’s phrases like “the revolutionary jump,” a reference to the transition from the previous order of “hierarchy and exploitation to another that’s characterized by working people that create value and take charge.” McKay pointed out Eisenstein’s Battleship Potemkin and Pudovkin’s Storm Over Asia among films where this “revolutionary narrative pivot” takes center stage.

There are many examples of these transitions in Vertov’s films, McKay said; “he overwhelmingly allegorizes revolutionary transition by means of visual and sonic contrast rather than through travails of protagonists.” One example is the opening sequence of Vertov’s 1927 film The 11th Year (McKay’s “favorite instance of Vertov’s habitual allegorical mode”), based on the building of the Dnieper Hydroelectric Station. In the sequence, the shots of famous natural sights such as the rocks called ‘The Bogotir,” “Love,” and “Catherine’s Armchair,” were picked for “self-reflexive reasons,” McKay said: Vertov’s cinema promised to overcome notions of nobility and sentimentality in favor of the revolution’s promises (the industrial station) and so “the cinematic and political revolution were linked.”

This sequence is followed by the image of the river surface, without any name or importance attached to it. “This “marks an odd transition,” McKay remarked, whereby “the signification of the previous sights are eliminated. This becomes a film without a genre, a film about elements, including human ones. The water is an ontological moment when you feel the raw moment of the being of the water.”

The fact that Kremlin walls still make an appearance at the end of the film is remarkable, according to McKay, because it attests to another reality: this was after all a project being operated by the Communist Party. Even though Lenin “famously despised the notion of a new revolutionary art,” McKay reminded the audience, “he still believed in the dissemination of revolutionary culture would have revolutionizing effects.” In any case, McKay said, it is important to keep in mind the institutional and ideological factors as well as Vertov’s cinematic project. “Some critics have said his stance had to do with having to maintain his place within the industry, where he had to compete for resources,” McKay noted, “but his shrillness was furthered by the desire to overturn hierarchy and also a certain pride taken in marginality.”

There are certain clues in Vertov’s writing and some of the notes he never used as to his ideological preference for non-fiction film. His “vocabulary, such as ‘press of the revolution’, ‘the need for a class bond between working people’ concerns imagined identities and agencies that were supposedly involved in all levels, production, reception and exhibition,” McKay said. To Vertov, bourgeois film is propaganda, “but it is important to remember a lot of these ideas precede Vertov,” including his ideas of fiction film as inherently bourgeois, which was expressed in Russia prior to both him and the Revolution.

Still, how do we differentiate what is specifically different in Vertov’s project as a revolutionary project, McKay asked. He offered that a major technique in Vertov’s films is “the endless shifting of perspective.” He saw this kinetic material as ‘the true ground of cinematic practice,’ and thus the only worthy focus of narrative. “Cinema to him is perceived movement and perception in movement,” McKay said, adding that “Vertov’s refusal to allow human gazes and movements to be the connective tissue of narrative cinema can be better understood in a comparative perspective,” keeping in mind that “his animus is also directed at fascination with personalities of stars.”

The rejection of a traditional mode of narrative is crucial to Vertov’s cinema. Almost all fiction films, as well as many non-fiction and experimental films “are bound in their organization by the imperative” of the narrative, McKay said. Namely, “to build and convey narrative, however transparent or ambiguous, centered on the changing perceptions and emotional travails or the psychology of protagonists within coherent space and time  is crucial to film’s institutional mode of representation and Vertov rejects it from the get go.”

On the question of whether Vertov’s revolutionary character remains legible to us today, McKay said his sense was that Vertov’s project remains of interest “as long as we remove from it its post-revolutionary character, if we subtract the progressive character from it.” To illustrate this point, McKay turned to one of Vertov’s films where “narrativization” (of communism) doesn’t happen and “the film is presented as effectively and perpetually pre-revolutionary:” One Sixth of the World (1936). Lacking “the single moment of decisive transition,” the film addresses “two fundamental topics still crucial to the political discussion of the legacies of the Russian revolution,” according to McKay: “One is the film’s representation of economic life not in productivist terms, but as the intricate interweaving of a million everyday acts, not confined to the USSR. The other motif is the constitution of the collective itself – the who is in and who is out.”

The film, Vertov’s “most elaborate production in terms of the people he had at his disposal,” contains a sequence that starts with the text (plural) YOU (ВЫ), whereby “the position of the ‘you’ is being evacuated and filled in all the same time, speaking to the question of inclusion.” Vertov’s script then addresses the (singular) “you in the taiga,” “you in the tundra,” “you in the ocean,” etc. before showing all kinds of people working and/or “being,” with what McKay called a “Noah’s ark quality,” finishing again with a (plural) “you who overturned the power of capital in October during the revolution.” “You have a direct address to various members of Soviet society and images of industrial proletariat in the end,” McKay remarked, noting that while ordinary citizens are given a momentary visual privilege, as the sequence progresses with “you sucking your mother’s breast,” “you hale and hearty hundred-year-old man,” “you mother playing with her child,” “you child playing with an arctic fox,” “you unleashing the reindeer,” “you washing clothes with your feet,” and concluding with “you sitting in this movie theater” with an image from the beginning of the sequence, it is all folded together.

“Proletarians are engulfed in the chain that places them in the same level with the people mentioned. They are all represented as the mutual owners of the Soviet land on the basis of their engagement in these unremarkable actions and by being addressed by this film,” McKay noted. As the questions of mass engagement, production and inclusion are never solved in the film, “this formal moment opens up a problematic moment for socialist politics,” McKay said, adding that this problematics is “extremely relevant today in our day of supposedly open borders and governments governing their populations on the basis of making them more precarious.” In this form, the film was indeed not acceptable to the authorities, who demanded that Vertov added a reel at the end, “which he openly chafed at.” With One Sixth of the World, “Vertov was essentially opening a different kind of thinking about revolution that was possible at the time,” McKay concluded.