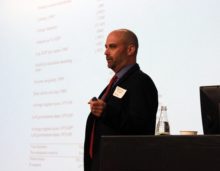 On April 1st, 2017, NYU and the Jordan Center hosted the 38th Annual Meeting of the NESEEES Conference. Professor Joshua Tucker, the Director of the Center, delivered the keynote address, where he introduced his most recent book project, Communism’s Shadow: Historical Legacies and Contemporary Political Attitudes, co-authored with Grigore Pop-Eleches and recently published by Princeton University Press.

In his introduction of the project’s background, Tucker said the authors were motivated by a desire to understand how the literature on post-communist world evolved, as well as how communism’s legacy has shaped present attitudes in the region.

“Originally,” Tucker reminded, “there was this idea that post-communist societies were a tabula rasa.” That didn’t turn out to be the case, and while scientists agreed that legacies mattered, there was no consensus on how exactly communism’s legacies shaped the way these societies experienced “the new rules,” such as constitutions, laws, electoral systems. The approach tended to be ad hoc; moreover, most studies of legacies tended to focus on institutions, rather than individual behavior.

In order to understand attitudes, in terms of whether citizens of post-communist countries have less or more support for, social welfare versus the market, for instance, “the first thing we wanted to do was demonstrate that these differences we saw in more simple analyses did indeed exist in a more rigorous framework,” Tucker said.

The authors wanted to come up with theoretical explanations that would allow them to test to what extent attitudes were legacies of Soviet communism. Then, to the extent that they were, they wanted to see which legacy effects were the most important.

The first part of Communism’s Shadow is heavy in research design, with an entire chapter on methods and data. The second part of the book is devoted to four main areas of empirical analysis — including attitudes towards democracy, markets, state provided social welfare, and gender equality — with a final chapter looking at over time effects.

Tucker said that for scholars wanting to study legacy effects, “there are good methodological reasons” to be interested in the post-communist world because of the way the regime collapsed within and outside of Russia. “There is a high degree of exogeneity in both the rise and fall of communism,” he said.

Addressing scholars “who don’t trust cross-national research in any shape or form,” because of the great number of variables that can’t be controlled for, Tucker offered the case of Germany, where “we have the added benefit of getting variation within a country in exposure to communism.”

Within the “living in a post-communist country” framework, Tucker said, possible factors that could explain why people don’t support democracy or market economies may include demographic factors (an “over-educated, under-employed” population), economic factors or political institutions, such as the effect of presidential system versus parliamentary system.

The alternative explanation that Tucker and Pop-Eleches tested is communist socialization. Noting the abundance of literature looking at why people might pick up attitudes from regimes and acknowledging that a lot of comes from advanced capitalist countries, Tucker said there was still much to adapt to the post-communist case. The “project” nature of the Soviet Union lends itself particularly strongly to socialization theory, he added.

As an example of the empirical work in the book, Tucker presented results from the chapter on support for state provided social welfare (the book also examines support for democracy, markets, and gender equality).  Their data came from World Value Surveys; 211 surveys in four waves, from 87 countries, supplemented by an aggregated-level data set “painstakingly gathered over the years.”

The take-away point from their data analysis was that no matter what they added to make away with the finding that “post-communist citizens are more supportive of social welfare,” including pre-communist conditions or economic factors, it did not work. “We replicated it in Germany and found the same pattern,” Tucker said.

There are debates within the socialization theory, Tucker explained, on whether exposure matters more when received as a child from parents or across one’s entire life span. But “nobody, previously to this book, had argued or had even presented evidence suggesting it was just an adult-level experience,” Tucker said.  And indeed that is what the authors found in the case support for democracy, markets, and social welfare: in the communist context, adult exposure seems to be more important in terms of leaving an attitudinal imprint than childhood exposure.

One big exception was gender equality, where early socialization mattered more than adult exposure, which Tucker said could be explained by the fact that “gender equality was one area where the regime walked the walk early on.” Overall, these contrary findings raise the question if there’s something different about socialization under communist regimes.

The authors’ conclusion from the chapter on social welfare was that living in a post-communist country only partially explains the excess welfare state support.

The “living in communism” argument, however, explained a great deal, according to the authors’ findings: Tucker said their findings were fairly uniform across the 1990s and 2000s, that adult exposure mattered more than childhood exposure, urban exposure more than rural, and that religion mattered, in that exposure had a lesser effect on Catholics and Muslims.
“Looking at the book as a whole,” Tucker said, the findings were even stronger in the democracy and market chapters. The results for gender equality, however, looked quite different, as there was not a post-communist surplus in support for gender equality. Tucker suggested that this could be explained by several factors, such as“rhetoric versus reality,” gender equality being less central to communism’s ideology, or being less popular among communist citizens but that these explanations required further research.