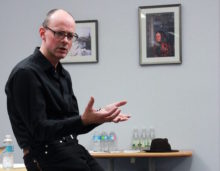 On December 2, 2016, the Jordan Center for the Advanced Study of Russia at NYU welcomed back Kevin M. F. Platt, who gave a talk titled “Lyric Cosmopolitanisms and Eccentric Orbits: Russian Culture in Riga, Latvia,” derived from his next book project. Platt, whom Rossen Djagalov, Assistant Professor of Russian and Slavic Studies at NYU, introduced as “a one-man orchestra,” had visited the Jordan Center two weeks prior accompanying the Orbita Group, an artistic collective based in Riga, Latvia. Noting the “much debated anthropological turn” that Platt has pioneered in Russia, Djagalov commended the extent to which he has involved and brought together Russian scholars and poets both in Latvia and in Russia.

Platt began his talk with an epigraph from a 2002 poem written by Artur Punte of the Orbita Group on the complexities of identities in Latvia. Since 1991, Platt explained, “discussions of ethnic identity have been potentially awkward in many places in the former Soviet Union, where history has reconfigured the relationship between language, culture and nationalities.” Latvia is one such place where these categories have become blurry.

The most recent historical reconfiguration came after the annexation of Crimea by Russia, that Vladimir Putin described as a just response to the situation brought about by the collapse of the Soviet Union, when “millions of Russians went to sleep in one country and woke up in another as national minorities.” To Platt, the concept of the “Near Abroad” is the most significant of the new categories of geography that came into being in the 1990s, a Russian term that applies to the band of former Soviet states, in which significant populations of Russians and Russian-speakers still reside. When the Soviet Union collapsed, these people “emigrated” without leaving the comfort of their own homes from had had been, for many of them, self-evidently “Russian” territory, finding themselves in new … countries in which titular nationalities had legitimately become masters of their own nation-states.

Platt’s book is concerned with the conceptions of identity of Russians and Russian-speakers in the Near Abroad: “Their status is sui generis, neither national nor diasporic, neither integrated into ‘mainland’ Russian society nor entirely divorced from it, never displaced but out of place nevertheless,” Platt said. As a result, in these territories Russian culture occupies distinctive and complex positions.

Platt’s emphasis is on the heterogeneity of the Near Abroad as a both geographic and cultural category. “The status of Russian culture and Russians themselves within it varies enormously,” he said. In terms of the historical context, Platt offered that in Latvia, a “history of Russian domination, early 20th-century independence, Soviet occupation and social engineering resulted immediately in fraught relations between ethnic Latvians and Russians” at the break-up of the Soviet Union. Platt also argued that Latvia provides a unique example in a number of ways. Compared to the interconnectedness between Russian and Ukrainian cultures, “Russians and Latvians occupied separate worlds.” Unlike in Uzbekistan and Kazakhstan, where Russian culture enjoys high social status among the majority, Latvians privilege their own language and culture. Most importantly, as Platt reminded, 34 percent of Soviet Latvians were ethnic Russians in 1989 (and another 10 percent were also Russian-speakers), a much higher percentage than in most other post-Soviet republics. Estonia, a similar case, is more territorially segregated by ethnicity than Latvia. While aware that the people he is applying the term to might not always agree with it, Platt said he uses “Russians” as a shorthand to mean Russians and Russian-speakers, in a reflection of the messiness of categories of identity in the region.

Borrowing a phrase from Punte’s poem, Platt argued that, “with no ‘terminological neutrality,’ the Russian presence in Latvia is problematic and deeply contested. “In 1991, the Latvian state was declared legally continuous with the interwar Latvian Republic. In a clumsy, yet comprehensible political response to the near minority status of Latvians on their own territory, only citizens of the Interwar Republic and their descendants gained automatic citizenship. This left all others … stripped of any economic and political rights. … In 1995, a special category of “non-citizenship” was created for this large category (nearly 30 percent of the population), the majority of whom self-identify as Russians.

Many non-citizens have refused to naturalize out of protest and many have emigrated, but many others have chosen not to leave, as is evident in the fact that only 15 percent of the Latvian population are “non-citizens” today.

On the other hand, terms used for this population in Russia are also “far from lucid,” Platt said. Since the late 1990s, the law there has granted special privileges with regards to travel, access to medicine and education and immigration to Russians living in the Near Abroad who are classified as “compatriots abroad.” Platt problematized this category by calling it temporally confused term, that could arguably refer to any former citizen of the Soviet Union (de facto citizens of a shared state who were sundered by post-Soviet state borders) or, as seems to be the case in Putin’s more recent pronouncement, ethnic Russians who found themselves in suddenly “non-Russian territory.” Yet given the complexity of ethnic Russian identity following centuries of social and cultural assimilation… determining which former Soviets are the “real” ethnic Russians is not so easy, either.

The category has been focused in revisions of the law in terms of the “free choice of people of spiritual and cultural and legal linkage with the Russian Federation.”  Yet if being Russian in the end boils down to free choices of spiritual affiliation, Platt asked what this free choice entailed: “Can one write in Russian without making a free choice to be spiritually and culturally linked to Russia?”

Next, Platt dissected the geographical term Near Abroad, emphasizing the connotations of intimacy and personhood in the Russian adjective, blizhnee, in comparison with the spatial adjective blizkoe. Noting the oxymoronic nature of the term, which denotes something close but distant and populations who are both compatriots and foreigners or who fit neither category, Platt argued that Latvia epitomizes this conception. “It is one of the nearest spaces, historically, territorially, linguistically and ethnically. Russians have lived here for centuries and formed a proportionally larger portion of the population than in any other post-Soviet country,” Platt said. “In another way,” he added, “Latvia is one of the most ‘abroad’ territories: Member of EU, NATO, positioned in the West, defined by its non-Slavic titular nation. It is at once theirs and ours, near and far, exotic and homey, in an ironically charged conception of political space that that correlates precisely with the contestation of social identities of Russians in the region.”

In Platt’s argument, this complex “half-way geographical condition” defines the cultural life of Russians in the region. “Russians in Latvia assume a number of distinctive stances across a disunited social scene,” typical of the “in between” position fundamental to post-colonial subjectivities, Platt explained. To illustrate the complex dynamics of self-fashioning through intentional cultural activity, Platt offered three cases. The first was the conundrum of Vera, a school teacher. Here Platt summarized certain common places among Latvian Russians, including that Russians are “more cultured than they are across the border to the east”—that Russians in Russia are “emotional and vulgar” and offen guilty of “khamstvo,” while those in Latvia are restrained, even-tempered, and have more “European” qualities. These conversations, Platt said, often take on nostalgic overtones “because Russians in Riga know the culture that distinguishes them is that of the past.” Vera, who articulated an “unjust Russian victimhood” to Platt, struggled to counteract what she perceived as “a war on Russians” in the Latvian education system. She organized cultural tours to Russia, but admitted it was a difficult experience for her; “people in Russia are rude, lacking in culture and unpleasant to deal with.” To Platt, “Vera’s experience exemplifies the ‘in-between’ nature of post-colonial situations … in the seeming impossibility of determining a proper location for culture or a proper cultural identity.”

Not all Russians aspire to unity with Mother Russia as a whole, however. Platt’s second example was a case in point: for members of the Orbita Poetry Collective, Russian culture in Latvia is not a a relic of the past but “an ongoing avant-garde project.” The importance of multilingualism to their project, their collaborations with an extensive network of musicians and the cosmopolitan mix of ethnicities represented in their audience make them the inverse of Vera’s configuration. At first glance, Platt pointed out, “Vera is near and these poets are abroad.” But while the Orbita poets’ cultural stance seems distant from Russia in various ways, they are also closely tied to the cultural scene in Russia, albeit more to non-state actors, publishing houses and festivals, in distinction from Vera, Platt explained.

Platt’s third case was of oppositional voices relocating from Russia to Latvia and establishing new media and publishing institutions there, such as the former editor and staff of Lenta.ru which founded the Riga-based news aggregator Meduza. When asked about her vision for the site, founder Galina Timchenko told Platt that she was not interested in the views or interests of Russians outside of the Russian Federation, since “it is not my goal, whether I’m located in Latvia or in Bulgaria, to look at the world from the perspective of a person in Bulgaria.” Ironically, Meduza “represents the narrow global vision of Moscow elites, rather than an alternative conception of de-centered Russian space,” Platt argued. To Platt, these three cases together demonstrate the specificity and heterogeneity of “near abroadness,” while pointing to the fragility and mobility of the concept.