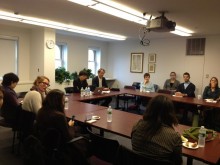 Elizabeth Banks is a Graduate Student in NYU’s History Department.

“God blessed Vasilisa with the greatest courage of all”

Last Friday the Jordan Center joined with the NYU History Department’s History of Women and Gender group to welcome Anna Krylova to Washington Square. We enjoyed a lively discussion, stimulated by Krylova’s paper on how findings from her research into Soviet re-thinking of gender categories and the acceptance of the woman-soldier identity can be applicable to the field of gender history as a whole.

To begin the event, we viewed clips from Sergei’s Eisenstein’s 1938 film Aleksandr Nevsky which highlight women’s differing reactions to a time of war. As Novgorod is attacked, one maiden chose a traditional path by pledging to marry the most courageous warrior, while another, Vasilisa, responds by donning chainmail, taking up the sword and eventually proving herself as the bravest soldier. (Is it note-worthy that we never found out the name of the “traditional” woman?) Neither of the women loses her femininity and at the end of the movie, they find love as part of a heterosexual couple. That these two female protagonists are able to take different paths while retaining their identities as women, shows that Soviet society allowed for multiple, non-oppositional ways of realising your womanhood. It is significant, Krylova noted, that the directors of this film about thirteenth century Russia even chose to include this gender-disrupting, gender-probing storyline at all.

Using issues raised by these film clips, Krylova challenged the persistent notion of gender binaries, even within gender history. She noted that even as scholars accept multiplicity and flexibility of gender identities, they continue to center on the male-female, masculine-feminine binary. In a binary situation, when a part of one identity changes, there is a move towards the other. In Aleksandr Nevsky however, as in other spheres of life, this not the case. Krylova argued that although the woman-warrior in Aleksandr Nevsky changes the traditional idea of female identity by engaging in combat, this does not masculinize her. This echoes the argument Krylova makes in her book, Soviet Women in Combat, that Soviet women soldiers fighting during the Great Patriotic war were expressing — not repressing  — their female identity, and created a feminine space even at the front lines. Likewise, in Aleksandr Nevsky, Vasilisa does not move from the female sphere of the home front to the male sphere of combat, but fully expresses her female identity in a different place. Heterosexual attractiveness does not disqualify her from being an effective soldier, nor obscure her battle-field prowess, but disrupts the binary between female and male-solider. After highlighting key developments in gender history since the 1980s, Krylova suggested that Aleksandr Nevsky and the Soviet case can help and encourage historians of gender to continue to re-think their categories, especially in the way historical narratives are structured.

Krylova’s fascinating paper sparked a lively and involved discussion. One set of questions focused around whether Vasilisa’s combat identity was temporary and exceptional. One commenter suggested that women could be recruited as soldiers simply in order to double population power in a time of exceptional need. Another commenter referred to the scene in Aleksandr Nevsky where a male soldier claims Vasilisa as his bride, and introduces her to his mother. As Vasilisa meets her mother-in-law-to-be, her braided hair shines beneath her helmet as she smiles coyly and modestly looks down. This commenter suggested that in this scene Vasilisa’s original and fundamental gender identity is being re-inscribed, demonstrating that a “traditional” woman-identity cannot be changed by counter-examples. This question touched on an important interpretative point – does being flirtatious obscure your combat identity, or transform and feminize it?

We also spent some time debating why we focus on the military and combat as the “most male” sphere of action, with Krylova and others discussing the importance of labor and education in forming and expressing female identities. We discussed terminology; is “non-oppositional binary” a possible conceptual term? Is “difference” a better choice? We considered how important it was that new forms of womanhood emerged within a heterosexual framework, and whether the nameless, traditional maiden could have flexed norms even more by marrying Vasilisa in recognition of her being the bravest warrior. We decided no; Soviet society would never have considered that a female homosexual relationship. One of the last questioners referred to some suggestions that the “gender moment” is “over” in certain historical fields, but voiced her commitment that there is more fruitful work to be done. This week’s questioning certainly shows that there is.

See images from this event here.