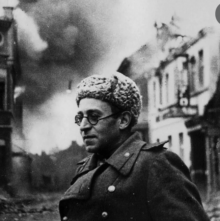 On October 14, 2021, the Jordan Center hosted Robert Chandler for a talk titled “Literature and Reality.” Chandler is an editor and a literary translator with an impressive portfolio: he has translated Alexander Pushkin’s The Captain’s Daughter; Nikolai Leskov’s Lady Macbeth of Mtsensk; several collections of stories and memoirs by Teffi; Vasily Grossman’s An Armenian Sketchbook, Everything Flows, Stalingrad, Life and Fate, and The Road (all out with NYRB classics); and Hamid Ismailov’s Central Asian novel, The Railway. He is the editor and main translator of Russian Short Stories from Pushkin to Buida and Russian Magic Tales from Pushkin to Platonov. A recording of this talk is available on YouTube here.

Chandler began by noting that Grossman’s interweaving of fictional narrative with lived experience is an “unusually important part of the story.” For instance, in Grossman’s short novel Everything Flows, Ivan Grigoryevich returns home after spending years in a labor camp. He tries to find his place in the world, befriending an 11-year-old boy, the son of his landlady. For fun, the boy makes little clay animal sculptures modeled on illustrations from his books. Ivan Grigoryevich becomes close to the boy and his mother.

On a trip to Moscow to meet with Grossman’s granddaughter, Yelena Fedorovna, Chandler recalls that she showed him a room with Grossman’s things, where the translator was shocked to see the same line of little sculpted animals that had featured in Everything Flows. On this point, Chandler remarked that “they seemed real enough in the book, but nevertheless [it was a shock]” to see them in real life. It seems, then, that the figure of the young boy was inspired by Grossman’s own life, elements of which the author deliberately wove into his prose.

Chandler went on to speak about the novel Stalingrad and its protagonist, nuclear physicist Viktor Strum. One day, he received a letter from the historian Tatiana Dettmer about a woman in her nineties named Yelena L’vovna Strum, whom Dettmer had encountered in the course of her studies of oral history. Strum was the daughter of real-life nuclear physicist Lev Strum, declared an “enemy of the people” and executed in 1936. Lev Strum was an energetic and charismatic physics professor who had taught Grossman, then deeply engrossed in the natural sciences, in mid-1920s Kiev.

After repressing Strum, Soviet authorities sought to eradicate his very name from the written record. Only in the past 10 years have Russian and Ukrainian physicists “resurrected” him. Per Chandler, Strum must have been of “extraordinary importance” to Grossman given his inclusion in the author’s fictions, and especially given Grossman’s ferocious battle for the right to publish his work. Why, asked Chandler, would Grossman take the risk of giving his fictional hero the name and physical description of an “enemy of the people”? Only “extraordinary courage” could have motivated such a choice, as well as the importance of Lev Strum’s memory to Grossman. According to Chandler, the physics lectures featured in Stalingrad are actually recorded lectures that Grossman attended.

After discussing the relationship between reality and fiction in Stalingrad, Chandler moved on to his current translation project, The People Immortal [Народ бессмертен]. Two characters in this novel, Commissar Bogarev and Captain Babadzhanian, are closely based on real people. Grossman met the real commissar, Commissar Schliapin, in September 1941; thereafter, Shliapin appears periodically in Grossman’s wartime notebooks, for instance as the author of an account of enemy encirclement. Though these accounts may seem incredible and, to use Chandler’s term, “propagandistic,” they are completely real and unfabricated.

Grossman’s eye for detail misses little, from soldiers gathering berries to make kisel’ (a viscous fruit dish) for their wounded comrades, to “tough-minded” moments where Shliapin punished soldiers for their lack of discipline––even having some shot for their actions. Chandler evinced surprise that some of these episodes made it into print considering their shocking nature. Yet readers loved Grossman’s writings and even wrote to the army newspaper Red Star in praise of Grossman’s work.

Whereas Grossman disguised the still-living Shliapin with a pseudonym, the real Captain Babadzhanian was thought to be dead, so the author used his real name. Later, Grossman visited a tank brigade in Ukraine where Babadzhanian was serving and found the man very much alive. In meeting the real-life model for his fictional character, Grossman discovered that Babadzhanian was quite cheeky with his superiors. This element is reflected in The People Immortal, in keeping with the perennial theme of independence and “the need to take initiative in all fields of life” so vital to Grossman’s work.

Chandler then turned to some of Grossman’s last short stories, which he characterized as “perfectly written masterpieces.” Mama, for instance, is based on the real story of the adoptive daughter of Nikolai Yezhov, head of the NKVD during the Great Terror of 1936-1938. In this story, the readers get a glimpse of his household through the eyes of the five- or six-year-old daughter and her peasant nanny, who is as “astute psychologically” as she is “politically ignorant.” Grossman paints a vivid picture of an elite cultural salon run by Yezhov’s wife, Yevgeniia Khayutina. The real-life counterpart to Grossman’s character lived a long life, dying in 2016. She remembered her father fondly and said she had a good life there before being sent to a wartime orphanage for children of “enemies of the people.” Clinging to her love for her father throughout her life, she later petitioned for his rehabilitation. As Chandler put it, “she saw both herself and her father as victims of the Purges.”

In the final section of his talk, Chandler discussed two letters Grossman wrote to his mother, who was murdered by the Nazis in 1941. Grossman was wracked with guilt over being unable to rescue her and bring her to Moscow. He wrote about wondering about his mother’s last moments and how she may have felt. These guilt-ridden speculations inspired an episode in Life and Fate, where a childless doctor takes charge of a young boy during their transport together to the gas chambers, comforting him in their final moments — when, at the point of death, she finally “becomes a mother.” This story, for Chandler, is both a love letter of  a mother to her son, and a reciprocal love letter of a son to his mother.

Chandler finished his talk with a quote from Grossman, who compared modern poets to jewelers, rather than bakers of bread. This was not (exactly) a compliment: for Grossman, poetry should resemble not a beautiful jewel to be admired and cherished, but the daily bread the body requires to sustain itself.