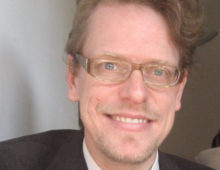 On September 21st, 2016, the Jordan Center for the Advanced Study of Russia at NYU welcomed Lucan Way, a political scientist from the University of Toronto, for the first event of the Fall 2016 semester. Way, who spoke on “Revolutionary Origins of Soviet Durability,” was welcomed by newly appointed Jordan Center Director Joshua Tucker. “Lucan has been instrumental in developing more nuanced tools for beginning to understand distinctions across different non-democratic regimes,” Tucker said. He cited Way’s book Competitive Authoritarianism: Hybrid Regimes after the Cold War with Steven Levitsky (Professor of Government at Harvard University), which has had a huge impact in the field of political science.

Way’s talk focused on data and analysis from his new book project with Levitsky, The Durability of Revolutionary Regimes—authoritarian regimes that emerge out of sustained, ideological and violent struggle from below, and whose establishment is accompanied by mass mobilization and significant efforts to transform state structures and the existing social order. According to their data, since 1900 there have been 19 revolutionary regimes, 70 percent of which survived for 30 or more years, compared to non-revolutionary regimes, which lasted an average of 16 years. “[Revolutionary regimes] have been among the most durable forms of authoritarianism in the modern era,” Way said.

Way’s interest in revolutionary regimes does not solely stem from the fact that they lasted for long periods of time, but also because they survived in the face of extraordinary crisis. He mentioned a slew of obstacles facing various 20th-century regimes: large scale famines in the Soviet Union, China and North Korea; steep economic downturn in the 1930s USSR and 1990s Cuba; severe external pressure in the Soviet Union, Cuba, Iran and Vietnam; and self-inflicted chaos in China during the Cultural Revolution.

Moving on, Way charted the typical narrative arc for a revolutionary regime. Because almost all revolutionary regimes are born weak, he said, it is common to see behavior by the government that lacks short term rationality, but contributes to the durability of the regime in the long term. “When these governments come to power, they engage in really radical transformation that challenges the global and domestic order, which in turn creates counter-revolutionary conflict and war,” Way said. This generates a “siege mentality”—paranoia and fear of internal enemies—which leads the authoritarian to build a strong and loyal army from scratch that will destroy any alternatives to his rule.

“As a result, the ruling party and army are tightly fused” and face almost no opposition, Way said. “One of the most remarkable things about authoritarian regimes is that they have almost no coups.” To use the Soviet Union as an example: although the Mensheviks suffered enormous oppression under the Bolsheviks, they were unwilling to oppose their oppressors because of the fear of counter-revolution. “They supported the revolution, even one that repressed them, because the alternative was much worse,” Way said.

When the Soviet state emerged, it faced a host of complications. It was isolated in the international sphere, the party changed drastically over the first few decades, and the regime suffered through multiple severe crises, including the Red Kronstadt Rebellion of 1921, Lenin’s death in 1924, collectivization and famine, the Great Terror of the 1930s and the Nazi invasion. But, Way said, “it still had core elements of the Soviet system, which would be important for its durability: a cohesive party and strong security services.” The Soviet Union went on to last 74 years.

Although some of these problems were endogenous and initiated by Stalin himself, the regime endured because the Bolshevik Revolution and the Great Terror had previously eliminated any alternative to the leader, Way explained. “One of the most important reasons that authoritarian regimes are able to survive is often because there’s simply no one to replace [the leader], so it gives enormous room for error,” Way explained. Following Stalin’s death, the Soviet revolutionary legacy gradually deteriorated, as leadership fixated increasingly less on the inherent conflict between capitalism and socialism. In its void, the party reemerged as a powerful institution. Still, this “doesn’t explain the first 40 or so years when the party as an institution was relatively weak and the country faced the most severe crises,” Way said.

Reflecting on his work, Way refuted one plausible counter hypothesis. “If you look at these regimes, almost all of them had strong political parties. So an obvious counter argument is that it’s not about revolutionary origins, it’s about the fact that they have robustly institutionalized political parties,” he said. But even when Way controlled his data for political parties, the results were still significant; further evidence in this regard emerged from case studies, including the Soviet one. “Clearly party by itself does not explain everything because how do you explain the fact that in the Soviet Union, the party was virtually decimated in the late 30s and [the USSR] survived World War II?” he said.

In the Q&A session that followed, Anne O’Donnell and Jane Burbank, Professors of History at NYU, asked Way to expand on his analytical framework and terminology. O’Donnell asked Way to clarify his definition of “revolutionary origins” and how they can be distinguished from “ideology.” Burbank furthered the discussion, asking Way to explain his use of the term “durability.” “Anything that lasted 31 or 16 years is just a blip on the historical horizon,” she said. “Are we supposed to think that something that lasts 74 years is long-lasting, or [is it implicit that we are] supposed to think it was supposed to go away and it didn’t?”

Burbank also interrogated Way’s framework, noting the many elements of continuity between the Russian imperial regime and the Soviet state. “So many possibilities for sustaining a revolutionary regime in Russia come from earlier times,” she said, citing one-man leadership, a strong bureaucratic apparatus, legalistic aspects and the Cheka. In response, Way argued that “surviving as a non-democratic ruler drastically changed in the 20th century after the onset of mass politics and the widespread expectations of political participation.” He added that within the context of authoritarian regimes in the 20th century, the Soviet Union’s long tenure remains remarkable. Looking forward, Sam Casper, Jordan Center Writer in Residence, wondered what Way’s model can say about post-Soviet authoritarian regimes, many of which are now in their 25th year. Although Way’s study wouldn’t include these regimes because they haven’t faced massive crises, “there is a kind of legacy for the revolution,” Way said. “The party is obviously totally gone, but the Cheka is still there in many ways.”