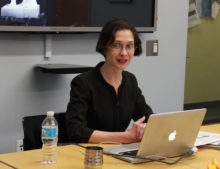 On March 3, the Jordan Center’s Spring 2017 Colloquium Series hosted Margaret Samu, Jordan Center Writer in Residence and art historian who teaches at The New School’s Parsons School of Design, for a discussion of her paper titled, “Art Collecting and the Female Nude in 18th to Early 19th century Russia.”

The colloquium was devoted to the first chapter of Samu’s manuscript in progress. Titled Russian Venus: The female Nude in Art and Culture of the Imperial Era, the manuscript examines the female nude as a subject in art in eighteenth and nineteenth century Russia. The chapter in discussion focuses on collecting, beginning with the era of Peter the Great, who imported the first nudes for display to an elite audience at his palace and gardens in St. Petersburg and Peterhof. Drawing on recent studies of the art market in St. Petersburg and Moscow, as well as rare primary sources, including auction catalogs, Samu attempts to trace the patterns of collecting and display that emerge when this distinctly European subject arrives in imperial Russia. Additionally, Samu was interested in the production of nudes by Russian artists of the time. The chapter argues that “the ready acceptance and popularity of these imported nudes created a demand that Russian artists sought to fill.”

As part of her primary document research, Samu compiled a database of over 200 images, mostly by Russian artists, and compared them to those by European artists and collectors. Her primary sources also included collection and auction catalogs and inventories, art criticism, memoirs, poetry and fiction. She used several interpretive lenses, including transnational art and feminist and gender studies. The trajectory of the nude’s reception as Samu traces it in the chapter is acceptance in the beginning, followed by a shift in reception in 1860s, when “realist critics and artists related to the movement and criticized it as foreign and not related to Russian problems.”

In the rest of Russian Venus, Samu looks at the art market, the Russian artists who travelled to Europe and used the female nude to showcase their cosmopolitan side in the European market, artists’ models and access to them, the female nude in the age of Russian realism, and finally in a chapter titled “National Undress,” at distinctively Russian themes to depict the nude, like rusalka or vanya instead of the venus.

Pointing to The Judgment of Paris (1776), brought to Russia by Ivan Shuvalov, one of the leading educational figures and collectors of the time, Samu said, “when I started this research a lot of people told me Russians didn’t have or look at nudes, and that Russian models wouldn’t work as nude models.” Her research showed that for a considerable amount of time, the nude was not considered inappropriate but was part of the artists’ education, accepted as a mythological theme, especially the basis of the Iliad.

Regarding Russian anxiety about the authenticity of art works, Samu explained that in the 17th century, Western European connoisseurship started to develop when people could tell better artists from worse, or detect an artist or their assistants – skills Russians started to acquire in 18th and 19th centuries. “In time, the notion of certain names’ weight becomes important,” Samu said, pointing out that there were collectors, such as the Yusupov family, who were very happy to have a Rubens and even if they couldn’t acquire the original, “the copy would be registered in the catalogue as ‘Rubens, copied by […]’ instead of ‘[…] after Rubens.’”

Referring to a possible parallel to the literature of the era, Anne Lounsbery, Associate Professor and Department Chair of Russian and Slavic Studies at NYU, pointed out that while taste in Russia trickled down from the court, the situation was quite different in Europe at the time, where while not exactly democratic, connoisseurship was still not generated by one person but often by a group of professionals. This tendency in Russia was also evident in the establishment of the Imperial Academy of Arts by Peter the Great with the agenda of creating artists, as opposed to professional artists demanding such an institution, Samu noted.

Susan Smith-Peter, Associate Professor of History at CUNY Staten Island and President of NESEEES, pointed out it was important to have a sense of the setting in terms of the transition from an acceptance of copies to obsession with authenticity; “it’s not so much [about] what is authentic but what is Western,” she remarked. Samu agreed, adding that the plastic cast was widely accepted as copying method, made directly from the objects in collections themselves. “So this degree of authenticity or closeness to the source was really important,” she said.

Erin McBurney contributed that it was also important to underscore the “tectonic shift” in the representation of the female form in Russia, where unlike Western Europe there was no real exposure to antiquity, and up until the 17th century the representation of human form was “completely prescribed and icon-like.” Female forms were either the Mother of God, or other saints. McBurney pointed out that even Jean-Marc Nattier’s painting of Catherine I (1717) was considerable shift in its revealing depiction, and suggested Samu included more on this transition, possibly including a comparison between the representations of the tsars.

Cynthia Hyla Whittaker, Professor of History at Baruch College, added that the transition from baroque to neoclassical could be another factor to consider. While Peter the Great’s reign was still within the baroque period, “as the century moves along neoclassicism becomes the ultimate ideal and the emergence of the Greek and Roman nude makes sense with the intellectual zeitgeist,” Whittaker offered.

Participants also brought up the role of eroticism. Although Samu’s deals with reception and thus mainly what people view in public, McBurney offered that “the placement of nude figures on ceilings and/or in bedrooms lends itself” to that interpretation. Smith-Peter brought up serfdom as a historical factor to include in the chapter, in this instance to discuss how that element would shape reception, especially in masculine private spaces where power dynamics come into play.

On the question of the source of the fascination with Venus—what brought it to Russia—Samu explained that Venus was the one figure who was supposed to be naked; her nudity was appropriate. “Of the Greco-Roman deities, female figures in particular, Hera or Diana might be dressed but Venus was always naked,” Samu said. Participants mentioned it was also worth thinking of Venus’ role in the new regimes of beauty and changing ideas about love and marriage.

Why did Samu choose the female nude as the art form to trace Russia’s Westernization, instead of landscape painting or genre painting, for instance? In Europe and consequently in Russia, Samu explained, the nude was the more prestigious subject, associated with history painting, which had to do “with knowledge of history, ancient mythology but also the anatomy.” At the same time, while academy study emphasized the male nude and using female models was not an option, in private studios artists could hire female models independently, and once they graduated they could prove their independence and professional status by showing female models. In addition, Samu said, “[the nude] brings out certain controversies that landscape paintings don’t; questions about realism, taste and art criticism.” “These are the questions I want to address about Russia, and its art world sharpens when you look at the female nude,” she added.