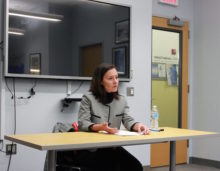 On April 6, 2017, the Jordan Center for the Advanced Study of Russia hosted Maria Cristina Galmarini-Kabala, Assistant Professor of History at James Madison University. As part of the Colloquium Series, participants discussed Galmarini-Kabala’s paper, titled “The Violence that Makes Children ‘Psychically Sick’: Wars, Medical Diagnoses and Everyday Life in a Soviet Psychiatric Institution,” a “micro history” of the Child Psycho-Neurological School-Sanatorium that operated in the city of Perm between 1926 and 1929.

In her introductory presentation, Galmarini-Kabala provided an overview of the article in progress, which analyzes the interactions between medical experts, child patients and their parents in the Sanatorium within a framework of violence, “both as a structural cause of child abnormality and as a force shaping the processes of medicalization and normalization.”  Galmarini-Kabala said she drew on a body of literature in the social history of medicine which “has criticized medical diagnoses for reducing human suffering to fixed pathological categories and grounding rights to care in claims of victimization.” While the Soviet prison and the sanatorium were both “sites of disciplinary power (violence as a tool of control),” Galmarini-Kabala argued that the interactions between the various actors in the latter, as well as “their negotiations over the meaning of children’s psychic ‘defects’ reveal that violence in the asylum should be located along a continuum of relations between harm and cure, threat and care.”

Jane Burbank, Professor of History at NYU, started the discussion off by addressing Galmarini-Kabala’s “big question,” namely whether violence was the right framing for the material at hand, especially since the paper made it evident violence happened in certain ways inside and outside the institution.

Burbank also asked about the outlying prominence of [Anton] Makarenko, perhaps the most famous Soviet pedagogue, and the subject of the 1955 film Road to Life. Galmarini-Kabala recommended Dorena Caroli’s analysis on the subject, which she said demonstrates that Makarenko became famous afterwards, not as he was doing his work. “A myth was created around him as ‘fixing’ these children,” Galmarini-Kabala said, even though until the 1930s, when the Commissariat of Health began to fund these institutions, it was the Commissariat of Internal Affairs that had more of a say in dealing with “morally defective” children, and unlike the pathologists who wanted to reform the children, for Makarenko it was about discipline.

Anne O’Donnell, Assistant Professor of History and Russian & Slavic Studies at NYU, inquired about the children in the Sanatorium: who were they and what was the nature of their issues? Even if they had structural psychological issues, O’Donnell said, because the language in the paper is “ultimately of morality,” it led her to question if the failing of the children was social. Especially considering the socio-economic conditions of the period, this also brought up the question of whether being in the institutions was a privilege.

Indeed, Galmarini-Kabala said, considering the alternative, the orphans were privileged to be there. The other children were privileged in the sense that by being inside, they avoided starvation, homelessness and criminals. On the other hand, they were free to leave, unlike those children that were sent there by their parents, some of whom believed in social vospitanie, where the state shares the responsibility of bringing up children with the family, and some of whom were simply unwilling to deal with children. Overall, “it was a very heterogenous group of children,” Galmarini-Kabala said.

On the question of the children’s psychological issues, the change in the medical discourse poses some challenges, Galmarini-Kabala explained. While several encyclopedias and dictionaries of the time used the term “defective,” the late 1920s witnessed lots of controversy on the terminology of abnormal children. Pathologists agreed on three types of children who “deviated from the norm,” Galmarini-Kabala said, noting also that another difficulty with terms was the lack of precision; in this case, what is norm and what is deviation was not clearly defined. These deviations could be physical defections (physical impairments), cognitive defects (learning disabilities) and “elevated nervous sensibilities.” Children diagnosed in the second category (children with “bad brains”) were not taken care of by these institutions, which took in those with “neuropathic, psychopathic issues, but with good brains.”

Within the context of violence, Eliot Borenstein, Professor of Russian and Slavic Studies at NYU, said he was intrigued by the section in the paper on allegations of beating. Noting the long history of how people respond to other people’s declarations of abuse, and that there is indeed “no context for them for not being beaten, regardless of time or place,” Borenstein said the “basic epistemological question” nevertheless remained: “How do we decide or situate ourselves to figure out what happened? Do we allow the doctors to have the last word while they are so complicit?”

“Weren’t all children beaten by parents, why the big deal?” Galmarini-Kabala agreed, but said that she wanted the story to be there because of its contrast with the theory. But ultimately, she said, “we don’t have evidence to know what happened and [it is] not my job in this paper to investigate.”

Sam Casper, Jordan Center Writer in Residence, posed another “big picture question,” namely if there is “anything distinctly Soviet about these children and their predicament,” since, he pointed out, much of the story is reminiscent of industrialized/industrializing countries in the aftermath of the war. In the therapies offered at the institution, Casper added, it was not exactly clear if anything was pitched or phrased in terms of Marxism-Leninism. “Was there an imperative there to give these kids socialism?” Casper asked.

In response, Galmarini-Kabala acknowledged that she found more and more parallels with European, and even Western European contexts, but said several aspects of the story are nevertheless distinctly Soviet, such as the relations of Commissariats, the management of resources and funding and the hierarchies of power. Even though in the daily life of the institution there is nothing that’s political, Galmarini-Kabala argued, in the Soviet Union, “it was the unique responsibility of the state to fix these children.”

Joining the debate on Galmarini-Kabala’s theoretical framework, Yanni Kotsonis, Professor of History and Russian and Slavic Studies at NYU, said he liked that the author “didn’t treat categories too seriously but rather [used them] to explore,” and suggested to scale the  historiographic section down to avoid a fixed single frame. Referring to Galmarini-Kabala’s claim in the conclusion of her paper “that the ‘psychically sick’ child in post-revolutionary Russia was a construct of the psychiatrists’ gaze as much as a product of that environment’s structural violence,” Kotsonis wondered if it might be “more useful to begin with this notion,” in order to establish it up front that the author is not studying the issues at hand to “ask if they are true.”

Kotsonis also said that he found it interesting to think about a discipline “torn between accommodating the person as they are and bending the person to fit the system.” It very much sounds like what we do here, he said.