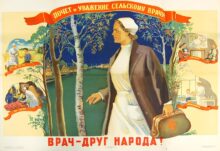 On November 2, 2020, the Jordan Center welcomed Kenneth Pinnow for a talk (click here to watch the recording) on the doctor-patient relationship amid the Soviet state’s undertaking of providing universal public health in the 1920s and 1930s. Dr. Pinnow is Professor of History and Global Health Studies at Allegheny College. He currently holds the Henry B. and Patricia Bush Tippie Professorship and recently served as the director of Allegheny’s Global Health Studies Program. He is the author of Lost to the Collective: Suicide and the Promise of Soviet Socialism (Cornell, 2010), and has published on criminology and the social sciences in the early Soviet Union. He is currently researching the history of medical ethics and research in the Soviet Union, with an emphasis on the formative decades of the USSR. The talk was introduced by Yanni Kotsonis, Professor of History and Russian & Slavic Studies at New York University.

“This is a lot about doctors trying to find their place in the new revolutionary order [and] to script the drama of the doctor-patient relationship through laws and regulations while they await the [imminent] cultural revolution,” said Pinnow, hinting on a rupture from the doctor-patient relationship that was otherwise founded on liberal assumptions about the leveling of power and reciprocal obligations.

Citing anthropologist Douglas Rogers, Pinnow considered ethics to be what is called a “field of power,” where one actor or group attempts to impose its notions of proper persons or proper relationships on another. He introduced a growing body of historical literature that offered critical accounts, some of which saw medical ethics as the hiding ground of the monopolizing power of medical professionals.

To study Soviet medical ethics is partly to look at the debates among Soviet doctors which often took place in dialogue with other representatives from other professions and authorities. These debates raised questions about the ideal qualities of the Soviet physician, the doctor’s rights and obligations, and their relationship both to patients and society as a whole.

“Medical ethics is about negotiation, enforcement, and the institutionalization of norms and morality,” suggested Pinnow.

Basing his findings heavily on a variety of published sources (e.g., medical press), Pinnow then gave us an overview of the Soveit doctors as a mediator of the Soviet workers and the Soviet state. In the context of the Soviet regime’s transformational projects (e.g., the creation of Narkomzdrav, People’s Commissary of Health, 1919), doctors became state employees of a regime that aspired to create a system of universal healthcare. (Private medical practices, amounting to 10% of the total, were never banned, but the state made it very difficult for their continuation.) They were made into social workers, expected to be active in the community with a holistic approach of promoting health through the inspection of homes, the workplace, and through education. They played a key, gatekeeping role in the labor discipline of Soviet workers, who needed medical certificates to avoid penalties for being late to work or missing work.

Soviet doctors were then caught in an ethical and epistemic crisis. “They’re debating things like, should they have their own ethics (can we even talk about medical ethics?!), or should they have a set of ethics that is shared by all of society,” said Pinnow.

At the same time, the space that health and medicines occupied in the Soviet public was also changing and becoming politicized. Pinnow argued that the doctor-patient relationship was increasingly constructed as part of the new society that the regime tried to normalize as part of everyday life. On the one hand, more doctors were produced and trained, though Pinnow urged us to recognize that the increase in personnel did not guarantee better medical quality. On the other hand, more citizens were encouraged or forced to see doctors (as opposed to folk healers), as the personal health and wellbeing of a conscious Soviet citizen went from being an individual affair to becoming a matter of concern to the collective Soviet society.

“What we start to see in the late 1920s in public forums and journalistic articles are gatherings and debates about topics like medical mistakes and the public dissatisfaction with doctors in general. These are all expressions of doctors’ anxieties about their status and treatment by patients.”

Many outlined “abnormal and unhealthy” doctor-patient relationships, some of which had deadly consequences: threats of violence, the beatings of doctors, and in some cases, threats of murder or outright murder.

Pinnow then offered an anecdote of the 1927 murder of doctor Esterman by a working-class cleaning woman, whose son died of the doctor’s misdiagnosis. During her trial, she stated that one of her motives was to prevent Esterman from ever treating anybody else in the future. The mother’s subsequent verdict and imprisonment raised further questions about justice.

As the talk turned to explore the patients’ perspectives, there was less leeway to rely on official publications than to suggest speculations from other sources. In answering where the patients’ dissatisfaction might have come from, Pinnow named a shift in the doctors’ form of support from playing the traditional, therapeutic role to a more cost-effective, preventative aspect under the new Soviet regime. This led to popular complaints about doctors performing perfunctory exams on patients’ kids, spending only five minutes with the patients (via a quota system on the doctors’ end), and delivering a “factory-like quality” of the whole experience. Medical errors (meditsinskiye oshibki) was a term that dominated the patients’ discontent.

Among them, patients’ outrages were linked to the popular perception of the doctors’ roles as state agents or state workers. This was most evident in the doctors’ determinant roles in preventing labor penalties for Soviet workers. “There was one case where a patient physically assaulted a doctor after [the doctor] refused to let him skip the line for obtaining [medical] certificate. There were also [other] threats of people using violence to get that certificate approved and signed,” noted Pinnow.

Lastly, Pinnow highlighted the class dimension of the patients’ expectation of receiving medical care. “Soviet workers in particular entered into the doctor-patient relationship with a message [from the society] that they should be given preferential treatment and that they have rights to make demands on doctors.”