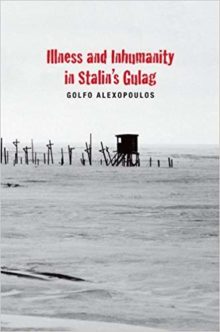 On Tuesday, April 9th, the Jordan Center hosted Dr. Golfo Alexopoulos for a talk on her 2017 book “Illness and Inhumanity in Stalin’s Gulag,” which focused on prison health and labor exploration in the Stalinist gulag camps. Dr. Golfo Alexopoulos is Professor of Russian/Soviet history, chair of the History Department, and founding director of the Institute on Russia at the University of South Florida in Tampa. The event, as part of the Occasional Series, was introduced by Maya Vinokour, Assistant Professor in the Department of Russian and Slavic Studies at NYU.

Dr. Golfo Alexopoulos began her talk by underscoring how the representation of the Gulag has been historically distorted, acknowledging both researchers’ overreliance on Gulag memoirs, and the Russian state’s control of archival information, as factors. A prevailing argument in Gulag academia posits that the cruelty and inhumanity in Stalinist camps was never deliberate or “centrally coordinated”, but rather a product of incompetence, shortages, depletion of resources, and other “external factors” such as the harsh Siberian climates. But in her book Illness and Inhumanity in Stalin’s Gulag, Dr. Golfo Alexopoulos argues, contrary to popular Gulag literature, that Stalinist camps were actually more akin to death camps: a “highly coordinated system of violent human exploitation” to a “degree not previously documented.” What began as an inquiry into the medicinal practices within the Gulag system gradually transformed into a study of prisoners physical exploitation. The Soviet state, according to Dr. Alexopoulos, intended to extract all available energy from the prisoners; “total extermination was not Stalin’s goal, but total exploitation was,” she said. Quoting contemporary philosopher Slavoj Zizek, Alexopoulos explained how the violence enacted by the Gulag authorities was routinized and systemic, “inherent in the normal state of things.” Prisoners were “dehumanized as cheap implements, human raw material” in every labor camp across the Soviet Union. A close look at Gulag medical records proves, according to Dr. Alexopoulos, the existence of a hierarchy within the camps that was based solely on health: prisoners, in accordance to their health, were moved from low priority camps to high priority camps. Food was likewise carefully distributed to prisoners based on their physical strength. Dr. Alexopoulos also documented the Stalinist policy of releasing severely ill prisoners on the verge of death as a measure to save costs and artificially surpassing mortality rates. Finally, Dr. Alexopoulos’ book offers a new estimate on the mortality rate of gulag prisoners that counters the official Gulag estimate: the figure, according to her research, is actually 12 million, which is double the official 6 million.

In the first segment of her book, Dr. Alexopoulos analyzes the implications of a deliberate inmate and food distribution systems among the network of labor camps. Due to an overwhelming amount of academic light shined on the larger labor camps, such as Norrilag in Norilsk, the smaller labor colonies have been largely overlooked, and information about numbers of mortality rates across all camps, skewed. But it was these small labor colonies that rested at the base of Stalin’s “pyramid of camps,” where prisoners with the severest illnesses and physical disabilities were sent. While the state assured that these colonies were designed for short-term offenders, Dr. Alexopoulos’ close analysis redefines the low-tier colonies as “dumping grounds for the weakest prisoners.” Inmates were distributed and transferred from higher tier camps to lower tier camps based on their health. Food distribution was similarly based on physical capabilities: stronger inmates were given larger portions, while weaker inmates were given smaller portions, information that led Dr. Alexopoulos to conclude that food was “insufficient by design.” From the early onset of the Soviet Union, the Bolsheviks learned to weaponize food, and the weaker Gulag inmates were therefore “starved by policy.” Invalids received the same food rations as prisoners in the punishment cell, a correlation that is seemingly not coincidental.

In her second section, which tips the hat to the work of the Nobel Peace prize winning author Aleksandr Solzhenitsyn, Dr. Alexopoulos explores how the Gulag system practiced lethal exploitation by design. Solzhenitsyn challenged the official term “corrective labor camp” for the Gulags, and instead flipped it to “destructive labor camp” – a recharacterization that Dr. Alexopoulos, as a result of her in-depth research of Gulag medical records, feels that she verifies. “One cannot acknowledge the Gulag history fully without acknowledging its fundamental role in exploitation of labor,” Dr. Alexopoulos explained, adding that in the Stalinist system people were “managed, utilized, and discarded as capital inputs in a production process.” The Soviet state reduced prisoners to raw material utilized in construction, mining, and logging, and a close analysis of the Gulag health department records, and its language, buttresses this assertion. While the likes of writer Varlam Shalamov spoke in favor of Gulag medicine, Dr. Alexopoulos derides it, arguing that camp medicine merely sought to “advance goals of production.” The presence of phrases within the records used in reference to the patients such as “maximize labor utilization” and “minimize loss labored days,” and an absence of concerns for health or words for people, exposes the language as very dehumanizing. This was no “ordinary health department,” as the practice of medicine took place within a “penal economic context.” The prisoners, according to Dr. Alexopoulos, were constituted as inputs on a medical grid, and examinations were conducted only with the intention of calibrating labor capability. While she relied little on memoirs during her research, claiming that Gulag survivors often omit encounters with medical personnel out of feelings of shame and humiliation, Dr. Alexopoulos showed the audience a number photos she took of medical records, including a “sanitary card” where a prisoner was categorized as “fit for labor.”

The talk then shifted to an official, state-managed “List of Illnesses” that paired the level of illness to the type of work the sufferer was deemed capable of doing. The list was revised on several occasions, including once by secret police chief Lavrentiy Beria in 1944. The list catalogued how sick prisoners were exploited at each stage of their illness. For example, an invalid, or somebody with highly developed Tuberculosis , would fall into the lowest labor category and considered for release; alternatively a person with mild TB would be subject for treatment and placed into the medium labor category. Counterrevolutionary offenders, however, were required to stay even if subjected to the lowest category, as the camps needed to keep at least 5% of a non-working population in order to avoid scrutiny from central authorities. In a work by Varlam Shalamov, a man with one arm is described beating a path on the snowy ground for tractors. The categories for labor and output were constantly revised, as doctors pushed their prisoners to their physical limits, and camps where labor was seemingly too light, would be accused of leniency. Alexopoulos cited an encounter between a group of labor camp doctors who once sought to push back against these grave classifications, but the Gulag warden who addressed their concerns by bringing to their attention how the elderly with severe ailments continue to work in collective farms.

Dr. Alexopoulus concluded her talk by tracing the trajectory of Gulag prison influxes during certain periods of Stalin’s reign. The numbers of prisoners peaked under Stalin’s final years, and an inability to accommodate the increased numbers drastically made the conditions in the camps of the late 1940s and early 1950s worse than they were during WWII. “Stalin’s [late] penal policies threatened to push the gulag beyond sustainable limits,” Dr. Alexopoulos explained. Since the Gulag archives opened, the fluctuating mortality rates have continued to puzzle researchers. The official gulag mortality rates are lowest during times when camp conditions plummeted, such as the 1936-37 purges and the 1947 famine, where the number of death rates is under 4 percent, and the late Stalin years, where the death rate dropped to under 1 percent – a “truly incomprehensible number in light of the data displayed earlier.” For Dr. Alexopoulos, however, the Gulag’s “wilfully destructive capacity becomes apparent,” and she has therefore made it her mission to tell the stories of the emaciated prisoners referred to as “goners”, or “walking corpses”, who were “too desperate and exhausted to tell their own stories.”