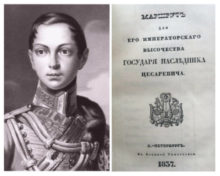 On September 28, the Jordan Center hosted a colloquium discussion titled “Meet the Empire: The Epic Journey of Grand Prince Alexander Nikolaevich in 1837”, on Professor Paul Werth’s in-progress book manuscript. Paul Werth, a professor of history at University of Nevada, Las Vegas, circulated the first chapter of his book that focuses on Alexander II’s 1837 journey across the country, prior to the Tsarevich’s ascendance to the imperial throne. The colloquium was introduced by NYU professor of History and Russian Studies Yanni Kotsonis.

In its entirety, the book will cover events that transpired in Russia during the year 1837, which Werth referred to as a “pivotal year for Russia in its step towards the modern age”. Professor Werth also described the 1830s as a “striking” decade “of innovation and dynamism”, and particularly, a “period of consequence”. The book will consist of ten chapters related to events Werth considers crucial in propelling Russia into the modern age.

Events of socio-economic importance featured in the outline include heir to the throne Alexander’s 20,000-kilometer trip across Russia, the introduction of the country’s first provincial newspapers, the development of the first railroad, the creation of the Ministry of State Properties, and a fire that burned down the Winter Palace. Political events include a “disastrous” attempt at conquering the Khanate of Khiva and a transfer of religious power, while cultural events include Mikhail Glinka’s premier of “a life for the Czar”, which Werth referred to as a “foundational moment” in the progression of Russian national music, the publication of philosopher Pyotr Chaadayev’s “Apology of a Madman” that introduced to Russia the “idea of backwardness”, and the death of Russia’s highly influential poet Alexander Pushkin. Although Werth sees no imperative to commit to a particular order, he is choosing to structure them in a way that he feels is the most logical and coherent.

Professor Werth admitted that he will not focus in depth on any single one of these events, but will rather observe this array of occurrences in juxtaposition and correlation with one-another, presenting a well-rounded portrait of 1837 Russia for an unfamiliar audience. To achieve this, Werth stressed his decision to employ a more accessible and concise style of pop writing, avoiding overly tedious frameworks and unfamiliar jargon. The information stems from a variety of voices, including letters written by the future emperor Alexander II during his journey and newspaper accounts across the country. Werth referenced “Severnaya Pchela”, or “Northern Bee” – a semi-official Russian newspaper published in St. Petersburg during the time.

Professor Werth admitted to grappling with the “fundamental tension” in depicting the rapturous quality of the year – the breakthroughs in innovation and departures from dated schemes that add to the “Russia birth narrative” – in tandem with the personal reactions to living in such an accelerated period. Werth primarily aims to create portrait of what it was like for people to experience certain phenomena for the first time, from founding a newspaper to looking out the window of the first train ride. To highlight the seemingly subtle yet immensely cataclysmic changes that occurred throughout the year 1837, Werth is considering calling the book “Quiet Revolution”. The name “The Year Pushkin Died” is also a title candidate, but could be discarded because the reference may escape potential readers.

Professor of History at Columbia University Richard Wortman kicked off the feedback session by complimenting Werth’s idea of introducing the book with a chapter on Alexander II’s travels, but noted that this sort of “tour of the empire” was not the first of its kind. Nicholas I, Alexander’s father and predecessor, also embarked on a trip across Russia in his earlier years, and Wortman claimed that observing the motivations of those who designed the trip – Nicholas I’s mother Maria Feodorovna and the poet Vasily Zhukovsky – could prove useful for Werth’s research. The tradition of “touring empire” – learning about the institutions, the people and the religion – had already existed before Alexander’s journey. In a later comment, Werth addressed the parallel between the two trips, asserting that residents of the provinces were more eager to embrace Alexander Tsarevich than Nicholas I.

Columbia History Professor Catherine Evtuhov continued the conversation by noting that Nicholas I’s visits were often followed by massive changes to the regions, including city replannings, pointing to an overall tendency of these visits having profound socio-political consequences. Professor Evtuhov therefore stressed the importance for Werth to delineate these particular repercussions, and to not necessarily take the exalting rhetoric of the newspapers and correspondences at face value. Werth agreed with Evtuhov’s point, explaining that earlier Russian newspapers reports were designed with the intention of educating “people further down the line”, and are therefore evidently full of rapture. Professor Evtuhov also posed the question of what exactly is this “emerging Russia” that Werth posits, to which the author responded that both the emergence of railways and the showcasing of Glinka’s opera embody elements without which a modern Russia is inconceivable.

Towards the end of the discussion, Professor Werth recalled his presentation of the book earlier this year in St. Petersburg, where it received an overwhelmingly positive response on behalf of Russia’s representatives. The response may indicate, according to Werth, that his book and the accounts in it will ultimately juxtapose the accounts of foreign travelers of the time, such as Frenchman Augustín de Betancourt.