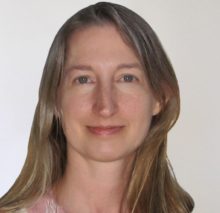 On April 18th, 2019, the Jordan Center hosted Professor Juliet Johnson of McGill University for her talk “Monumental Politics: The Power of Public Memory in Putin’s Russia.” Professor Johnson is Chair and Professor in the Department of Political Science at McGill University and Network Director of the Jean Monnet Network Between the EU and Russia, as well as the author of several books on politics of money and identity in post-communist Europe. Her latest research however, concerns the politicization of public monuments in contemporary Russia.

Professor Johnson’s interest in the topic of monuments peaked while she was working on her first book on Russian banking; during her time spent in Russia, Johnson was struck by the continual transformation of public space in Russia. In collaboration with a geographer, Johnson published a piece on the change of public space in Russia, which became her most cited work ever, indicating a widespread academic interest in the subject. Most recently, Professor Johnson has been working with a colleague from Moscow’s Higher School of Economics on newly erected and repurposed monuments under Putin’s presidency. Johnson’s research begins with Kubinka’s Patriot Park, where a model of the Reichstag has been built for the purpose of orchestrating an annual reenactment of the building’s Soviet siege. The siege is enacted by the Russian Youth Army, a nonprofit organization funded by the Kremlin and initiated by Russia’s Minister of Defense Sergey Shougy. The Patriot Park is one of several examples of how the Russian government is attempting to infuse public spaces with sentiments of Russia’s historic victories.

The contemporary revival and politicization of Russia’s history begins with references to the glories of Kievan Rus, and progresses onwards through Soviet history. After the fall of the Soviet Union, Johnson argued, Russia was left with an identity crisis caused by the vacancy of Soviet ideology. The Russian state therefore looked towards public space, as “control of symbolic public spaces was always very important.” Under Yeltsin and the emergence of Russia’s nascent democracy, Russia needed to create new civic symbols and traditions; but the attempts, according to Johnson, were “half-hearted.” Yeltsin’s failure to muster support for a day that commemorates Russia’s post-Soviet statehood, later codified by Vladimir Putin and renamed to Russia Day, is one of several examples of of Yeltsin’s inability to establish civic traditions. “With a lack of a democratic past,” argued Johnson, such a task was nearly impossible. President Vladimir Putin’s Russia attempted to define national identity in terms of the state. Professor Johnson laid out three historical moments – the Great Patriotic War, the Stalinist repression, and the Russian Revolution – that Putin’s Russia has attempted to symbolically appropriate into their own terms. The most unprecedented component of this contemporary politicization, is that these themes are becoming infused with Russian Orthodoxy.

Professor Johnson segued the talk into describing how the three historical moments have been redefined after the Soviet collapse, beginning with the Great Patriotic War. Under Nikita Khrushchev, the Soviet Union dispelled a sense of patriotic pride over the war. But after the Soviet Union collapsed, President Boris Yeltsin sought to “shore up legitimacy by repurposing the narrative of the war,” calling for a commemoration of the event through public memorials such as the statue of Marshal Zhukov and the renovation of the formerly abandoned Victory Park in Moscow. May 9th Victory Day was framed as a victory for the Russian people, rather than for the Soviets, and strung together with religious elements like the statue of St. George slaying the Nazi dragon. The Defenders of the Russian Land Memorial that was built in Moscow’s Victory Park depicts ancient Czar-era soldiers next a modern Russian soldier, while the flowers below spell out Rus, evoking a certain historical continuity.

Vladimir Putin continued to put Victory Day in the spotlight, but unlike his predecessor, he didn’t try to dissociate the holiday from its Soviet roots. Under Putin’s presidency, a bust of Joseph Stalin was unveiled in Victory Park; and although Professor Johnson stressed that it’s a common mischaracterization to claim that “Stalin has made a return” in modern Russia, there has been a large increase of depictions of the Soviet dictator in recent years. The inscription of Volgograd was renamed to Stalingrad outside the Tomb of the Unknown Soldier, and in 2008, military parades were reimplemented in the Red Square. Victory Day celebrations are now marked by the ribbon of St. George. In 2015, a grassroots movement gave birth to the Immortal Regiment ceremony – one of the many grassroots initiatives that would soon be co-opted by the state. But this appropriation of the war is also happening simultaneously with historical interpretation of the Soviets’ victory in the Great Patriotic War becoming problematic in other parts of the world, with both Ukraine and the Baltic Countries removing statues that depict the Soviet forces as “liberators.”

Unlike with Victory Day, memorials for Stalinist repressions are significantly less pompous. Aside from replacing the statue of Dzerzhinsky with the Solovetsky Stone, Yeltsin’s cabinet took little action to commemorate the tragedies of Stalinism; memories of the period were instead “shelved, and eventually festered.” Under Putin’s presidency, the state declared a national Day of Remembrance for Victims of Political Repression. A grassroots, “reading of the names of victims” ceremony began to take place beside the Solovetsky stone, which the authorities quickly co-opted by forcing the participants to move the ritual to an official Wall of Grief memorial. At the opening ceremony of the Wall of Grief, Patriarch Kirill was present, indicating a merging of church and state. And in spite of this inauguration of an official Wall of Grief, the authorities continue to crackdown on the historical and civil rights organization Memorial, which focuses its research on illuminating the Soviet Union’s totalitarian past. The message here, according to Professor Johnson, is that only the state has the power to define Russia’s history.

Of all three events, the legacy of the Russian Revolution remains the most muddled. The year 1917 was a divisive memory during Yeltsin’s presidency, embodied in the president’s failed attempt at removing the Lenin Mausoleum. For Putin, the idea of a revolution provokes anxieties about tangible revolutions such as the Color Revolution and Euromaidan. According to Levada Center polls, Russian citizens are least interested in the revolution in contrast to other historical events, making the task of acknowledging it, without exalting it, all the easier for the state. Professor Johnson cited several television programs leading up to the centennial of the event that were deliberately making “commemoration an academic exercise” – the more academicized the event is, the less politicized it can become.

Professor Johnson devoted the final segment of her talk to the newly-revamped VDNKH Park, which embodies the monumental politics of contemporary Russia. The park was initially constructed in the Soviet Union to honor the state’s economic achievements, but it fell into complete disrepair under Boris Yeltsin. With the help of Mayor Sobyanin, Vladimir Putin rediscovered the park, and restored it back to “its old purpose with a real nostalgic twist; connecting it to a lost world, without necessarily replicating it.” Emboldening Soviet slogans have been replaced with their contemporary analogs such as, “Today construction, tomorrow history!”; or, “Russia – my history.” Beyond VDNKH’s restoration, the state continues to erect patriotic monuments across the country that contextualize its own political ambitions, from the St. Vladimir statue in front of the Kremlin, to an Alexander the III statue in Crimea. Meanwhile, real civic monuments, like the makeshift memorials for the slain opposition politician Boris Nemtsov, continue to get swept away.