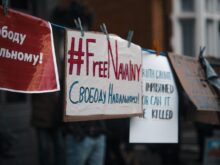 On February 1st, the Jordan Center and the Harriman Institute co-hosted a panel on Alexei Navalny as part of the New York–Russia Public Policy Series. Panelists included Yana Gorokhovskaia, Research Fellow at the Institute of Modern Russia; Pjotr Sauer, Journalist at the Moscow Times; Gulnaz Sharafutdinova, Reader in Russian Politics at King’s College London; and Aleksandra Urman, Postdoctoral researcher at the Institute of Communication and Media Studies, University of Bern. Stream it here.

Moderators Joshua Tucker, Director of the Jordan Center, and Alexander Cooley, Director of the Harriman Institute at Columbia University, opened the panel by presenting the speakers. They briefly introduced the nation-wide protests that transpired in Russia over the two weeks prior to the date of the panel, making this virtual gathering truly an “emergency session.”

Yana Gorokhovskaia started by highlighting the regime’s unprecedented reaction to the popular protests that escalated in the past 10 days across the nation. Specifically, Gorokhovskaia cited the state’s denying of protest permits, arresting potential protest leaders, retaliating teachers, employees, and university staff for attending protests, and spreading propaganda about the protest’s liaisons with foreign powers. The sheer fact that the Moscow metro was shut down for the first time since the encroachment of the German army in 1941 suggests that the protests posed a serious threat to the regime. Gorokhovskaia insisted, however, that the abrupt transpiring of these protests ought to be contextualized in the regime’s recent series of repression and power consolidation.

“Over the last couple of years, the Kremlin has taken a very aggressive line towards Russia’s civil society, precipitating what has happened to Navalny more recently,” said Gorokhovskaia, enumerating the recent expansion of foreign agents law to foreign media and individuals, the restriction of people’s right to assembly or participate in unsanctioned rallies, the adjustment to presidential term limits, and the subjugation of judiciary institutions under state authorities.

While believing that political scientists shouldn’t attempt to predict the future, Gorokhovskaia expressed concerns over Putin’s powerful alliances with both Russian elites and security forces but thought optimistically of the long-lasting political possibilities that the protests already brought to the country.

Pjotr Sauer further elaborated on Navalny’s rising popularity among youth and entrepreneurs, the impressive scale and intensity of the protests, and the demographics of the protesters. Despite being downplayed by the regime and ranked low in the previous presidential election polls, Navalny was nominated as the nation’s person of the year among the age group between 18 and 24. His dramatic poisoning and return to Russia also only served to increase his recognition and approval. Transitioning to to comment on the unsanctioned nature of the recent protests, Sauer emphasized the protesters’ resistance to police forces. “They were more aggressive, more desperate for change, and less scared, even though the authorities clamped down hard or even harder than in 2019,” said Sauer. The crowds of protesters are newer to politics and more diversified, the majority of whom were joining the protests for their first time and participating in the provinces, like Vladivostok and Kazan. Even everyday life was transformed, as one couldn’t walk the street without knowing what’s happening, since the central streets were blocked in entirety.

Gulnaz Sharafutdinova expanded on the analysis and focused on a societal level. Citing a popular comparison of Navalny as someone who “put his head in the jaws of the lion and started poking the lion at the same time,” Sharafutdinova defined Navalny’s return and making of the viral YouTube documentary about Putin’s alleged palace as a new political moment in Russia. “Over 100 million people were watching it, and a lot of [them] obviously learned a lot of new things… It was a big slap on the face of the Kremlin’s leadership.” Meanwhile, Sharafutdinova identified deeper and more structural social problems that also culminated in the mass grievances against the regime: economic stagnation, growing inequality, the impunity of state authorities, and the mishandling of the pandemic. Navalny, albeit known for his past controversial views on immigration and nationalism, emerged as the only alternative to Putin. “If there is one focal point around which protests against the regime can consolidate, it is Navalny,” said Sharafutdinova, “and from that perspective, Navalny’s leadership in the political spectrum in Russia has […] acquired a qualitatively new stage.” Thus the slogan, one for all, and all for one, as 170 cities across the country became sites of protests as of January 23. Sharafutdinova then pointed out a source of pessimism, manifested in the Kremlin’s overconfidence in detaining the protesters and repressing nonviolent political activity.

Aleksandra Urman offered a refreshing, quantitative analysis of the politicization of TikTok. Echoing Sharafutdinova’s statistics that 70% of the protesters were under the age of 35, Urman agreed with the integral role that social media played in mass mobilization but went on to cast doubt on the sustainability of social media activism. “What we have seen on TikTok is not a sustained mobilization or sustained politicization but more of a short-lived hype,” said Urman, referring to the steady decrease of hashtags with Navalny after the protest of January 23. Moreover, Urman highlighted the spike in allegedly paid-for, pro-Putin TikTok content that surpassed the popularity of pro-Navalny counterparts, expressing the concerns of commercial activities and manipulation behind the seemingly organic cultural trends. The topics of these trends ranged from Navalny’s endurance of the Russian authorities, high schoolers’ taking-down of Putin portraits, Navalny and Yulia Navalnaya as a power couple, to, of course, the palace itself, after the release of the documentary. According to Urman, the takeaway is that it was unclear when or how the Roskomnadzor interfered to require TikTok to remove and adjust contents. But it is evident from the API analysis that the content that gained the most views quickly turned private, indicating the level of self-censorship among the pro-Navalny social media users.

During the Q&A, questions were raised about the role of social media in generating social uprisings. Specifically, do social media platforms serve as an independent variable in driving social patterns, or do they only passively reflect the existing popular sentiments? After a vibrant open discussion, the panelists suggested that the answer is a little bit of both, further warning against the popular optimism attributed to the politicization of TikTok. Telegram was brought up as a more sustainable counterpart that successfully mediated the communications of many spontaneous actions on the ground.