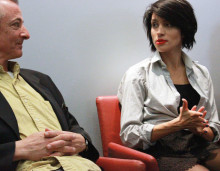 Nadya Tolokonnikova has occupied yet another church. The building in question, in New York’s uber-gentrified neighborhood of Williamsburg, has been repurposed for private use and is the Pussy Riot member’s abode of choice during her visit to the city. This time, no one will ask her to leave or accuse her of “hooliganism motivated by religious hatred.”

Almost four years have passed since Tolokonnikova was arrested after staging the punk rock performance “Punk Prayer – Mother of God, Chase Putin Away!” in Moscow’s Cathedral of Christ the Savior. Today, after facing an extremely public trial, being celebrated as the beautiful face of the Russian opposition, going to prison and deciding to campaign for prisoners’ rights, she is a different person. “A rock star,” as Elayne Tobin, a professor in liberal studies at New York University, calls her during a talk in New York University’s Hemmerdinger Hall on April 13. As Tolokonnikova hears those flattering words, she shakes her head and looks away. But Tobin has good reason to think of her in those terms. The activist looks effortlessly cool with her sleek haircut. Her nude lipstick makes her plump lower lip look even bigger. “Fucking” is her favorite adjective. She was born on November 6, the day of the Russian revolution. She endorsed Democratic candidate Bernie Sanders, and he retweeted her.

During her talk, Tolokonnikova speaks about the two years she spent in a Russian jail before her release in December 2013. “By law you could wash your hair and your whole body just once per week,” she recalls. If she had had the option, she says, she would have definitely preferred an Orange Is The New Black-style prison. Instead, she spent her time in a Russian prison, shocking the guards with her Bible reading sessions. She loves Jesus, she says. He was able to turn water into wine, and that is all that matters.

Tolokonnikova knows what her audience wants and is happy to perform to their expectations. But there is a depth to her that transpires at the most unexpected moments. It comes through when she talks about how her perspective as an artist changed following Russia’s military intervention in Ukraine. “A lot of people died, hundreds of people,” she says. “And you were just silent, you couldn’t do anything.” Back when activists like her still thought they could get rid of Russian President Vladimir Putin, the mood was that of a carnival. Now it’s not like that anymore. Today, her Pussy Riot videos are a little darker. They talk about corruption and dismay. The colorful balaclavas have been swapped out for grey shades and sinister tones.

Even though Tolokonnikova’s work is now mostly focused on prison reform, Putin remains very much on her mind. “I have never found him sexually attractive; maybe there is something wrong with him,” she says. He cannot be gay because he is too bad to be gay. She knows plenty of gay people, and it would be an abomination for them if Putin were gay. “He is just a stupid heterosexual.” Fucking Putin has ruined the country, he jails people and takes away their rights.

Scholars in Russian and Slavic studies normally have little tolerance for those who equate Putin with the source of all of Russia’s evils. But in presence of her majesty Tolokonnikova, all bets are off and all mouths are shut. Such is the power of this velvet-clad goddess in electric blue nail polish.

The morning after, a smaller group of people gather around her at the NYU Jordan Center for the Advanced Study of Russia for an informal conversation. This time her lipstick is bright orange, and everyone is close enough to notice that her nail polish is chipped. Two green streaks of hair are poking off her dark mane. She speaks about anonymity and celebrity, the increasingly nationalistic mentality pervading Russia and Judith Butler.

Then, the topic of Putin comes up again. Does she really believe that he is all that is wrong with Russia today? At that moment, Tolokonnikova reminds you once again that her message is tailored to her audience. She is a performance artist, after all. When people in the West think of Russia, they think of Putin. Maybe Tolstoy and Dostoevsky. When she talks to people in the West, she feels the need to conform to that language. But personally she sees Putin as a synecdoche for the whole country.

At the end, the verdict appears unanimous among the audience. She might be cool and outrageous, but there is a certain depth beneath the glossy surface. In one corner of the room, Tolokonnikova politely obliges to selfie requests and signs posters. “No Pussy, No Riot,” one reads. People continue to chatter enthusiastically. By then she has already slipped away unnoticed, as only a rock star would know how to do.