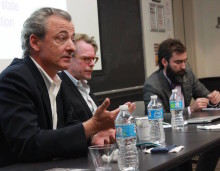 On May 4, 2016, the NYU Jordan Center for the Advanced Study of Russia and the NYU Russian Club held a panel discussion entitled “Beyond Political Games,” dedicated to the Russian-Ukrainian conflict from the historic and cultural point of view. Panelists included Yanni Kotsonis, Director of the Jordan Center, Lucan Way, Associate Professor of Political Science at the University of Toronto, and Peter Zalmayev, Director of the Eurasia Democracy Initiative. The panel was introduced by Rossen Djagalov, Assistant Professor of Russian and Slavic Studies at NYU. “In my experience, [this is a topic] that doesn’t really encourage meaningful dialogue for the most part, which is precisely why it’s important,” Djagalov said.

Following the introduction, each panelist presented a brief summary of their position on the conflict. Peter Zalmayev began, providing a historical outline of Russian-Ukrainian relations. “The fundamental issue we need to understand as we approach the history of Russia-Ukraine relations […] is that Russian political elites, have never been able to come to terms with the very entity – the very polity – of Ukraine as fully separate, fully autonomous, fully independent agent,” he said. This denial, coupled with Russian territorialism and historical revisionism, has encroached on Ukrainian borders, ethnicity, and language. But to Zalmayev, Ukraine is just one victim of Russia’s imperial project, which has set up puppet presidents like Alexander Lukashenko of Belarus and claimed territory in former parts of the Soviet Union, including Transnistria, Abkhazia, Nagorno-Karabakh, Crimea and most recently, the Donbass.

Zalmayev not only drew attention to historical divisions and corruption within Ukraine, but also pointed to Russian propaganda’s role in driving a wedge between the two nations in order to understand the conflict. “The reality of Euromaidan has been diluted by nationalism, jingoism and Russophobia,” he said, “[but] Ukraine is still a democracy, however imperfect as it may be, while Russia under Vladimir Putin has modeled its governance after Pinochet’s Chile.” Looking beyond the conflict, Zalmayev said that he does not think Ukraine will fall under Russian jurisdiction. “Instead I think Ukraine will remain where it’s always been – and that is the ‘Gates of Europe,’” he said, citing a book bearing the same title by historian Serhii Plokhii.

Following Zalmayev, Lucan Way spoke from the domestic Ukrainian perspective about Euromaidan in order to understand the puzzle of “why something like this – as Peter mentioned, a very spontaneous, initially peaceful protest against autocracy – rapidly turned into a war between Russia and Ukraine.” A highly polarizing conflict, Way summarized two versions of the story. “The Russian version is farther from the truth,” he said, emphasizing that there was no initial discrimination against Russia in Ukraine, that the post-Yanukovych government was moderate, and that the Russian military aggression was unprovoked. The Ukrainian narrative, however, is problematic because it states that the population was united behind Europeanization and sees Russia as inherently expansionist. Looking beyond these two versions of history, Way said that today’s conflict began due to Russian expansionism under Putin that saw the breakdown of the Ukrainian state after the Euromaidan Revolution as a window of opportunity to invade.

The final panelist, Yanni Kotsonis, broadened the scope of the conversation beyond Ukraine and Russia to place the conflict in a global context. “What I really care about as a historian is to try to figure out how our conversations came to be what they are now,” Kotsonis said. “Why do we keep using almost primordial definitions of each other when we’re talking about Ukrainians and Russians?” Kotsonis presented a new perspective on the situation, underscoring that a social crisis unites Ukraine and Russia with the rest of the world. “I put it to you that we’ve made the usual mistake of looking at Russia and Ukraine as regional questions with their own histories. If you look at the grand scheme of things, these countries were born into a particular historical moment which the whole world was sharing,” he said.

Both Ukraine and Russia are faced with a decline in the standard of living, insecurity, corrupt governments, a severe concentration of wealth in the hands of a few and high rates of unemployment. To Kotsonis, what is happening in Ukraine today is the consequence of these social issues, which caused Ukraine to seek alignment with Europe and Russia to regain its geopolitical holds. Still, the divisive terms that permeate Russian and Ukrainian news outlets are picked up in the West, reinforcing a sharp and polarizing language of oppositions. “History is not an objective science. It’s a humanistic endeavor,” Kotsonis concluded. “And it’s that humanistic part that is sort of lacking in these conversations [about Russia and Ukraine].”

In the Q&A session that followed, questions were asked to solidify various elements of the Russian-Ukrainian conflict. The panelists touched upon the issues of conspiracy theories, the ambiguity of state borders, anti-Semitism and the legacy of communism and World War II in Eastern Europe.

Other questions highlighted the role of the United States in Euromaidan and the ongoing conflict. “It’s true that the US has provided funding of NGOs and also for free and fair elections [in Ukraine], but that is very different than saying that they somehow orchestrated the revolution,” Way said. “And furthermore, the NGOs were not responsible for bringing hundreds of thousands of people onto the streets,” he said, recognizing the Euromaidan Revolution as a social justice movement, before it became more nationalized in retaliation against Russia’s annexation of Crimea and the occupation of the Donbas. Both Kotsonis and Way agreed that the behavior of the United States was misleading during the Ukrainian revolution, referring to Assistant Secretary of State for European Affairs Victoria Nuland, who handed out cookies on the Maidan, and pro-Ukrainian statements made by U.S. President Barack Obama. “I don’t think [the US] played an active role [in Ukrainian politics], but I think there was this perception that they allowed to stand,” Kotsonis said. What’s more, today the U.S. Department of State disseminates misinformation. “There was this wrong perception that Euromaidan represented Ukraine,” Way said, when in fact, Ukraine was and remains divided on its stance towards Europe.