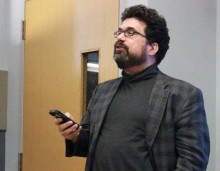 Watch the video of Panel 3 here

Watch the video of the event Keynote here

On April 8, 2016, the NYU Jordan Center for the Advanced Study of Russia hosted a conference entitled “Radiant Futures: Russian Fantasy and Science Fiction.” The conference was convened by Eliot Borenstein, Professor of Russian and Slavic Studies and Collegiate Professor at New York University, and it featured a varied lineup of speakers from the literary field. In his introduction, Borenstein said that the idea behind the conference was to gather a group of people who have been thinking about nauchnaya fantastika (scientific fantasy) from a scholarly and non-scholarly perspective, particularly given the peripheral role this genre usually plays in the academic context. Borenstein invited the participants to engage with notions of genre and address how nauchnaya fantastika relates to wider cultural landscapes. “We’re looking at a genre that developed not in isolation to American science fiction, but not exactly in a dialogue either.”

The first panel, titled “Transnational Fantasies: Fandom, Translation, Genre,” featured Yvonne Howell from University of Richmond, Sibelan Forrester from Swarthmore College, Mark Lipovetsky from University of Colorado – Boulder and Borenstein. Howell discussed the main findings of her paper “The Science Fictionality of Russian Culture,” in which she highlighted the “science fictional” paradigm inherent to 20th-century Russian cultural and historical trends, as seen in their utopian undercurrents and projections into distant temporal dimensions. Forrester, who presented a paper titled “Naming the Future: How Nationality in Soviet and East European Science Fiction Translates into English,” tackled the significance of names in translated texts of Soviet science fiction, while Lipovetsky’s paper, “A Trope for Modernization/Colonization?: Rewriting the Progressor Narrative in Post-Soviet science Fiction,” talked about the figure of the “progressor” in the Strugatsky brothers’ work and its influence in post-Soviet science fiction. Finally, Borenstein related the creative appropriation of characters from J. R. R. Toilken’s The Lord of the Rings in the context of growing anti-Western rhetoric in a presentation based on his paper “Russian Orc: The Evil Empire Strikes Back.”

The second panel was entirely devoted to the Strugatsky Brothers, and featured Maya Vinokur from University of Pennsylvania, Amanda Lerner from Yale University and Tony Anemone from The New School. Vinokur directed the audience’s attention towards the field of pedagogy as an area of scholarly investigation, in her presentation “The Pedagogy of Disaster: On the Educational Philosophy of the Strugatsky Brothers.” In her paper, Vinokur discussed the role of trauma and disaster in the process of self-realization, seen in works such as Roadside Picnic, Hard to Be a God and The Ugly Swans. Subsequently, Lerner shifted the focus to space travel as a narrative device with a presentation on “Expanding Empire into the Stars: Colonization in Polden,’ XXII vek.” Focusing on Soviet space colonization, she showed how space explorations formed connections with utopian goals and revealed anxieties about the future. In the conclusive segment, Anemone looked at screen adaptations of Strugatsky Brothers’ literary works and how they obscured and emphasized the literary themes of the original works.

The third and final panel, titled “After the Future: Post-Soviet Science Fiction,” moved the conversation from the Soviet era to post-Soviet period. Jacob Emery from Indiana University, Dina Khapaeva from Georgia Tech, Sofya Khagi from University of Michigan and Helena Goscilo from Ohio State University were called to comment on the state and forms of science fiction in the post-Soviet space. Emery relayed the main points of his paper, “Broadcasting Psychic Potential: Romantic Aesthetics and Cybernetic Fiction.” In the talk, he explored the figure of the clone and the significance of the clone trope as a way of approaching the theme of proliferation of the self over time. Khapaeva’s presentation, “Fantasizing Russia’s Future: Slavery in Post-Soviet Fiction and Beyond,” investigated the crossroad of two major themes: aesthetics and the social world of contemporary Russia. Khapaeva noted the recurring theme of upcoming serfdom in utopian and dystopian novels structured around the idea of a Russian empire. Further, Khagi’s presentation, “Butterflies in Sunflower Oil: Alternative History in Victor Pelevin’s Oeuvre” looked at the works  of authors such as Pelevin, Vladimir Sorokin and Dmitry Bykov to study the use of alternative history as a subgenre of science history.

Concluding the conference was Goscilo’s presentation, “Taxonomy and Its Discontents and Contents, or: When is Sci-fi not Sci-fi?,” which investigated the shortcomings of taxonomy in providing functional categories to study science fiction and fantasy. In her presentation, Goscilo touched on morality, past and future spaces, as well as scientific and magical dimensions among different literary models within the field of science fiction. In doing so, she highlighted the broader importance of engaging in academic discussion in order to problematize and propose possible solutions to the main issues surrounding academic subjects under question.