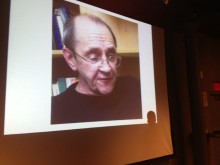 Last Friday, the Jordan Center had the honor of collaborating with The Ugly Duckling Presse and NYU’s Eugene Ostashevsky in holding an event for the late Arkadii Dragomoshchenko. Arkadii, an experimental poet, essayist, and translator was not only known for his writing but also his compassion, and, as related by Mikhail Iossel, his courage. As he was influential within both Russian and American contemporary literature, his death has been felt on a global scale.

The evening began with a showing of Jacki Ochs’ documentary film that focused on Arkadii’s friendship with the American poet Lyn Hejinian. Lyn, who later spoke, compared her relationship with Arkadii to that of Dante and Virgil in the Divine Comedy. As well as recounting her close friendship with Dragomoshchenko, Lyn captured the essence of his poetry, remarking that he “discovered language’s unconscious” and that he seemed to “follow language into its dreams”. Among the other participants were Genya Turovskaya, friend of Arkadii’s and a translator of his works, Charles Bernstein, poet and professor at the University of Pennsylvania, and Matvei Yankelevich, editor and creator of the Ugly Ducking Presse. While the participants read Arkadii’s poems and shared personal stories, a slideshow played in the backdrop, featuring images of Arkadii ranging from his early childhood up to his death.

Although the evening was unquestionably melancholic (the coincidence of Arkadii’s latest work being entitled Endarkenment was noted by more than one person) it closed with a drink and the promise that Arkadii’s work has and will continue to enrich us all.

For images from the event click here or on the image.