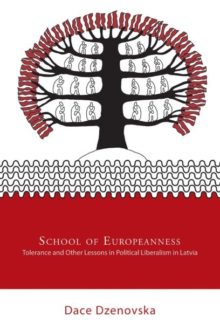 On April 16, 2019, the Jordan Center welcomed anthropologist Dr. Dace Dzenovska of the University of Oxford, who spoke about her 2018 book, School of Europeanness: Tolerance and Other Lessons in Political Liberalism in Latvia. Dr. Dzenovska is Associate Professor of the Anthropology of Migration at the University of Oxford; her work concerns migration in the context of European Union enlargement, as well as the promotion of tolerance in post-Soviet nations. The talk, as part of the Occasional Series, was introduced by Anne Lounsbery, Department Chair and Associate Professor of Russian and Slavic Studies at NYU.

In the wake of rising populist illiberalism, scholars are beginning to reflect on political liberalism’s failures in Europe, including in the Eastern European countries that have entered the European sphere over the past two decades. It is often argued, Dzenovska explained, that Eastern Europeans “have learned how to become culturally liberal, but are failing in political liberalism.” Neoliberalism as an economic practice faces scrutiny for having subjected post-Soviet states to shock therapy and is widely seen as ill-equipped to cope with globalization’s negative consequences (such as poverty and inequality). But political liberalism, unlike its economic counterpart, has largely been immune to critique and is often represented as “the highest form of government”—at least by a particular historical community. Citing scholars who discuss liberalism’s tendency toward dogmatism, Dzenovska argued that this version of liberalism can function as a missionary project in Eastern Europe—a hegemonic “ideology of power” or “hyper liberalism” that seeks to rid nations of alternative worldviews by limiting free speech.

The Baltic countries, having entered into security allegiances that situate them firmly within the international order, are not experiencing the same drastic rise in populism that is apparent elsewhere in Eastern Europe. Nevertheless, Western European institutions tend to judge the Baltics for falling short in terms of certain measurements of liberalism, most notably political tolerance and openness towards the “other.” Liberalism’s paradoxes are abundantly evident in a nation like Latvia. Economically, Latvians have established themselves as post-Soviet capitalists. But political liberalism has progressed at a much slower place, as Latvians aim to protect their collective sense of self while also preserving their newly acquired individual liberties. As Latvia has moved towards Europeanization in the post-Soviet period, the country has faced a set of somewhat contradictory demands from European institutions: it has been expected to “draw a variety of boundaries around liberal democratic states and policies, while at the same time emphasizing the virtues of inclusion openness and tolerance.”

In 2005, the Latvian state initiated a program aimed at “inculcating tolerance into the hearts and minds of individuals.” When Dzenovska was studying this complex process, many of her interlocutors were tolerance workers–NGO employees, activists, and civil servants, both Latvian natives and Latvian national minorities—who sought to promote tolerance as a political virtue. These attempts often led to clashes of perceptions, manifested most strongly in debates about the modern Latvian language. What to do, for example, with words that had been banned in Soviet discourse, such as the derogatory “Zhid” (Jew)—were they to be “un-banned” in the interest of freedom of speech? Liberal tolerance workers failed to find a common tongue with Soviet-era Latvians, who were reminded of Stalinist-era policing of language. From the point of view of the tolerance workers, these Latvians showed themselves incapable of making the leap from “censorship understood as external and immoral, to censorship understood as internal and virtuous; or from censorship to self-control.”

Dzenovska also noted the paradoxes of political liberalism that are evident in Latvia’s border policy. In the post-Soviet era, Latvian border guards have been required to “securitize” the border—a term used by the European Union to mean “make the border impenetrable for unwanted goods and people, while observing human rights of border crossers.” Thus their charge is both to keep out unwanted elements and to preserve human rights (thereby “civilizing the border”). The guards Denezovska interviewed were befuddled by this combination of demands, which struck them as irreconcilable. She recalled an incident that occurred in 2005, when the appearance of seven undocumented Somalis at the Latvian border sent confusion through the authorities. Rather than attend to these migrants, the border guards prioritized former citizens of Soviets nations (who had never left Latvia but needed to sort out their documents in the immigrant detention centers). A human rights organization intervened, accusing the border guards of prejudice and negligence and stressing that the Somali asylum seekers should not receive second-class treatment. In return, the guards became convinced that the human rights organization was “out to get” the civil servants. Denezovska linked this incident to the fact that Latvia has yet to agree on precisely what facets of Europeanization should be embraced.

Requiring Latvians to admit migrants from countries affected by Western European colonialism was intended to encourage identification with a particular narrative of European history by “reflecting on present and past blemishes”—that is, the dark, shameful history of colonialism and empire. However, it turned out that some Latvians were quite enthusiastic about embracing this history and this facet of European identity, welcoming the opportunity to take pride in their role as colonizers (as they had not been able to do in the Soviet era)—not at all what was intended by the tolerance workers!

Dzenovska’s exploration of such paradoxes sheds light on how post-Soviet liberalism could come to function as an ideology of power. Even more significantly, it clarifies the relationship between post-Cold War liberalization projects and the crisis that is now facing political liberalism throughout Europe, where the tension between exclusive polities and inclusive values remains unresolved.