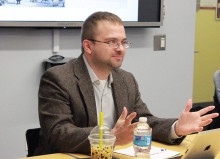 On February 5, 2016, the NYU Jordan Center for the Advanced Study of Russia welcomed Sergei Antonov for a colloquium on “Criminal Capitalism in Imperial Russia: Counterfeiters, Merchants, and Gendarmes.” Antonov, an Affiliated Scholar in the History Department at Queens College, CUNY, was introduced by Anne O’Donnell, Assistant Professor of History, Russian & Slavic Studies at NYU. The discussion focused on a paper that will serve as a portion of Antonov’s forthcoming book on the history of personal credit in Imperial Russia, seeking to establish larger connections between criminality, law and capitalism in 19th-century Russia.

Antonov opened his presentation with a description of his methodology and broader project goals. The historian said that during his research he was struck by the pervasiveness of crime in the culture of private property and private credit in 19th-century Russia. In the archives, Antonov found that counterfeit material was so ubiquitous that “even people perfectly law-abiding would have to deal with criminal justice” and that, often times, even the state was culpable.

The historian’s paper explored how counterfeiters practiced their trade between the years of 1826-1879 and the challenges gendarmes faced in bringing these crimes to justice. “The 19th century,” he said, “was ‘the Golden Age’ of counterfeiting, that allowed private actors and private criminals […] to have a chance at this practice.” As Europe experienced a transition from coinage to paper money in the 1800s, forgeries were made easier to the layperson. Whereas coins could be shaved or adulterated, paper money could be reproduced from scratch, and the simple design of the first Russian paper notes facilitated the process of counterfeiting.

Antonov highlighted three distinct forms of counterfeiting he identified through his research: transnational, communal and artisanal. Firstly, he explained that the 19th-century transnational system enabled the creation of a forgery network. Although Europe was divided by borders in the 1800s, the boundaries between nation-states remained relatively open to smugglers. Thus, counterfeit money was able to travel smoothly through established channels of trade and imported into the Russian empire. Shrewd businessmen, the counterfeiters not only used these established networks, “but they weaved themselves into completely legitimate commercial patterns,” Antonov said. Further legitimizing this transnational network was the widespread belief that paper money was fraudulent when it was first introduced into the commercial world.

Counterfeiting was also made possible by the fact that 19th-century society was still largely built on communal ties that created a buffer against state intervention. In some places, like the district of Guslitsy, counterfeiting became a local industry. Lying 60 miles from Moscow, Guslitsy was remote enough to be inaccessible to the government, but close enough to the metropolis to reap the benefits of forging paper notes. The counterfeiting industry also blossomed in prisons and small artisanal groups in villages.

Over time, the state became more effective in quelling these criminal activities, but the 1800s were an in-between period during which the government did not always have the upper hand, Antonov explained. While 19th-century Europeans believed that “old corruption” had been destroyed, the “new era of clean business” never appeared, which fostered anxiety across the continent.

Seeking to connect his presentation to the wider concept of criminal capitalism, Antonov asked the audience to contribute ideas regarding the framework of his paper. Anne O’Donnell recommended that Antonov broaden the scope of his presentation. “The story you’re telling is familiar,” she said. “The challenge, then – for us as Russianists – is what makes Russia distinctive?” She encouraged Antonov to shift the focus of his paper from the narrow subject of counterfeiting to the broader issue of unreliability. Subsequently, Yanni Kotsonis, Director of the Jordan Center, probed Antonov on what made the 19th century a unique period in the history of counterfeiting.

In response, Antonov pointed to distinctions in the Russian historical narrative that separated it from that of Europe and the West. He mentioned that in the United States, during the same period, state boundaries were more perspicuous than those in Europe and that after the American Civil War, governmental authority became much stronger. He also localized his narrative in the 1800s, explaining that the counterfeiting practices used in Russia employed “legal forms and organization patterns associated with 19th-century capitalism,” which had not been available beforehand.

Other questions focused on whether or not counterfeiting was mentioned in the journals or newspapers of the period, how these crimes were investigated and conceptualized by the Russian justice system, and what role the introduction of the gold standard could play in the author’s narrative.