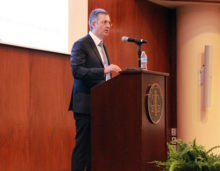 On October 4, 2016, the NYU Jordan Center for the Advanced Study of Russia Director Joshua A. Tucker welcomed Sergei Guriev, Chief Economist of the European Bank for Reconstruction and Development (EBRD), for the 2016 Jordan Center Distinguished Lecture. The Jordan Center Annual Distinguished Lecture brings a distinguished scholars on Russia to create, debate and spur discussion on the past, present and future of Russia in a global setting. This year’s guest spoke on “Transition from plan to market and its impact on well-being in Russia and other post-communist countries.”

Guriev then provided historical context. When communism collapsed, a process of transition began in over two dozen countries, affecting a population of over 400 million people. “This was, of course, a huge social and economic shock for all the people who were affected, but initially the idea was that the shock would be short-lived and problems would be resolved reasonably quickly,” Guriev said. In fact, while the GDP fell substantially, consumption did not drop very much, and started to recover almost immediately. From 1990-2014, “all countries eventually overcame transformational recession and started to grow,” Guriev said.

“However, if you ask any average Russian today, they will tell you about the horrible times of the 1990s,” Guriev said. Memories of this transitional period have played a large role in the formation of preferences for politicians who reject economic reforms. “In that sense, we want to see to what extent we can actually measure those pains of the early transition and to what extent these pains still have a persistent effect on what’s going on in those countries,” Guriev explained. “People growing up in recession or in crisis actually grow up differently, with different beliefs.”

Guriev went on to explain how macroeconomic data can help reconstruct the story of what happened 25 years ago at the end of the Soviet Union. One of the biggest problems for this type of research, he said, is that memories are unreliable. “If you actually ask people, ‘Was there more corruption or more trust or more life satisfaction 25 years ago?’ generally people will say 25 years ago, everything was better and people trusted each other.” When Guriev’s team at the EBRD started conducting surveys, they thought this answer provided evidence that people saw the Soviet system as generating trust—trust, which was now destroyed. “Maybe that is actually true,” he said, “but once you go to Turkey and ask same question, people will say the same thing. This recollection gap is the same in Turkey as it is in Russia.”

The speaker next shared the most recent data set from his team’s “Life in Transition Survey,” which looks at two age cohorts of people who remained in their home countries after the transition: those who were ages zero to two and those who experienced the transition during their “formative years”—the age span from 18 to 25 years when people craft their system of beliefs. Fifty one thousand households in 34 countries were surveyed, including those in the non-transition countries of Germany, Italy, Greece, Cyprus and Turkey, which act as comparators. The survey measured height and body mass index (BMI), as well as psychological characteristics like life satisfaction, trust and attitudes to redistribution, market and democracy. Gender, age, parental educational background and employment sector, country-specific time trends and rural versus urban environments were all controlled for in the analysis.

The data shows that today, those who were zero to two years old in the transition are shorter on average, which potentially points to hardship or deprivation they may have experienced during the period. However, the “transition happiness gap”—a term that encapsulates low levels of happiness in a population due to macroeconomic instability, deterioration of public goods, increase in inequality, and depreciation of human capital—has largely disappeared in former socialist countries, excluding those in Central Asia. Today, “If anything, [these cohorts are] actually are happier than their counterparts born before or after,” Guriev said. While the group shares the same income, employment and marital outcomes as their elders or juniors, they have better education, which explains part of the effect. The cohort is also slightly more supportive of democracy, although no significant differences in terms of trust or attitudes to redistribution and markets were measured.

Those who lived their formative years during the transition “should have a fossil or imprint of transition on their belief systems,” Guriev said. Nonetheless, the data collected found no effect of the transition on life satisfaction, trust, or beliefs regarding redistribution and inequality. Still, this cohort is slightly more supportive of capitalism and majority rule. “Probably this tells you that 25 years ago there was some excitement about markets and democracy,” Guriev hypothesized.

Guriev also mentioned that data from Russia plays a large role in the analysis. “The results we get for the whole transition region are actually driven by Russia,” he said; Guriev and his team want to take a closer look at data from Russia in the future. The country also provides an interesting case-study of what happens when recession hits after the transition period is over. “The past six years in Russia have not been great,” he said, attributing a decrease in happiness to income decline and economic downturn. “While other transition countries are now growing [in income and in happiness], Russia is now below the trend and moving away from the trend,” he said.

Overall, Guriev concluded, the “transition happiness gap” is finally closed after 25 years. This is not to say that transition did not affect those who lived it—“As a paleontologist can see what happened millions of years ago, […] we can see that the pain of transition was real and large,” he said. “It took very long, but this transition was a much bigger transformation than a labor market reform or a pension reform.” Speculating further, Guriev said that there might be a risk of a permanent effect on the political economy of transition countries. “In some of these countries you see that populist politicians have great power [and are] using this pain,” he said. To Guriev, this may destroy or prevent the formation of democratic institutions in the future.

In the Q&A session that followed, members of the audience asked Guriev to expand on the process of collecting data and its analysis. Kimberly Marten, Professor of Political Science at Barnard College and a faculty member of the School of International and Public Affairs at Columbia University, asked Guriev if the survey controlled for emigration, particularly for countries like Russia, which had a large outflow of the population after the end of the Soviet Union. “We don’t interview people who are no longer there,” Guriev responded. “The problem is that there is no good way to trace people who leave.” Looking at the historical perspective of Guriev’s data set, Jane Burbank, Professor of History at NYU, probed the speaker on how the years leading up to the transition might affect the analysis. “You defined transition as a moment of market reforms,” she said. “But some people might suggest that there was a transition going on in the Soviet Union in the last years of perestroika and that some of the economic hardships began then.”

Another query from the audience addressed how to define “happiness” and whether the survey could account for changing definitions of the term. “This is a question that is haunting this research,” Guriev said. “Height is an objective number [but] people have a system of reflection to readjust aspiration levels so they don’t stay unhappy forever.”  In addition, Rossen Djagalov, Assistant Professor of Russian and Slavic Studies at NYU, questioned the high levels of happiness that Guriev cited from his results. “The measurements do not systematically obscure the pain,” Djagalov said.

Bringing the conversation into the 21st century, one audience member was curious about levels of happiness in Russia today, where the happiness gap is increasing because of prolonged recessions, but the current regime retains an enigmatically high approval rating. “Research suggests that it is not about being happy, but it’s about comparing your happiness to potential happiness under alternative regimes,” Guriev said, nothing that he was working on exactly this topic in other ongoing research.