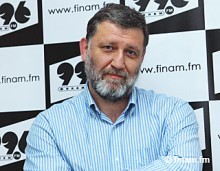 “What can Russians do to express themselves? Be political.”

Raising and answering this crucial question, Sergei Parkhomenko spoke this past Monday at the Jordan Center about the recent protest movement in Russia. According to Parkhomenko, Russia’s leadership has spent the past twelve years trying to dismantle the country’s political system. However, more and more Russians are coming to understand that politics is their business and that the struggle for rights belongs to them. Over the course of two hours, Parkhomenko addressed two main questions: what recent changes have led to this new atmosphere in Russia and how can this new atmosphere continue to thrive?

Parkhomenko explained the three “traumatic” events of this past winter and spring that led to the recent wave of protests. The first was the nomination of Vladimir Putin to the Presidency at the United Russia’s party congress on September 24, 2011; the second was the October 4th Duma election last fall, while the third and final event was the presidential election this past March. After the hijacking of these two recent elections, people in Russia began to feel that politics was their business. Even people who never intended on becoming involved in politics found themselves being pulled into political activity.

Such a person was Parkhomenko. He found himself involved in the protest movement unexpectedly. Before the events of this past winter and spring, Parkhomenko had chosen to quit his job as an editor at the popular science magazine Vokrug Sveta to pursue a career as an independent author. After these recent events, however, Parkhomenko was approached by his own children, who insisted that he pursue political involvement in Russia on their behalf. Now, says Parkhomenko, many Russian parents are carrying out the will of their children, who urge them to get involved.

As a result, more and more Russians are participating in protests. However, many believe that this participation is only temporary and only exists due to the “poverty of the political environment”. The hope remains that new politicians will emerge to take part in negotiations with the government.  For now, the biggest concern is how to keep it alive when so many believe their participation is only temporary. During the discussion, Parkhomenko insisted that the protest movement’s batteries were “running out and needed to be recharged”. But he makes it clear that the batteries have not run out yet.

Fatigue is exacerbated by the restricted means of public expression. Russians can either participate in legal action on the street, or march in illegal mass events, thereby risking arrest. They can sign open letters that will probably never be read. When an audience member asked about freedom of speech and the free press in Russia, Parkhomenko rephrased the problem as a matter of scale: “Are there tigers in New York? Yes. But they’re in the zoo.”  The state regulation of the media and the pervasive self-censorship of journalists leaves protesters no choice but to look to other media.  Hence the crucial role played by twitter, Vkontakte, and other forms of social media that link Russians’ daily lives with the larger questions of politics.

Parkhomenko argues that the manipulation of Russia’s electoral process has made it perfectly clear that the people are to be kept as far from politics as possible.  Why should Russians have democracy when they have Putin and Medvedev to figure it out for them? But in light of recent events, Parkhomenko notes that Russians have begun to talk back to their leaders: “We want to figure things out for ourselves.” It is Parkhomenko’s hope that the voice of the protesters will not fade. With no rational politicians to intercede on their behalf, he insists that it is up to everyday Russians to take on the burden of political action.

For Images of the event click on the image