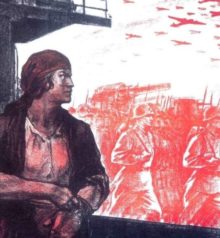 On April 23, 2019, the Jordan Center hosted Wendy Z. Goldman of Carnegie-Mellon University for a talk drawn from her forthcoming book, “Fortress Dark and Stern.  Life, Labor, and Loyalty on the Soviet Home Front during World War II (Oxford University Press).” Wendy Z. Goldman is the Paul Mellon Distinguished Professor of History at Carnegie-Mellon University, and has published numerous works on topics including labor, gender relations, and famine policy in the Soviet Union. The talk, as part of the Jordan Center occasional series and Elihu Rose Lectures in Modern Military History, was introduced by Brandon Schechter,  Elihu Rose Scholar in Modern Military History at NYU.

Professor Goldman began her talk by stating her intention to only speak about the topic of food from her much larger book about the Soviet WWII home front. According to Professor Goldman, the Soviet Union’s role in defeating fascism has largely been forgotten in the West, as the Cold War narrative erased the contribution of the Soviet Union in the struggle against fascism. Yet, an overwhelming majority of Hitler’s troops were concentrated on the Eastern Front, making it the largest military confrontation in history. The Soviet Union lost the largest numbers in the war, which estimate now to 15.6 percent of its prewar population. In comparison, the United States lost 0.32 percent of prewar population, while Germany lost about 8 percent. Large parts of the Soviet Union were occupied by the Germans, and almost 14 million civilians were killed through bombings or as a result of starvation. Two of the six million jews killed in WWII were killed on Soviet territory by the Nazis. The country entered a state of total war, and all resources were channeled towards defense, while no consumer items were being produced. There existed no heat for buildings or workplaces, which was especially crippling in a country where temperatures dropped far below zero for many months of the year. There was no soap, which for factory workers covered in coolants and oils, was unimaginable. But primarily, there was a very sharp drop in the food supply — the topic Professor Goldman devoted the remainder of her talk.

For several years after the war, starvation in the Soviet homefront was not discussed. Although the Brezhnev era built its identity around the victory over Nazism, historians in Russia and the West alike were in the dark about the full extent of starvation mortality, which was hidden by Soviet leaders in the official discourse, only to be unveiled after the archives opened. The German invasion of the Soviet Union occurred without diplomatic warning in 1939, and the Council for Evacuation was promptly formed. In addition to shipping out industry, the Council prioritized the evacuation of citizens, children, grain, cattle, and food processing factories. But the evacuations weren’t entirely successful, and the Soviets lost many resources to the Germans. Within a month of the invasion, Soviet leaders created a nationwide rationing system out of necessity. By late fall of 1941, all urban inhabitants and rural wage workers were guaranteed bread and sugar – bread was the most important part of the ration. While in the U.S. and Britain, rationing was limited to restriction, in the Soviet Union “rationing meant provisioning”, as there were no excess goods available for commercial sale. In short, state stores never sold items that were off ration.

Professor Goldman devoted the next portion of her talk to describing in depth how the provisioning system worked. The state developed a hierarchy for it: at the top were workers, beneath them were white collar employees, then adult dependents (people that were not working such as pensioners, or invalids), and at the bottom children under the age of 12. Extra food was allocated for children through special milk kitchens, and special feeding programs were created at end of the war that aimed to bring people back from starvation diseases. At the time there was a widely-held belief that milk could purge chemicals from the human body — chemical workers were given milk supplements. The basic principle of this ration system, according to Professor Goldman, was “those that expend more calories, get more food; a coal miner will be given more than a bookkeeper.”

By 1942, the Germans advanced deep into Soviet territory, doubling the Red Army’s demand for food, and propelling the Soviet Union into a food crisis. When the state recognized that the rations alone couldn’t cover the food needs of both the army and the populations, it began to devise other food resources for the population. Large subsidiary farms (sovkhozy and kolkhozy) were attached to factories. The state also began encouraging decentralized provisioning: contracts were drafted for schools, daycare centers, factory workers, and farms instead of the centralized collection. Fertile ground was transformed into potato gardens, as potato was the perfect food for surviving the war. According to statistic shared by Professor Goldman, nearly 12 percent of everyone’s choleric intake was from these collective gardens.  Although socialism opposes markets, the state provided support for collective farm markets, encouraging peasants to take whatever food they were growing on their private plots and market it in the urban areas. Food rations were highly subsidized, but in peasant markets, buyers had to pay a free market price. Roughly 68 percent of the food consumed during war, however, was provided by rations, and from 1942 to the end of 1943, the rations hit their lowest point. Starvation struck the Soviet Union; in eastern industrial towns, starvation tuberculosis became the single most cause for population deaths. For the first time, doctors began to understand starvation as a disease divided into separate stages. By 1943, mortality by starvation reached its peak; even when food supply improved, starvation diseases began to reach stages of irreversibility.

To combat starvation and the shortages, the state undertook a massive campaign to develop culinary experimentation through foraging and research. Although state sponsored, the effort was largely pioneered from below. Scientists, nutrition experts, canteen cooks, and bakers were among the many ordinary participants. Sugar beets were boiled for soup, potatoes were used as flour substitutes to make bread at bakeries, while pine needles were made into a concoction to combat scurvy. Certain defense factories organized vitamin production units, and housed vitamin shops. Wild greens were gathered throughout the country to be used as vitamin supplementation for the soups served at the canteens, and nutritionists would teach canteen workers how to make their own Vitamin A. The canteen workers, according to Professor Goldman, would recognize the herbal remedies from folk practices of their ancestors. “From an anthropological standpoint,” explained Professor Goldman, “this was a coming together of scientific and industrial knowledge on the one hand, along with folk knowledge on the other.” Protein was “the holy grail” of this food effort, and a few laboratories in Leningrad famously experimented with a yeast concoction. Eventually, the methods of supplementation spread and monotonized across the entire country; potatoes were grown on every green patch, while yeast was shipped to every village across Russia.

To conclude her talk, Professor Goldman spoke about how the WWII experience is primarily relayed through individual stories, often overlooking the collective frameworks that were crucial in the survival effort.  The individual stories, Professor Goldman said, “leave out the critical element that all human beings exist within collective structures.” Acknowledging the power of collaboration between organized state initiatives and collective individual efforts, could help academics better understand and appreciate the more affective sources.