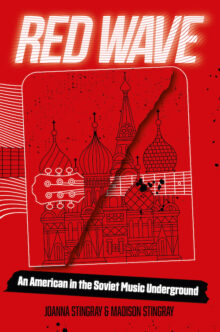 On March 2, Jordan Center’s Michael Danilin (MA, New York University) hosted Joanna Stingray, a California author and musician who brought Soviet underground music to the Western audience, for a talk on her memoir, Red Wave: An American in the Soviet Music Underground (2020). The book introduces the legendary musicians of Soviet rock through her improbable Cold War heroics. In 1985, Stingray produced Red Wave: 4 Underground Bands from the USSR with music by her new friends that she had smuggled to the West. The memoir is her testimony of youthful fortitude and rebellion, her love story, and proof of the power of music and youth culture over stagnancy and oppression. Stream it here.

Stingray began the talk with the recollection of her father’s production of an anti-communist documentary, narrated by Ronald Reagan, and the warning to not to ever set foot on the communist country. In 1984, while touring in the Soviet Union with her sister, Stingray inadvertently encountered and befriended the sophisticated musician Boris Grebenschikov of band Aquarium and vowed to spend as much time in Leningrad as possible.

“I put on my Sony walkman, and I heard Boris’ song ‘Tonight.’ I knew they could only record on two tracks and not on professional machines like we could in the West. And I was immediately transformed by hearing the music. It was haunting — sad and happy at the same time. There were so many emotions. And from that moment, my world changed. I would ask Boris questions, and the philosophical words and the spiritual words that would come out of his mouth [made me think] he had been the most enlightened person in the world I’ve ever met,” said Stingray.

Stingray then went through the prominent Soviet bands included in her Red Wave: 4 Underground Bands from the Soviet Union (1985) by introducing her encounter with and impression of each of them: Aquarium, Kino, Strange Games, and Alisa. “I met Viktor Tsoi through Boris (of Aquarium)… What I found interesting about (Kino) is that Viktor’s had these loops that would get stuck in your head. I didn’t know any Russian, and by the third chorus I found myself singing along… His songs are so hypnotic,” said Stingray.

Despite being sympathized with and protected by the various American and French diplomats in the USSR at the time, Stingray was eventually denied her visa and made an “enemy of the Soviet state” due to her mission of bringing Soviet rock music to the US at the height of the Cold War. She revealed that she was confronted twice by the FBI and once by the KGB. A frequent traveler in and out of Russia, she was interrogated by the KGB and FBI (both thought she was a spy). After months of intervention by the U.S. State Department, she returned to Russia, married Kino’s guitarist Yuri Kasparyan.

“The FBI and the KGB seem to have been trained by the same school,” said Stingray, “they really had tunnel vision for what they thought were red flags.” She showed a photocopy of her own FBI record, which suspects Stingray’s collusion with the Soviet officials and which took Stingray three years to acquire upon request.

Stingray continued to describe the challenges she then encountered on the US end. Having smuggled the tapes from Russia, she realized that many established American record companies like Warner Brothers were enticed by the Soviet rock music but concerned over the questions of its legalities. On top of that, Stingray noted that those companies in the West, owing to their profitable contracts with the Soviet state-owned classical-music label company Melodiya, did not want to risk hurting the existing partnerships.

“I ended up at a small record label called Big Time Records; it was out of Australia and had an office right in Hollywood,” added Stingray.

As it turned out, the growing Western media attention on the Soviet underground music scene eventually led Mikhail Gorbachev to make rock music production the next terrain for national and cultural prestige towards the end of the Cold War. “Gorbachev looked through the whole album inside and out and looked up and said, ‘how can these bands be put out in the west and not here?’ And that’s opening Pandora’s box,” said Stingray.

In the early ‘90s, Stingray became a television host, a recording artist, and well known rock personality throughout Russia. She has published several books in Russia about her time in the music scene as well as much of her photo collection.

In the Q&A session, the audience asked Stingray whether she thought the Soviet rock bands were Westerned or rock music was Sovietized, to which Stingray replied that the power of the Red Wave music lies in its viscerality that transcends the cultural analytical lenses. She also emphasized, drawing on the rock bands in the 1960s in the West, that the lack of commercialization and industrialization was the main factor that kept the Soviet underground music “real” and “free of self-censorship.”