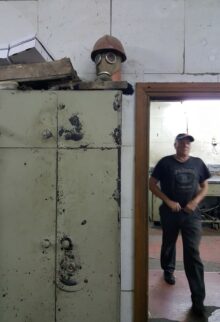 One researcher in search of definitive answers to long-term health effects from Chernobyl has a radical idea about how to accelerate cleanup of the accident’s contamination: Buy the radioactive berries local residents pick, and dispose of them as nuclear waste. Kate Brown, MIT professor and author, suggested the idea as she showed a photo from a recent trip to the region of a young girl with blue stained lips who was picking berries in forests near Chernobyl. Although the girl was too young to have experienced the 1986 nuclear disaster, Brown made the case that she, too, qualified as a nuclear cleanup worker. Instead, for now, the girl’s berries are likely destined for store shelves in Europe, even the U.S. As part of exhaustive archival research, Brown posed as an undercover berry picker, joining throngs of locals who gather the forest fruits and sell them to large-scale buyers for around $25 for a day’s labor.

“Think of the berries in terms of bioengineering. All those chemicals and bulldozers could not get this territory clean. But the berries…are doing a fantastic job of cleaning up the environment,” said Brown, speaking at her Jordan Center Occasional Series talk, “The Great Chernobyl Acceleration.”

The talk, which took place on October 24, 2019, was introduced by Bruce Grant, Chair of Anthropology at New York University.

Research shows that even small amounts of radioactivity in soil easily enter the food chain. Over time, contamination in food such as berries, mushrooms, and wild boar intensifies.

“If we face this problem not with denial, but with eyes wide open, humans are incredibly creative and innovative. We could come up with all sorts of solutions to these problems.”

Brown, who is Professor of History in the Science, Technology and Society Department at MIT, said public perception, and misconceptions, of the Chernobyl nuclear disaster were reinforced by the recent HBO mini-series that focuses on the minutes ahead of the event and the months following it, with action centered on the reactor site.

“Chernobyl is often framed as an accident in a very constricted time and place . . . That’s exactly how Soviet officials wanted people to think about it,” said Brown.

Soviet officials took great care to control the narrative surrounding the event, the effects of which are so long term that humans lack patience to continue caring about then. Following the Soviet Union’s collapse, UN officials took over management of the disaster, perpetuating the idea that residents in the area should remain instead of relocating, a policy that remains in place today.

One fallacy is that the greatest impact from the disaster is the contaminated area immediately around Chernobyl, known as the exclusion zone. What most people do not know is that there is a second area, with levels of contamination equal to those surrounding the reactor that melted down.

Nuclear fallout in this second area was the result of human intervention. In the days after the April 26, 1986, accident, a storm front moving northeast passed through the region. Soviet officials engaged weather manipulation techniques to stop the cloud system from reaching Voronezh, Yaroslavl, and Moscow. They induced the clouds to release radioactive rain on southeastern Belarus, the location of a second contaminated zone. Although largely depopulated today, residents lived in this area until 1999, despite extremely high radiation levels.

Brown’s research uncovered misleading and incorrect information in official records. For instance, the UN estimated the death toll from Chernobyl was 33 to 54 people. Brown’s findings revealed a much larger official tally, such as the number to whom Ukraine paid victim compensation: 35,000 families. Even this number fails to paint the full picture as it was limited to deaths of married men as a direct result of the accident. More recent estimates say deaths have likely reached 150,000, Brown said. While Moscow officials said hospitalized victims numbered 300 emergency workers, Ministry of Health records in Kiev record 40,000 were hospitalized, of which 11,000 were children.

Brown also shed light on the mysterious “liquidator” status of some 200 wool workers in Chernihiv, Ukraine, a relatively “clean” town 50 miles from the reactor site. “Liquidators,” or first responders at the disaster scene, were awarded subsidies for documented radiation exposure.

But the workers in the Chernihiv factory who were washing wool in the aftermath of the accident—far from the disaster site—also were exposed to of high radiation levels that rivaled levels of recovery workers with more direct exposure.

Brown sought out the surviving wool workers and met with the 10 who were still living and have not retired with disability status. Her subsequent research corroborated the workers’ stories about how radioactive wastewater from the wool factory washed directly into the local drinking water reservoir.

Ministry of Agriculture records revealed further paths of contamination for the roughly half million people living in areas contaminated by Chernobyl radiation fallout. Much of the area is marshland, without plumbing or paved roads, and subject to seasonal flooding. Those affected tended to be uneducated subsistence farmers.

For this population, officials used manuals to illustrate the dangers and provide information about how to cope with the herculean task of minimizing exposure to radiation. The late Soviet government also drew up plans for infrastructure improvements and methods to deliver uncontaminated food supplies, ambitious efforts which largely failed.

These instructive technical manuals that Brown found in the archives about how to live in a radioactive landscape formed the basis of Brown’s book: Manual for Survival: A Chernobyl Guide to the Future, published in March by Norton.

“I can’t tell when looking at these instruction manuals whether they were serious about this fast-tracked modernity for these villages, whether the authors knew that their schemes and their budgets were basically utopian. I admire the effort, the intellectual brainpower and the dedication of billions of rubles to repair the mess. No state had ever tried . . . to clean up an accident on this level,” Brown said.

But Soviet leaders decided relocating more than a million people from contaminated lands was politically impossible.

“They discussed it in meetings and dismissed it . . . It was basically too embarrassing to admit that kind of defeat,” Brown said.

After the Soviet Union collapse, the UN took over management of the disaster. But they propagated the idea that leaving inhabitants in place was the best course, UN archives show. This idea was backed by U.S. officials—despite mounting evidence to the contrary on the public health disaster unfolding on Chernobyl contaminated lands.

Brown said that the reason that U.S. officials backed this approach was mounting concern over lawsuits related to exposure of Americans due to the production and testing of nuclear weapons within the U.S..

Japan followed these guidelines recommending leaving people in place following the March 2011 Fukushima nuclear disaster. And new planning manuals for the next nuclear disaster will advise the same, Brown said.

Roughly one million people were left to live on Chernobyl-contaminated lands.

“In a new, neo-liberal order the responsibility for cleanup and dealing with the disaster devolves from the state and from UN agencies. People are left to manage it on their own,” Brown said.

In fact, UN programs were set up in the 1990s to teach people how to farm and feed their families in a post-nuclear order, the archives show.

Chernobyl is often called the world’s worst nuclear disaster. But levels of radioactive cesium levels in the Chernobyl-area swamp were elevated long before the plant was built, likely due to weapons testing. For this reason, it is more accurate to think of the event as part of a continuum of large-scale contamination.

Atmospheric testing of nuclear weapons, beginning in the 1950s, has produced radioactive fallout at a level an order of magnitude higher than Chernobyl emissions. This trend can be correlated with higher incidence of cancers, including thyroid and childhood. Research on causation shouldn’t be left to scientists alone due to a poor track record to obtain accurate results.

Today, there is an active media campaign to “normalize” the Chernobyl zone. Adventure tourism into the zone has increased 30 percent since the Chernobyl TV mini-series. One entrepreneur is marketing “Atomik” vodka produced from rye grown in the Chernobyl zone. These stories are driven by demand in media production to cast the “tired” story about Chernobyl’s devastating contamination into a new narrative about thriving wildlife or the zone’s ability to produce consumable products.

“Editors are always looking for a new spin on an old story,” Brown said.

Professor Tony Anemone of the New School posed a question about the comparison between Soviet and Japanese responses to their respective nuclear disasters. Regarding the Soviet response, Brown said: “I think they did the best job anyone has yet managed to do, and even then, it became an intractable situation.” She added: “The big charge was always that [the Soviets] waited three days to tell the world. But it takes a while to figure out what’s happening inside a burning nuclear plant that you can’t approach safely. The Japanese, in comparison, waited two months. . . . I don’t think the Japanese score very well.”

“The Japanese evacuated a number of people, but they quickly wanted to move them back. And the Soviets wanted to move [their people] back. But they got talked out of it by their local scientists.”

Brown also pointed out that one Japanese method of isolating contaminated waste recently failed due to an October 2019 typhoon.

For a U.S. comparison, Brown spoke about contamination from the now-closed Rocky Flats Plant, near Denver, that produced parts for nuclear weapons.

“When people say Chernobyl could not happen in the U.S., my retort is that it’s already occurred . . . not as an accident, but as an operating order, as disaster by design,” Brown said.

Professor Bruce Grant from NYU asked whether Brown saw the post-nuclear manuals in her research as unique, given the standing of the USSR as a “hyper-textual state,” one which was continually explaining to its citizens how to live. “I can’t imagine the U.S. government doing it because you’d have to admit there’s a problem,” Brown said. Manuals were typically classified, and written for managers by members of closed military establishments in Moscow. They often included complicated formulas that would have been too complicated for uneducated subsistence farmers to comprehend.

A listener in the audience pointed out that she was recently denied life insurance for a relatively minor thyroid issue that her doctor said should not be considered a significant health concern. But the insurance company raised the issue because she was from the greater Chernobyl region.

“There’s the public pronouncement of risk, and there’s an actuarial pronouncement, which is much more dire. And those are the [proprietary] records we’re not seeing,” Brown said.

One question was about the rocket explosion in Russia in August that killed at least seven workers, including elite engineers who were working on a missile test suspected to be a nuclear-powered cruise missile touted by Putin. She believes the secrecy surrounding the incident is related to the project’s military sensitivity, and that information indicates the exposure is far lower than during Chernobyl.

Professor Anne Lounsbery from NYU asked how Brown’s work on the 2005 book A Biography of No Place, an account of the peoples of Soviet Ukraine along the border with Poland, informed her new book, Manual for Survival.

Brown said she understood the historical and ethnic background of the population. However, at the time she ignored the issue of Chernobyl, which emerged as a theme in her work.

“My attitude at the time was that of a dismissive Westerner. It’s almost shameful now,” Brown said.

Another question was posed about the Chernobyl response by Belarus vs. Ukraine. Brown highlighted the efforts off physicist Vassili Nesterenko (1934–2008). Although discredited officially, he was responsible for the development of a critical body of evidence by the Academy of Sciences of Belarus, which informed Brown’s work.