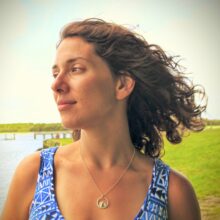 On September 25, the Jordan Center hosted poet and literary scholar Julia Kolchinsky Dasbach, for her talk “The Many Names for Mother: Bearing Lyric Witness to the Holocaust in the East,” on her latest book of poetry with the same title. Julia Dasbach emigrated from Ukraine as a Jewish refugee when she was six years old. She now holds an MFA in Poetry from the University of Oregon and is a Ph.D. candidate at the University of Pennsylvania, where her work focuses on contemporary American poetry about the Holocaust. Her poems have won Best New Poets, the Williams Carlos Williams University Poetry Prize, and New South’s Poetry Prize. The talk, as part of the Occasional Series, was introduced by Professor Rossen Djagalov, who stepped for Professor Maya Vinokour.

Before opening the talk with a recital of her poem “For War and Water,” Julia Dasbach thanked her great aunt, who was seated in the audience, and whose face was the first Julia saw upon arriving to the United States. After the recital, Dasbach explained that her writing initially “looked to the past,” focusing on themes of ancestral trauma and her migratory childhood. In anticipation of the birth of her son in 2015, Dasbach became convinced that her poetic focus would shift into the future. But the opposite happened, as “motherhood entrenched [her] writing deeper into history, and the intergenerational trauma” into which her children “are now inscribed.” The next poem she recited, titled “Archive,” features a modified photo from the Auschwitz Museum of the “The Book of Names,” a large memorial in the shape of a book filled with names of Holocaust victims. While turning the pages, a sense of hope filled Julia as she searched for the name of her great grandfather. But the name never appeared, nor did the names of any of her other family members that perished in Ukraine. Dasbach then proceeded to recite a poem called “Against Naming,” inspired by an incident when Auschwitz Museum employees set off sprinklers for the visiting children during the historically hot summer of 2015.

The next poem Dasbach recited at the talk, was dedicated to the same great grandfather whose name she failed to find in the Book. Rather than fleeing Kiev with his family to the Urals when the Germans invaded in 1941, he remained in the city to fight as a partisan. Dasbach’s great grandmother returned to look for her husband once the war ended, only to find an empty apartment and rumors that a neighbor had turned him in to an SS officer. “There is nothing to prove or disprove,” Dasbach said, “just the absence of anything related to him in an archive.” This absence henceforth became the thematic focus of work. The historical mode, as Dasbach explained, is often too fixated on “naming, cataloguing, and counting,” which makes for a troubling rendition of the Holocaust across historic sites and memorial institutions. Dasbach went further to claim that such a mode of documentation “is mimetic of the programmatic violence and record-keeping enforced by the Nazis themselves.” Archiving especially fails when it comes to the Soviet territories, as the Nazi soldiers were tasked with leaving no trace of the Jewish population. Lyric witness, as Dasbach refers to her style of poetry, serves to connect intergenerational stories with the “poet’s current sensibility of self” in an attempt to compensate for what is lost in the archives. Dasbach quoted philosopher Jacques Derrida to further illustrate her ambition: “The archive, leaves certain themes to be remembered, while leaving others to be forgotten.” The photograph of the archive that Dasbach included in her poem, deliberately features the section where the name of her great grandfather could have been found. Dasbach characterized her conceptual thinking behind this inclusion as “evidence by way of its very lack” – the photograph undermines the archive in its role as “the keeper of history” and the professor of “truth.”

Dasbach then recited a poem called “Learning Yiddish” that she wrote to honor her great grandmother. “The impulse to name,” Dasbach explained after the recitation, “is to try to understand – in the root of trauma is the incomprehensible.” This idea of incomprehensibility inspired Dasbach to turn to etymology, “because when it comes to trauma, language fails also.” Poetry, according to Dasbach, has the power to “render this failure transparent.” In “Learning Yiddish,” Dasbach tries to “startle the rift between the destruction of language and its creation,” in an attempt to make this rift audible. In relation to the act of coping with trauma, the poem engages in further questioning, rather than closure. Dasbach lended a quote from Elaine Scarry’s The Body in Pain to elucidate her preoccupation with the origins of language: “To witness the moment when pain causes a reversion to the pre-language of cries and groans is to witness the destruction of language; but conversely, to be present when a person moves up out of that pre-language and projects the facts of sentience into speech is almost to have been permitted to be present at the birth of language itself.”

While not denying the need for history and records to understand the scale of catastrophe and to serve as proof that it happened, Dasbach argues that, to a certain degree, the focus on the narrative “distracts from feeling its effects,” and from the question of what is to be done in the present time. When explaining that her dissertation deals with contemporary American poetry about the Holocaust, Dasbach often faces disbelief that this subject is still of interest to poets. But the Holocaust remains a common topic for poetry; “mourning is not only to remember, but to construct how we understand traumatic memory,” she said. “Unknowable answers must be rendered through lyrical witness,” she concluded, before reciting two more of her poems “Letter to My Son” and “Jokes Don’t Translate Well Into Russian”.

In the Q&A Session Rossen Djagolov asked how Dasbach navigates between the academic work and creative work with her poetry. Dasbach responded by characterizing her dissertation as a “hybrid scholarly and creative project,” explaining how each dissertation chapter tries to imitate the stylistic form of a poet she investigates.