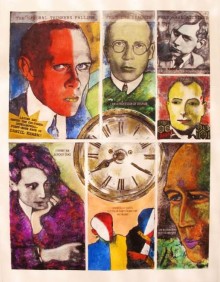 On Saturday, April 20, the Poets House hosted a panel discussion on the Russian Avant-Garde, co-sponsored by the Jordan Center. The panel consisted of Anthony Anemone, Polina Barskova, Ainsley Morse, Eugene Ostashevsky, Peter Scotto, Bela Shayevich, and Matvei Yankelevich, who all gave very interesting accounts of the works and philosophical thinking of Daniil Kharms, Vsevolod Nekrasov, Alexander Vvedensky, and other figures of the Russian avant-garde. Ranging from topics such as authorship, conceptualism, the challenges of translating, and objectification of language, the colloquium offered diverse and knowledgeable presentations to both academic experts and to those yet uninitiated into the absurd world of the Russian avant-garde.

Matvei Yankelevich and Eugene Ostashevsky focused on the avant-garde’s play with language and semiotic concepts. Both Kharms and Nekrasov investigate the materiality of language, and the idea that language in the end exhausts itself. In their poetry, the placement of a word might carry as much significance as the meaning of the word itself. Ostashevsky even argued that the avant-garde, and especially the figures of OBERIU, are indirectly representatives of “the language turn” within philosophy, as they investigate how language shapes the way in which we conceptualize our surroundings. At the same time, the avant-garde shows the challenging role of the subject in a world that is constantly being deconstructed. This offered an interesting philosophical background to the following presentations.

Anthony Anemone and Peter Scotto recently published the book I am a Phenomenon Quite out of the Ordinary: The Notebooks, Diaries, and Letters of Daniil Kharms. Both Anemone and Scotto presented some of the challenges involved in working on this publication, as the works of Kharms are often overly politicized and historicized. The translators were therefore concerned with trying to shed light on Kharms the person, rather than on Kharms as a commentator of Soviet realities. Through this approach, Anemone and Scotto hope to more clearly show the interrelation between life and art that was so important to Kharms and other members of OBERIU.

Ainsley Morse and Bela Shayevich presented their newly translated collection of poems by Vsevolod Nekrasov, called I Live I See: Selected Poems, and gave an interesting account of how elements of the Leningrad based avant-garde spread to Moscow, and played a part in the development of new underground poets. This group of poets was further addressed by Polina Barskova, as she noted how many of them have never been recognized, nor translated. In addition, Barskova raised an interesting topic as she pointed out how the OBERIU and its followers in a number of ways seem to encapsulate themselves from history, by never mentioning historical events directly. This aspect of the avant-garde makes it especially difficult to interpret and understand the literary figures within a set historical framework.

The discussion that followed circled around an intriguing and extremely complicated question: What, exactly, is the significance of the Russian avant-garde? Why is it still relevant? The panelists all pointed out how the avant-garde’s literary heritage is important to investigate in order to understand the initial years following the Russian revolution. While many of the revolutionary poets offered utopic accounts of Soviet society, the avant-gardists were witnessing how the Soviet project instead presented great challenges and disappointments. As one panelist phrased it, “the members of the avant-garde were the first to grow up after the revolution.” At the same time, the literature of the avant-garde speaks to many of our personal and existential concerns, and also pinpoints the difficulty of finding an objective reality in a chaotic world. The avant-garde poetry therefore indirectly critiques the notion that we all should be able to understand each other. Quite the opposite: language misshapes reality more than it makes us understand it better, which indeed much avant-garde poetry exemplifies.

The panel discussion was followed by readings from Daniil Kharms’ I am a Phenomenon Quite out of the Ordinary: The Notebooks, Diaries, and Letters of Daniil Kharms, Alexander Vvedensky’s An Invitation for Me to Think, and Vsevolod Nekrasov’s I Live I See: Selected Poems, which all showed the diversity, humor, and existential seriousness that characterize these poets. Here I would like to especially emphasize Bela Shayevich’ reading of Nekrasov’s poems, as she showed an extreme sensitivity towards his poetry.