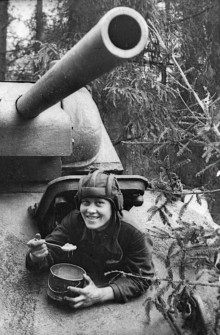 The only sanctioned personal item for a World War Two Red Army soldier to carry was a spoon. Often highly personalized, soldiers used them to eat soup and kasha from state-issued mess tins. To own one was “the mark of a real soldier,” writes Brandon Schechter in his new book, The Stuff of Soldiers. The book represents a decade of research on the material culture of World War Two. Known in Russia as the Great Patriotic War, some 34.5 million soldiers in the Soviet Union mobilized against Hitler’s forces. In his book, Schechter attempts to tell this epic event’s story through objects such as the humble spoon, the spade, the wristwatch and military medals.

“Soldiers in the Red Army often have a very nomadic existence, where they’re traveling over great distances separated from their families… [yet] maintain a sense of self through various objects,” said Schechter in a presentation at NYU’s Jordan Center for the Advanced Study of Russia, which took place November 11, 2019. The book, published this year by Cornell University Press, includes chapters on food, the contents of a soldier’s knapsack and the trenches. The talk was introduced by Yanni Kotsonis, Professor of History and Russian & Slavic Studies at NYU.

Typically, a Red Army soldier would carry 24 kg (53 pounds) of gear or more, most of which consisted of government-issued rations, weapons, ammunition and clothing. Anything else needed to be extremely useful, or carry its weight in emotional significance. So much that these objects received precious mentions in letters home: a knife, a comb, a dish, a hand-stitched tobacco pouch. These exchanges often included a promise to return items home, in other words that a solider would survive the war.

Moreover, the objects are a particularly rich trove of cultural history since the Red Army was representative of the country demographically: The draft age was 17-55, included women, and cut across ethnic and class lines. This compared to a draft age of 18-35 year olds in the U.S., and only men.

News from the frontline
Like eating utensils, letters allowed soldiers to maintain a sense of self in the vastly impersonal army life.

“Letters allowed soldiers to insert themselves into the everyday lives of their loved ones, and maintain a web of connections with friends and family that made life meaningful under conditions in which death was a very likely outcome.” So esteemed was this method of boosting morale —Red Army soldiers had no regular leave — that mail to and from the army was free of charge. These letters, another focus of Schechter’s research, were important for what they contained as well as for what censors removed. A soldier’s address was linked to his or her unit: a transfer, battle injury or remote position meant no mail. Censors targeted military secrets and signs of betrayal of Soviet attitudes. Authorities mined letters for clues about the army’s needs and moods. Schechter’s research showed that the censors themselves, typically teenaged girls, were error-prone. They also show that letter writers from the frontlines were keenly aware of what censors would allow: A sample of 55,000 letters over two days in 1943 revealed a mere 50 or so complaints. However, civilian letter writers possessed far less understanding about what was acceptable. Instead of being intimate correspondence, letters tended to serve as entertainment and news exchanges, often read aloud.

One of the letters’ most striking aspects is the use of official language in letters: Stalinist slogans and Soviet propaganda.
“These are people who are relatively new to literacy. It’s the first generation of mass literacy in the Soviet Union. Part of it is discomfort with the written word.”

The spade—critical for survival
Also worthy of study was the soldier’s 50 cm government-issued spade. Once troops stopped advancing, commanders instructed soldiers to dig holes deep enough to stand in for protection.These spaces evolved into sophisticated systems of connected trenches: Soldiers move past the mode of survival, from gunfire and the elements, and into recreating aspects of normal life.

“What’s fascinating is the extent to which Soviet trenches come to resemble mono-productive cities of the First Five Year plan.” Theses cities were complete with spaces of production and rest, and included infrastructure such as bathhouses, clubs and libraries.

“This was a significant space, not only for waging war, but for the entire Soviet people to come together and learn about each other.” Rather than examining objects of known provenance, Schechter chose a generalist approach. His study of objects was through diaries, letters and archives, rather than items in museums. The genesis of The Stuff of Soldiers was Schechter’s interest in collecting WWII-era spoons at St. Petersburg flea markets as a student. “I was a collector before I was a historian,” he said.

Asked by Professor Anne Lounsbery about archival work of the letters, Schechter said he carried out much of the research in Kazan, where he was studying Tartar, and at the Komsomol Archive in Moscow. He chose correspondence with letters numbering in the hundreds which created more interesting narratives, and were likely officers or Komsomol members. “My letters almost certainly skewed toward more educated people,” Schechter said. One writer’s correspondence with his wife only covered art and literature, with no mention of the war. Others were succinct, only to inform families they were alive. Another consisted of only profanity and praise for Stalin. “For me it’s interesting as a genre, to see what function they fulfill.”

One question was about the value of accessing material culture through letters and diaries. The method served a dual-purpose of cataloging the objects for future use and study, and offering an interpretation of them. It also stemmed from initial research on national minorities, using letters and propaganda, where objects played a prominent role. Schechter said objects carry more weight in the Soviet system than elsewhere. “Remember, this is the Soviet Union. It’s a Socialist dictatorship that promises greater abundance. It is functionally in a constant state of shortage and that is distributing stuff to key demographics.” Material goods are a key motivator for the Nazi invasion, i.e., the acquisition of things for the benefit of German citizens. Russian soldiers’ approach to material culture is different than that of U.S. soldiers since the latter is coming from a state of abundance, Schechter said. Schechter said he was also influenced by the work of Tim O’Brien, author of The Things They Carried.