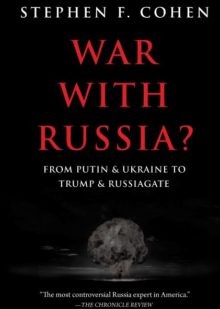 On April 23, 2019, the Jordan Center hosted Dr. Stephen F. Cohen for a talk on his latest book, “War with Russia? From Putin & Ukraine to Trump & Russiagate”. Commentary was provided by Jack Snyder, Robert and Renée Belfer Professor of International Relations at Columbia University. The event, as part of the New York City-Russian Studies & Policy Series and co-hosted by Columbia University’s Harriman Institute, was introduced by Jordan Center Director Joshua Tucker.

Professor Cohen began the talk by describing his long and prolific academic tract. In the 1990s, Cohen believed that he needed to create something called scholarly journalism, so he began a column in The Nation that he dubbed “Sovieticus”. He is among a select number of modern historians referred to as “revisionist historians,” while his prior major work concerned the fall of the Soviet Union, as well as a widely-praised biography of the Bolshevik revolutionary Mikhail Bukharin. In recent years, Professor Cohen has been labelled “the most controversial Russia expert in America”, and this is in due part to his recent book warns of the existential dangers a hardline foreign policy on Russia could pose.

Professor Cohen segued his talk into outlining the several themes in his book, specifically devoting time to the ones that have received the most criticism. In his claim that the U.S. and Russia are currently locked in a new Cold War, Cohen garners almost universal agreement among scholars and experts alike. But his second point, that this new Cold War was triggered by Washington, rather than by Moscow, is where Cohen parts ways with most academics. According to Professor Cohen, the “best literature about the original Cold War period” equally distributed blame for the conflict on both sides, while the literature on the new Cold War exclusively places blame on Moscow. Such a neglect of Washington’s role, argued Cohen, is incorrect. Professor Cohen’s point that this Cold War is significantly more dangerous than the first, has also garnered a strong reaction. Cohen justifies this claim with three arguments, the first being that this conflict is right on Russia’s border. According to Professor Cohen, Berlin was the epicenter of the original Cold War, while proxy wars were happening primarily on other continents; today’s proxy wars are happening on the border of Russia. Another controversial argument Cohen makes is that the two world leaders, Trump and Putin, are limited “by the media” in their ability to negotiate. In the first Cold War, the Cuban Missile crisis was the closest the two powers came to destructive conflict, but leaders Nikita Khrushchev and John F. Kennedy were both “permitted by the media landscape to talk it out.” In the present day, Cohen argues that “Trump is so demeaned, and Putin so loathed”, that the two world leaders wouldn’t be able to negotiate a Cuban Missile Crisis-like event. Along that vector, Cohen also claimed that there are no anti-Cold War initiatives in the United States: not on the government level, nor on university campuses.

Professor Cohen then turned the conversation to RussiaGate, posing the claim that the scandal is a hoax initiated by American intelligence agencies. The vast amount of resources Professor Cohen said that he looked through, suggested no real “evidence” that Russia somehow colluded with the Trump administration. Russiagate, according to Cohen, was an attempt by the intelligence services to infiltrate the Trump campaign. In light of the RussiaGate scandal, Cohen also believes that the United States is entering a neo-McCarthyist era, where “pro-Russia” journalists are not getting published, pro-Russia pundits are not getting airtime, and even certain dissertation topics are getting declined for their pro-Russia tint. The overall media coverage of Russia, according to Cohen, has been a poor “media malpractice” – selective and regurgitative with its coverage, sources, and experts. Cohen’s final point is that the United States is beginning to commit Soviet-era practices as a result of this “witch hunt,” imprisoning Russians such as Maria Butina on alleged espionage charges. Professor Cohen concluded his segment by admitting that most of these point have been challenged by critics, which is something he accepts, and states that he is always open for debate.

For the final third of the event, Jack Snyder provided  commentary on the book, offering up moments where he agreed with Cohen, and where he disagreed. He prefaced the commentary by praising Cohen’s book for “getting readers into the belly of the beast” of the U.S. – Russia conflict and Putin’s Russia. Snyder agreed with a specific claim that Putin didn’t create Russia’s kleptocracy, but rather saved and rationalized it. Snyder also brought to light Cohen’s claim that the Russians’ high approval of Putin and Stalin should not be ignored – a claim that Snyder characterized as realist. In Snyder’s interpretation of Cohen’s point, “it’s realistic, necessary, and wise” to ignore that the Russian regime “is an illiberal regime,” when dealing with international relations.  Snyder ultimately disapproved of this claim, however, stating that even the realist position understands that the “behavior of countries in foreign relations are inevitably shaped by tools and habits rooted in the domestic politics.” In Putin’s Russia, those tools are “corruption and repression, the opposite of the law-based institutions.” Professor Snyder concluded the thought by highlighting that no democratic liberal countries have ever fought one another. Towards the end of his segment, Professor Snyder also brought up moments in Cohen’s book that hint at whataboutism, and moral equivalences.