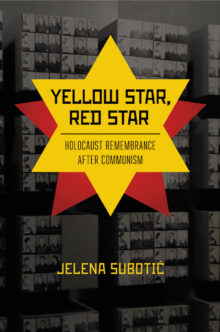 In 2014, the Historical Museum of Serbia in Belgrade displayed a Buchenwald photo for its exhibition on crimes committed by the Yugoslovian communist regime after 1945. “Such an attempt to equate communism with fascism appropriates the Holocaust imagery to delegitimize communism,” said Professor Jelena Subotic in a talk on her new book, Yellow Star, Red Star (Cornell University Press, 2019). In the talk, which she gave on February 5, 2019 at NYU, Professor Subotic recounted the instances of purposefully conflated historical memory across contemporary Eastern Europe and attributed these phenomena to both nation-state nativism and the cultural encroachment of the European Union. Professor Subotic is a scholar of international relations theory, memory politics, human rights, transitional justice, international ethics, state identity, and the politics of the Western Balkans, and a Professor of Political Science at Georgia State University. This talk, held in collaboration between the Jordan Center and NYU’s Politics Department as part of the Comparative Politics Speaker Series, was introduced by Professor Shanker Satyanath, Professor of Politics at NYU.

Professor Subotic analyzed the commonplace conflation of communism with fascism across Serbia, Hungary, Croatia, Poland, and other Eastern European states. “Many of the museums and memorials have begun depicting their entire nation-state as victims of foreign regimes,” said Professor Subotic. By doing so, they not only ignored the lived experience of victims of those historical regimes but also avoided any critical self-examination of crimes that local populations were complicit in, such as the crimes of the Holocaust, or the crimes committed by the Soviet dictatorship. This is evident in the narratives put forth by the House of Terror Museum in Budapest, which dismisses Hungary’s own fascist history in 1940-1944, or the Memorial to the Victims of the German Occupation, which memorializes the entire nation of Hungary.

“It is Holocaust remembrance turned inward, away from the actual victims of the Holocaust or the Holocaust itself, into the ‘narcissistic identification of ritual of suffering,” Professor Subotic said, noting that such a ritual was appropriated to memorialize a different kind of suffering, caused by the Soviet authorities and by the Nazi regime against victims not limited to Jews.

This can be further contextualized in the identity crises experienced by the Eastern European states today. “To become fully European means to share the European cosmopolitan narratives of the 20th century, perhaps the strongest being that of the Holocaust,” said Professor Subotic. While the Holocaust was remembered as ethnic violence in Western Europe, it was largely curated as a biproduct fascist ideological in the communist regimes in Eastern Europe. Therefore, unlike in the Western European political memory, which elevates Jews above other ethnicities that suffered from the Holocaust, the Eastern Bloc countries were not centered on any particular ethnicity, and their memory is thus open for manipulation and revisionist historiography.

The two distinct Holocaust narratives caused anxiety in Eastern European states after 1991, when they struggled to culturally integrate into NATO and the EU. In particular, Professor Subotic notes the European Parliament’s alliance with the right-wing European People’s Party, who pushed for the incorporation of trauma experienced by the Stalinist state into the pan-European Holocaust experience.  “Holocaust remembrance challenges the security of national identity, because it problematizes the very biographies on which those identities are based,” Professor Subotic said.

Throughout the talk, Subotic also recalled many instances in which historical memory of the Holocaust was reconceptualized in Eastern European states in order to denounce the Soviet influences and foster local nationalist sentiments.  The Bleiburg Repatriations, for example, where Yugoslovian forces executed Axis soldiers and civilians in 1945, was rebranded to the “Croatian Holocaust” in 1995. Jasenovac, a major Holocaust site in Slavonia, exhibited a fabricated image depicting happy Jewish inmates and a at an alleged former communist labor camp. The ways in which these modern-day interventions highlight the evils of communism depend heavily on maneuvering and downplaying the actual history of fascism. Therefore, ironically, Holocaust remembrance across Eastern European states in the present day actually tends to espouse neo-Nazi rhetoric.

To conclude her talk, Professor Subotic remarked that when a nation-state uses its power to construct a historical memory infiltrated by external political narratives, it undermines the very basis of its own identity. As Eastern European states solidified their post-communist memory politics, they strategically distanced themselves from local and authentic understandings of WWII. Memory politics in the Eastern European context become not about the Jews or the Holocaustsm, but rather serve to create an environment in which all others are excluded, including Jews, or new faces of alterity such as Muslim refugees and other minorities living in these countries today.

In the Q&A session, questions were raised on whether there have been attempts from civil society to counter state-led memory appropriation. In response, Professor Subotic mentioned independent projects such as killingsites.org, an academic photo archive that documents this marginalized, first stage of the Holocaust in Serbia and Croatia. But while the project is sponsored by Federation of Jewish Communities in Serbia (FJCS), Department of Cultural Studies (DCS), Center for Holocaust Research and Education (CHRE), and other similar organizations, such independent projects are, partly due to lack of funds, not able to infiltrate or disrupt mainstream public discourse in most of the Eastern European countries she discusses in her work.