Remaking the social contract? Pension reform and protest in Russia 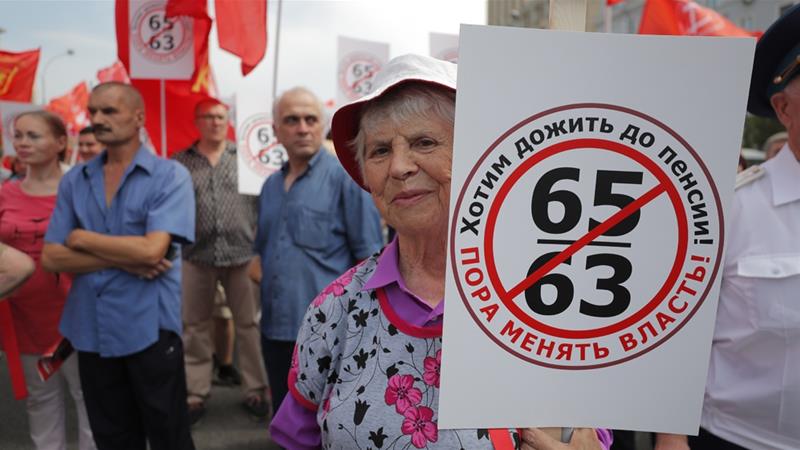 Please join the Harriman Institute and New York University’s Jordan Center for the Advanced Study of Russia for a panel discussion examining the Kremlin’s recent attempts at reforming the pension system in Russia.
This event is supported by a grant from the Carnegie Corporation of New York. It is part of our Russian Studies & Policy event series.

Katerina Tertytchnaya, Lecturer in Comparative Politics in the Department of Political Science at University College London.

Andrei Kolesnikov, Senior Fellow and Chair of the Russian Domestic Politics and Political Institutions Program at the Carnegie Moscow Center.

On the heels of securing his fourth nonconsecutive term as president of Russia in March 2018, Vladimir Putin introduced plans to increase the retirement age to 65 from 60 for men and to 63 from 55 for women. The announcement sparked an immediate wave of protests from all corners of Russian society: pensioners, students, systemic political parties and the democratic opposition. Critics pointed out that with a life-expectancy of 66, most Russian men would not live to see retirement under the new system. In an unusual move, Putin appeared on television in August 2018 to personally defend the proposed changes as absolutely necessary in light of Russia’s labor force makeup and long-term budget forecasts. The new legislation passed a month later, but not before damaging Putin’s approval ratings.

Please join the Harriman Institute and New York University’s Jordan Center for the Advanced Study of Russia for a panel discussion examining the Kremlin’s recent attempts at reforming the pension system in Russia. Our panel, consisting of a historian, political scientists and analyst will put the pension reform and the social response to it in context. Russia’s old-age pension system is one of the last vestiges of the social contract formed between the state and its citizens in the Soviet Union and is, for many Russians, an inviolable guarantee. The beneficiaries of the current system also form the bedrock of Putin’s constituency and paying pension arrears was one the crowning achievements of Putin’s ascension to power in the early 2000s. Yet the system is in desperate need of reform to address changes in Russia’s economy and demography. Many Russians worry, however, that the reform will be mismanaged and that they will pay into a system which they will never be able to use. As Putin begins his last constitutionally permitted term as president, tough economic decisions loom on the horizon that will require further renegotiation of the relationship between the Russian state and society.

Kristy Ironside is a historian of modern Russia and the Soviet Union. She is currently finishing her first book, tentatively entitled Money and the Pursuit of Communist Prosperity in the Postwar Soviet Union, 1945-1964. This book looks at how money, an ideologically problematic ‘vestige of capitalism,’ was mobilized by the Soviet government in the intertwined projects of recovering from the Second World War’s damage and building a prosperous communist society. This project has spun off articles looking at related economic and social phenomena in Soviet history, exploring the balance of coercion and incentives, Stalinist and Khrushchev-era economic thinking, and the nature of the postwar Soviet welfare state. Her articles have appeared in Kritika: Explorations in Russian and Eurasian History, The Soviet and Post-Soviet Review, Slavic Review, Europe-Asia Studies, and The Journal of Social History (forthcoming).

Katerina Tertytchnaya is a political scientist working on protests and authoritarian politics. Her current book project draws on evidence from Putin’s Russia to examine how non-democratic incumbents manage public opinion and deflect blame when performance is poor. Prof. Tertytchnaya’s research has appeared or is forthcoming in the American Political Science Review, Journal of Politics and Political Behavior.

Andrei Kolesnikov is a senior fellow and the chair of the Russian Domestic Politics and Political Institutions Program at the Carnegie Moscow Center. His research focuses on the major trends shaping Russian domestic politics, with particular focus on the fallout from the Ukraine crisis and ideological shifts inside Russian society. Kolesnikov also works with the Gaidar Institute for Economic Policy and is a frequent contributor for Vedomosti, Gazeta.ru, and Forbes.ru. He sits on the board of the Yegor Gaidar Foundation and is a member of the Committee of Civil Initiatives (the Alexei Kudrin Committee).