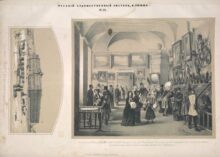 Margaret Samu works on eighteenth- and nineteenth-century Russian art and design in a global context. Her current book project is titled Russian Venus: The Female Nude in the Art World of Imperial Russia. She teaches in the School of Art and Design History and Theory at Parsons School of Design/The New School, in New York City.

When I started working on nineteenth-century Russian art almost two decades ago, one of the things that surprised me most was the stark division between the two halves of the nineteenth century—and the absence of a middle. In both the literature and in the work of art historians, it seemed to be a tale of two periods, with little sense of continuity from the first to the second half. The Crimean War, the death of Nicholas I and accession of Alexander II: it’s true that these major historical events occurred at mid-century, but I couldn’t understand why any of them would cause the split I observed in the art world.

Period breaks in the nineteenth century were not new to me, but in the other cultures I’d studied, they did not seem so absolute. In American culture, we usually separate the antebellum era from the post-Civil War period, yet many artistic movements (landscape painting, American scene painting) straddle the two. In France, a significant aesthetic break occurs in 1863, with the Salon des Refusés, Manet’s Luncheon on the Grass, and the concept of modernism. Yet the big state museums split the century earlier, with the Louvre holding works before 1848 (revolution, Second Republic), and the Musée d’Orsay holding works from 1848 (realism) through 1914. Plus, continuities exist. Major figures in French art such as J.-A.-D. Ingres and Eugène Delacroix worked from early in the century into the 1860s; Gustave Courbet’s pivotal paintings date to 1848-1855. In short, the mid-nineteenth century exists, as a period, in French art history.

The periodization I learned about in Russian art gave me the impression that the eighteenth to early nineteenth century, as a cohesive era, culminated in the “great masters” of the period: the portraiture of Orest Kiprenskii, the history paintings of Karl Briullov and Aleksandr Ivanov, and the genre scenes of Aleksei Venetsianov—peaking, that is, in the 1830s, with a slight afterglow into the 1840s.

The second half of the century didn’t really get started until Vasilii Perov’s socially critical realist paintings in the 1860s, and the Revolt of the Fourteen, the students who walked out of the Imperial Academy of Arts in 1863 to start an independent artist cooperative. The 1840s and 50s were a void, a sort of artistic no-man’s-land. Pavel Fedotov—whose wry genre scenes appeared in only four exhibitions from 1848 until his death in 1852—was a flash in the pan. In fact, the middle of the century also saw the deaths of Venetsianov (1847) and Briullov (1852). Ivanov died in 1858, shortly after the anticlimactic unveiling of his Appearance of Christ to the People the previous year. It was a period of ending and absence.

Or was it? The more I read and saw, the more I found interesting things happening during the 1840s and 50s. Maybe it was not a period of great masters producing great masterpieces (Ivanov as a highly arguable exception), but it was a time when the visual arts increasingly became a part of Russian culture. The Moscow School of Painting and Sculpture opened in 1843, and even though Petersburg’s Academy regulated it into a subordinate position, the school’s instructors, exhibitions, and graduates brought new vigor to the art scene in Russia’s historic capital. Beyond the capitals, provincial schools at mid-century were turning out competent artists who painted for churches and supplied portraits, landscapes and genre scenes to local landowners, merchants, and shopkeepers, as well as regional fairs. Calling this activity a provincial art market might be a stretch, but the visual arts were definitely becoming more accessible to an interested public. The first illustrated periodicals produced in Russia, Nestor Kukol’nik’s Illiustratsiia (Illustration, 1845-49) and and Vasilii Timm’s Russkii khudozhestvennyi listok (Russian Art Paper, 1851-62) brought images from the news, portraits of notable figures, and reproductions of art works to a wide audience in the capitals and provinces three times a month. So if it was not a period of “great” art, it was certainly a period of mid-market art becoming available to middling viewers.

The art world in St. Petersburg also picked up mid-century. The Academy’s triennial exhibitions became annual events, while more and more picture shops popped up in the center of town. Art collecting became a public spectacle in 1851, when the Academy of Arts held the eye-popping Art Exhibition of Rare Objects Belonging to Private Individuals (Khudozhestvennaia vystavka redkikh veshchei, prinadlezhashchikh chastnym litsam…). The show was huge, with over a thousand objects on view. For the first time, the middling classes could catch a glimpse of elite collections that were usually locked away in aristocratic palaces. It was a good time to inspire non-elites to start collecting because there were more opportunities to buy art in picture shops and at auctions—not only original works, but also less expensive copies and print reproductions.

When I spent a year in Russia for dissertation research from 2007 to 2008, I was tracing a thematic subject across the entire nineteenth century, but every art historian I met would immediately ask whether I was focusing on the first half of the century, or the second. I soon learned to respond that I was working on whichever half that they specialized in, simply to make the conversation more productive. By the end of the year, though, I got tired of the question, with its implication that the two halves of the century were different planets, when in fact they were just different museum departments. A few times I responded that I was working on the middle of the century, just to see what they’d say. I don’t know if that was productive for our conversation, but it certainly forced me to think about the middle of the nineteenth century and how it connects with what came before and after.

Since that time, I’ve learned that colleagues at the Russian Museum and Tretiakov do work on mid-century artists and collectors, but their employment in the early nineteenth-century departments aligns their work with the first half of the century. I’ve also realized that the focus on “great masters” and the century’s division into two distinct halves is somehow connected. The undistinguished portraits, landscapes, and genre pictures produced during the middle of the nineteenth century by middling artists for middling tastes were not great by most standards, but they were the pictures that the vast majority of Russians got to see.