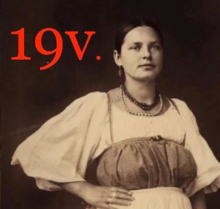 Sara Dickinson is an Associate Professor of Russian Literature and Culture at the University of Genoa (Italy).

Another reason to study minor writers is that they help us to understand historical eras. They are part of the thick description of a given time. For the major-centric among us, minor writers can be seen as important for what they can tell us about major writers, although the relationship is not always cristalline. Even major writers had to read something, after all, although they might not tell you what it was or how it influenced them. Just as Pushkin would not have told you that he’d devoured the novels of Sophie Cottin (as Hilde Hoogenboom has explored), so did Tolstoy play down Mariia Zhukova (as discussed in Part I), while both Turgenev and Dostoevsky borrowed plot motifs from authoress Evgenii Tur (Jane Costlow, Svetlana Grenier).

To illustrate the volatility of literary majorness and the omnipresence of minorness, we can examine this well-known photo from February 1856, which ostensibly captures in a single frame the “who’s who” of Russian letters at the time:

This photo itself speaks to the sheer power and prestige that writing had at mid-century, with the rise of print media and the expansion of publishing and of commercial distribution networks. These are Russia’s finest, the writers associated with the era’s most prestigious literary journal, Sovremennik (The Contemporary), men whose work is well-known or quickly becoming so. They seem to exude self-assurance and pride at being representatives of the literary intelligentsia in the brand-new era of Alexander II, and even to betray a heady touch of the corporate sensibility that increasingly came to alarm state authorities as the social and political scene in Russia began to heat up. The Crimean War has just ended, a new tsar is at the helm, and on the eve of the serfs’ emancipation and other sweeping reforms of the 1860s, these men are poised to play a leading role in a newly dynamic society. But who are they?

Pushkin and Lermontov are absent, of course, having perished in duels (1837, 1844), while Gogol’ died in 1853, by then estranged from the Sovremennik group. Leskov has not yet begun to write and Chekhov is not yet born. And most of the renowned masterpieces of “Russian realism”, the most well-known products of Russian literature’s nineteenth century, have not yet been written. In fact, this photograph is striking for the peculiarity of the moment that it captures.

Front and center left sits Ivan Turgenev, slightly larger than the others, as if the size of his head and body here correspond to his comparatively greater literary renown and social confidence. With a career that began in the 1830s, Turgenev is the most established member of this group and his craft was built on a solid socioeconomic foundation. That said, Notes of Hunter, completed in 1852, foregrounds Turgenev’s populist sympathies, and when this photo was taken, readers were just delving into Rudin, the first of his many celebrated novels, which had just appeared in Sovremennik.

Behind Turgenev stands the young Tolstoy, a rising star enjoying a rare season in the midst of the Petersburg literary world that he would later reject. Tolstoy’s military garb befits his status as war veteran and author of the acclaimed “Sevastopol stories“, the final installment of which had appeared in Sovremennik only a month before, under the signature “Count L. Tolstoy.” No longer “L.N.” or “L.N.T.”, Tolstoy was coming into his own as an author. His unsociability is as yet embryonic, as is perhaps a sense of rivalry with Turgenev, to whom he had recently dedicated a short story and whom he would in many respects surpass over the course of the next decade. By slightly rotating his torso, crossing his arms, and looking away, Tolstoy both (inadvertently?) brings his sword into view and suggests indifference to the man seated before him. Despite such apparent nonchalance, he had been instrumental in arranging the photo shoot and later took care to collect the others’ signatures on his own print as a memento.

Seated behind Turgenev is Goncharov, whose very successful first novel (A Common Story), as noted in Part I, describes a young man from the provinces who moves to Petersburg hoping to become a famous poet or novelist. The young man’s uncle derides his juvenile writing, however, pulling down a barrier between real writers and would-be writers with a resounding clang. Young Aleksandr eventually finds other paths to move forward, hitting his writerly stride by working through practical topics relating to serf agriculture. Hailing from a provincial merchant family, and once reputed by Turgenev to “reek of the meshchanstvo” (a characteristic he supposedly shared with Dostoevsky), Goncharov himself was a firm believer in literary gatekeeping. He had moved to the capital to pursue a career in state service, a personal and professional trajectory that distinguishes him from the other men in the room. As state servitor, Goncharov would later assume a post in the censor’s office that would allow him to review and critique the work of those around him here.

But February 1856 marks a sunny moment in the often testy relationships among these writers, all major figures and photographed in a season of great camaraderie, as Goncharov’s casual arm on the back of Turgenev’s chair suggests. And none of them know what the future will bring. Within another decade or so, Turgenev will have insinuated himself into literary and artistic milieux abroad (a strategy, some argue, leading to his tenacious hold on third place in the major leagues of realist prose, after Dostoevsky and Tolstoy), Tolstoy will be entrenched on his estate at Yasnaya Polyana, far from the madding literary squabbles of the capital, and Goncharov will nurse a conviction that Turgenev has stolen his ideas and shared them with Flaubert.

That leaves the three men to the right, also major writers at mid-century, none of whom are household names today, at least outside Russia. Seated before Turgenev is Aleksandr Druzhinin, author of the Sandian novel Polin’ka Saks (1847). Turgenev praised Druzhinin’s nice manners, considered him a social equal, and believed that he showed great promise, but Druzhinin sunk back into the minor leagues: in the polarized 1860s, he refused the primacy of radical politics over art, choosing a more defiant road than Turgenev’s own before dying an untimely death in 1864 at the age of 40. A minor writer, one lacking political perspicacity, or the victim of historical accident?

Leaning over the stove is Dmitrii Grigorovich, whose stories and sketches with their attentive depictions of peasants and the urban poor have since been relegated to the minor leagues, though it is hard to imagine that Turgenev, Tolstoy, or Dostoevsky would have been capable of (or even interested in) producing their own more renowned portraits of these segments of the population without having Grigorovich’s striking example to emulate. But when Grigorovich’s strides failed to mark out new territory, whether for ability or timing, all three managed to extricate their feet from the tracks of a writer now often regarded as a talented one-trick pony.

Our last writer, seated on the far right, serves to remind us just how pointless all this controversy about majors and minors can be. This is the ascending playwright Aleksandr Ostrovsky, whose claim to majorness is undisputed in Russia, though he remains a cipher abroad. Ostrovsky, who was up to his neck in the specificity of social dynamics and class identity in his own historical era, is arguably as “untranslatable” as Pushkin, although Pushkin’s significance reaches far beyond Russia, while Ostrovsky abroad hardly exists. Is he a major writer, or a minor one? Readers in different parts of the globe would be hard pressed to agree on what to do with him.

This 1856 snapshot is also fascinating for what it leaves out. Neither of Sovremennik‘s editors, Ivan Panaev or Nikolai Nekrasov, is shown, though both were writers. Panaev has since become mired in minorness, while the importance of Nekrasov, like that of Ostrovsky, is widely acknowledged in Russia and largely ignored elsewhere. Also missing is Avdot’ia Iakovlevna, Panaev’s wife and Nekrasov’s lover, who actively contributed to the journal under the name “V. Stanitsky” and is only now being rediscovered. Another unpictured writer is Aleksandr Herzen, who managed to make a name for himself outside Russia, albeit primarily as a political philosopher. Herzen left Russia for good in 1847, shortly after the appearance of his novel Who Is To Blame? (1845-1846), and eventually settled in London where he wrote and published texts that were often too radical to circulate freely in tsarist Russia. This activity, coupled with his place of residence, undoubtedly influenced Herzen’s visibility for an international readership.

The largest elephant not in the room is Dostoevsky, of course, who at the time was serving a sentence of exile in Siberia. Dostoevsky’s output has up to now been uneven: several stories were published in Sovremennik and elsewhere before his 1849 arrest, but not all were well received. As noted, his entrée into literature’s inner circle was not smooth, and he never enjoyed easy relationships with the journal’s editorial clique. Indeed, in distant Semipalatinsk he is already plotting to take up a career in publishing upon his return that will allow him to make his own decisions about what and how to write. These future publishing activities will definitely help him to secure him a spot in the major leagues; his journals will also bring an impressive number of woman writers to light although most of them later slip back into darkness.

For all its lacunae and partiality, this rich snapshot is testament to an age and contains dozens of traces illuminated in a flash: the crisscrossing paths of major and minor writers as they ascend and descend the evaluative scales applied to them, a wide variety of stories, both lived and invented, examples of how specific human lives and processes of artistic creation intertwine with historical events, examples illustrating the mechanisms that can determine majorness and minorness. None of the men pictured here has the slightest inkling of what is going to happen in the future that is more familiar to us, of course. They don’t yet know that Turgenev will write Fathers and Children or Tolstoy War and Peace or what Dostoevsky will produce when he returns to Petersburg. Nor do they know that Nekrasov will soon embrace the progressive spirit of the times and select a more radical direction for Sovremennik, ushering the tempestuous 1860s onto the pages of the journal and shattering their convivial tranquility. Or that in a few decades this historic photograph will become a curosity requiring effort from future generations in order to recognize all members of the group. Acclaimed in 1856, they have no idea who among them will go on to be considered important in another decade, much less in our day, 165 years later, and in an international arena. But they all do know a great deal about minorness and about their own minorness — much more than we do, in fact: the minorness that lies beneath the surface of this photo and lurks around its edges, a minorness that each knows intimately, that each is still slogging through.