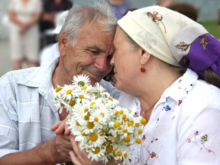 Diana Dukhanova is a Ph.D. student in the Department of Slavic Studies at Brown University, where she is completing a dissertation on the history of sexuality in the Russian Orthodox Church, as well as an instructor of Russian at the College of the Holy Cross. She also holds an MA in Religious Studies from Brown University. She blogs at russiareligionwatch.squarespace.com.

On Friday, July 8, Russia marked the ninth annual Day of Family, Love and Fidelity[1], a hybrid Church-State holiday with origins in the ancient city of Murom. It is celebrated on the Saints’ Day of Peter and Fevronia, that city’s mythical medieval rulers and the historical protectors of marriage and family in Russian Orthodoxy[2]. The holiday is a yearly showcase of a Russian familial ideal that both the Orthodox Church and the State zealously promote: one of young marriage, lifelong togetherness, and frequent reproduction. It also offers a telling glimpse into the contemporary Church-State relationship in Russia, showing both its closeness and the frequent dominance of government powers over the Church.

The award ceremonies make it quite clear that the main aim of the holiday, for both Church and State, is the discouragement of divorce and the promotion of reproduction (pronatalism). Despite frequent claims to be the bulwark of “traditional family values” in a morally corrupt Europe, Russia has the some of the highest divorce and abortion rates in the world, and has been dealing with a demographic crisis for decades.[10] Evidence that the holiday is more than a symbolic protest against the breakup of the family is the fact that, in recent years, municipalities such as Novgorod, Samara, Saratov and Kurgansk have started to ban (or “strongly discourage”) divorce on July 8.[11] Instead, municipalities now encourage couples to register their marriages on this day. Nearly 2000 couples registered to marry in Moscow on Friday, tripling the number from 2015.[12]

Interestingly, the Russian Orthodox Church itself does not officially support the divorce ban on this holiday[13], and some clergy have spoken out – an example that should give any student of Russian Orthodox Church history a sense of deja-vu, given that the Imperial Russian government enforced canons around divorce in a stringent manner which many in the Church itself opposed, also based on its own pronatalist policies. The disagreement between the clergy and the individual municipalities on this issue – and the decision of municipalities to go ahead with the ban in the name of “traditional family values” – is a prime of example of why it is not quite accurate to speak of the ROC’s “increased power” in contemporary Russia. What the Church has, rather than “power” strictly speaking, is increased visibility – yet, as in the past, it may be used to support deliberate misinterpretations that serve the State’s agenda.

As the holiday divorce ban spreads, the restriction of abortion on the Day of Family, Love and Fidelity is not far behind. Novgorod Oblast’ has turned the week of the holiday (July 8th is referred to as the “day without divorces”) into the so-called “week without abortions”,[14] during which employees of Novgorod medical establishments are encouraged to do whatever they can to discourage women from terminating pregnancies. In addition, the Russian Orthodox youth organization called the Georgians (Georgievtsy) organized anti-abortion protests in 63 regions of Russia on Friday.[15] These protests are one component of an array of annual anti-abortion activities called “Give Me Life!”,[16] supported by the Foundation for Socio-Cultural Activities (whose president is Prime Minister Dmitri Medvedev’s wife Svetlana Medvedeva) and the Ministry of Health.

The Russian media show large crowds at holiday events from St. Petersburg to Murom and beyond. The optics are important, as they represent the “positive” aspect of the pro-family agenda, defined largely by laws and sanctions against the LGBTQ community. The optics of the holiday are also (in theory) a counterweight to the increased popularity of the “foreign” holiday of St. Valentine’s Day which, to the particular concern of the Church and the initiators of the July 8th holiday, celebrates romance for its own sake rather than honoring familial love.[17] But high attendance at free summertime outdoor celebrations, which are not exactly gatherings for fiery sermons, does not necessarily indicate that the holiday is having any sort of influence on beliefs and behavior around the family, or that the large families honored inspire participants towards emulation.

We Are Family (But You Are Not) [18]The holiday is, at present, too new to gauge any long-term effects on individuals – if such effects can be gauged at all. What is important about it at present is its role in a federal family values agenda that is becoming more explicitly Orthodox, and in a Church which sees its own teachings about the family as representative of Russian cultural values as a whole. What is also important is the way in which municipalities such as Novgorod are not only increasing the celebrations of the holiday, such as in Murom and Moscow, but also making the holiday into an occasion for concrete “pro-family” actions with real consequences for their residents. In other words, the Day of Family, Love and Fidelity is not all daisies and devoted elderly couples.

As recently as last year, it might have been easy to dismiss the Day of Family, Love and Fidelity as a rather innocuous example of Church-State collusion in Russia. Given the current ramping-up of cultural and religious isolationism and the increased visibility granted to the ROC by virtue of the suppression of other faiths, such a dismissal is not so simple. In retrospect, the institution of the holiday in 2008 seems a harbinger of the coming crackdown against “foreign” cultural influences, which increasingly include minority religions with Russian roots as well as international Christian groups. Especially given the Russian Orthodox Church’s refusal to attend the Pan-Orthodox (Great and Holy) Council on Crete in June,[19] previous talk of the Church’s leadership in global Christian ecumenicism has shifted to a focus on Orthodox leadership in particular, especially Slavic Orthodox. [20]With the signing of the Yarovaya amendments, the Russian Orthodox Church will become more publicly visible than ever before, while it is not at all implausible that the public celebration of Valentine’s Day could be found in violation of vague anti-extremism laws.[21] What is now largely a novelty holiday has the potential to gain cultural importance. That may not reduce divorces or grow families, but it may well reinforce the notion of Russian cultural exceptionalism based on the putative maintenance of “traditional family values” and increase existing hostilities against nations and cultures perceived to exist in a state of areligious degradation. As ROC spokesman Archpriest Andrei Tkachev said on his television program, the Day of Family, Love and Fidelity is Russia’s protest against Western cultural imperialism in the area of sexuality and gender. “You have gay parades,” he said of Westerners on Thursday, “and we have the Day of Family, Love and Fidelity.”[22]