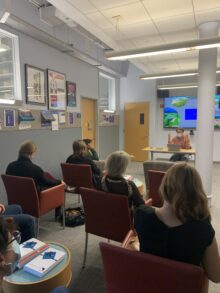 On September 30, 2021, the Jordan Center hosted Dr. Volodymyr Ryzhkovskyi, a Georgetown University PhD recipient and current Jordan Center Postdoctoral Fellow. Dr. Ryzhkovskyi’s research connects empire, culture, and knowledge to Russia and the Soviet’s Union’s place within global history, with a distinct focus on their relation to Western Imperialism and colonialism. You can watch the recording of his talk here.

Ryzhkovskyi’s current book project and the theme of his Jordan Center event, Soviet Occidentalism: Medieval Studies and the Restructuring of Imperial Knowledge in Twentieth-Century Russia, examines the twentieth-century history of medieval studies in late Imperial and Soviet Russia as a model for demonstrating the crucial importance of Soviet appropriation of Western culture and knowledge in the post-revolutionary reconstituting and maintaining the empire following 1917.

Dr. Ryzhkovskyi started by remarking that this work is the result of “15 years of work in stubborn pursuit of one topic” as he foregrounded the centrality of his own biography for his research. Before delving into the finer points and broader ideas of Soviet Occidentalism and how it relates to Empire and Modernity, Ryzhkovskyi provided background on the time and space in which he works. Russian and Soviet institutions of academia and education in the 19th and 20th centuries provide the backdrop for Ryzhkovskyi’s research. More specifically, the people who make up this landscape of his study are the medievalists studying the Medieval West as “an essential representation or parallel of the West” and key intellectual figures of the Soviet humanities.

Ryzhkovskyi noted that, having grown up in Ukraine during the time of its independence from the Soviet Union, he inevitably took ideas of nationalism and empire to his research while living in Saint Petersburg. However, while conversations with Russian liberals during the time of transition from Putin to Medvedev brought a political charge to his work, he found that his studies in the US focused more on filling in niches that bridged multiple fields, such as Empire and Modernity.

Much of Ryzhkovskyi’s research roots itself in the work of Pavel Vinogradov, a Russian scholar of comparative law who, through his own academic successes, taught at Oxford. Vinogradov is described as “always seeing his own comparative and medieval explorations as a part of a project of building and creating an understanding of history for civilized humanity.” Furthermore, Ryzhkovskyi spoke on Vinogradov’s view of Russia’s place in world history – a temporality and history different from that of the West, and how that role can be practically applied when studying global empires.

As a result of Vinogradov’s influential thinking, many Russian educational institutions held members of a growing “imperial network of people who were eager to transform Empire along liberal lines, reflecting what they thought of the British empire, using it as a certain model for the Russian empire.” As the “backward” Russian empire began to modernize, this network of liberal and medievalist scholars could apply the same trajectory of “modernization” that came to medieval Europe to Russia, but allow for them to envision a liberal utopia.

As Ryzhkovskyi’s research developed, he also began to focus on what major differences could be identified in the transition from Imperial Russia to the Soviet Union. This shift in time period also shifts Ryzhkovskyi’s research into questions focused on how culture changed within the Soviet Union. Between 1917 and 1922, the Bolsheviks expanded educational and cultural institutions all around the Imperial space. However, after 1922, certain ordinances began to close down the institutions outside of the capital, further centralizing access to these institutions. This Bolshevik obsession with limiting sources of enlightenment culture coupled with the commitment to spreading it created new Imperial distinctions.