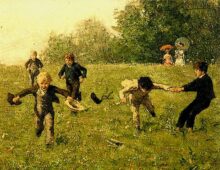 On November 4th, 2021, the Jordan Center hosted Professor David Herman for a talk “Tolstoy’s Orphans.” Professor Herman is Associate Professor and Chair of the Department of Slavic Languages and Literatures at the University of Virginia. His most recent book is titled ​​Poverty of the Imagination: 19th-Century Russian Literature about the Poor, and he is currently working on The Tragic Tolstoy: The Writings after 1876. The talk recording is available on YouTube.

Herman began his talk by explaining cliches about Tolstoy and his writing that he dislikes, not because they are untrue, but because these cliches are repeated more often than they should be, particularly surrounding Tolstoy’s “crisis.” Before his crisis, Tolstoy lived for a “cult” of two things: the authentic self, and its ecstatic union in a perfect marriage with the perfect soulmate. After his crisis, this “becomes an almost exactly opposite cult of selflessness and impersonal cold Christian love.” Herman’s reading of Tolstoy’s crisis is quite different from the common narrative. He believes that the common narrative’s functional elements are correct, but they’re simply combined in the wrong order. The standard narrative is that 2/3rds of the way through writing Anna Karenina, Tolstoy suddenly had an existential crisis and became obsessed with death. This obsession supposedly pushed him towards Christianity, whose pursuit of virtue puts him at odds with his wife, and eventually ruins his marriage. Herman believes that the order should be different: he thinks Tolstoy was profoundly unhappy at this time and “bitterly disillusioned with his marriage” to the point that he decides not that they have irreparably damaged their marriage, but that marriage itself “has been proven bankrupt” and that love between humans is an illusion, and that all people are “badly matched for each other.” Tolstoy came to Christianity in a time of despair and fear. He believed that people can care about God, but they cannot care deeply about one another because humans are innately selfish.

Herman then moved on to the main point of his talk. He explained that Tolstoy himself was an orphan––his mother died when he was 9. Tolstoy believed that it is more painful for a child to lose their mother than to lose their father because mothers provide nurture and care. Herman explained that “in Russia, you don’t need to lose both parents to be an orphan. One is bad enough.” Most of Tolstoy’s heroes are orphans, even if this fact has no impact on the story. In some way, shape ,or form, orphanhood is present in every one of Tolstoy’s writings, you just have to learn to see it.

All of Tolstoy’s characters before his crisis are orphans in this way, all except their lovers, who have parents. Therefore, marriage is an exchange of sorts, a way for the main characters to access the “warmth and connectedness” they desire. Though, the first example of this actually isn’t shown through marriage. In Tolstoy’s trilogy Childhood, Boyhood, and Youth, Tolstoy gushes over his closest friendship, and comes to realize that he wants what his friend has––a close-knit, loving family. Six of his seven major characters in Anna Karenina are couples with orphan/non-orphan couples, and many characters in War and Peace are the same way. The only characters who aren’t like this are Anna and Karenin, who are both orphans––theirs is the “only marriage without a natural warmth” and consequently the only one that fails. Interestingly, all relationships in which both parties have living parents also fail.

Tolstoy’s philosophy is that people are inherently good and all evil comes from the world. Children are born ready to love, perfectly happy and virtuous. Unfortunately, along the way, they learn that the world is not like this. The world corrupts the child so the child grows into an adult with a hard shell. Herman explained that both Tolstoy and Dostoevsky agreed that because of this, victims become victimizers. Yet, while Dostoevsky believed that, if the world is spoiled, then it’s his own fault and he alone must answer for it, Tolstoy believed that the “world is horrible to the self and the self is still young and pure,” so all of that horribleness is the world’s fault. Tolstoy became defensive and put walls up for himself. Herman explained that he “practiced non-love” and became used to it, although it begins uncomfortably.

Many quirks that are hallmarks of Tolstoy’s writing are also characteristics of his characters without mothers. These characteristics include the rejection of convention, being crippled by thoughts of death, not settling for an average marriage and holding out for “ecstatic union,” and writing novels, so the writer can observe rather than participate (most writing is done by the orphans). Epiphanies are also a common occurrence among his orphans, often about the act of escaping from orphanhood. The epiphanies are transitory, fleeting, and impermanent, which is similar to how Tolstoy ends his books. Herman says that “the innate restlessness of the orphan is why Tolstoy can produce a happy ending only by abruptly cutting off a narrative in midstream.” He also says that “in Tolstoy, you have to love life, no matter how much it hurts. the world is too big to change; if something gnaws at us we can only change ourselves.” Unfortunately, orphans cannot overcome their restlessness in Tolstoy’s fiction. Tolstoy’s novels contradict themselves due to orphanhood. War and Peace and Anna Karenina are “vast acts of repression” by Tolstoy to suppress the orphan’s feelings of grievance.

Tolstoy used these books to construct a fairy tale for himself, and at the end of both, the orphan inside gets the better of him and he realizes that life isn’t fair and orphans are left with nothing. The novels always end with the solitary orphaned hero, surrounded by people, frantically yet fruitlessly clinging to their dreams.